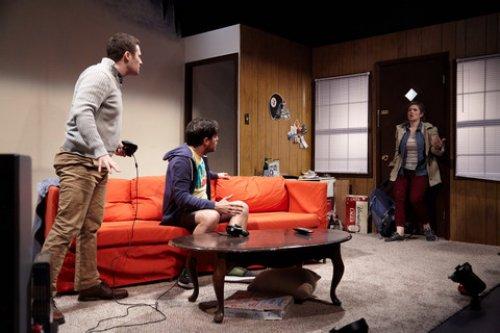 Stultifying on every narrative level is author Alexander V. Thompson’s off-kilter play Pete Rex about two guys and a girl battling a dinosaur invasion with one creature played by an actor in a costume.  Initially one wonders is this a spoof? A satire? An allegory? It soon becomes evident that this is no Rhinoceros.  The twist ending can be seen for miles and definitely does nothing to redeem what has come before.

After watching animated stick figure-like projections of prehistoric males clashing with dinosaurs shown on the small stage’s back wall, we’re in a contemporary man cave. Two men in their thirties are playing the X box game Madden ’07. They say “dude” and “fuck” a lot.

The homeowner Pete is wearing gym shorts and a T-Shirt and is a biology teacher with an Associate’s Degree who wanted to be a paleontologist. Bo is his childhood best friend. Pete has broken up with his long-term girlfriend Julie.  She shows up, interrupting their pastime and informs them of the unexplained appearance of dinosaurs who are on the rampage and causing murderous mayhem.  This is confirmed by the sound of television news broadcasts à la Night of the Living Dead.

After some dramatic events, there’s an intermission. In the second act a large egg discovered under the couch hatches into the British accented dinosaur Nero.  There are more conflicts until the not-unepected surprise ending that strives for significance. 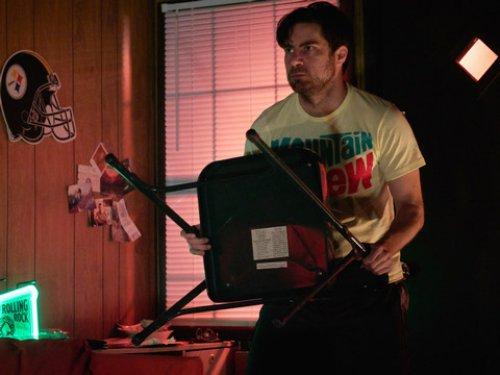 Mr. Thompson peppers his tiresome and unsatisfying scenario with attempted Neil Simon-style stylings that flit by with little effect. Rendering a regal Tyrannosaurus who proclaims eloquently while playing board games would take the talents of a Gore Vidal which are not on display here.

Director Brad Raimondo’s staging efficiently makes use of the compact space so that the actions flow smoothly.  Michael Eisenstein’s fight direction has some striking flourishes especially when Nero and Pete duke it out. The strident performances suit the material.

The cast of Greg Carere as Pete, Rosie Sowa as Julie and Simon Winheld as Bo are all personable and plow on with their hyper characterizations.

Mr. Winheld earns admiration for maintaining his dignity while wearing costume designer Caitlin Cisek’s threadbare dinosaur outfit that looks like it came from a day after sale at a Halloween store. A brown leather jacket over animal print tights, a big floppy animal print tail and a Roman gladiator-type headpiece make up this ensemble.  More successful is Ms. Cisek’s wood- paneled living room with its orange sofa and assortment of furnishings. 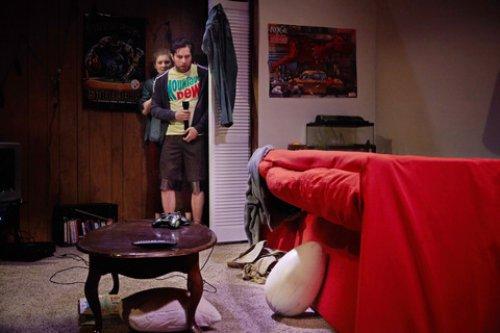 Running time: 100 minutes with one intermission