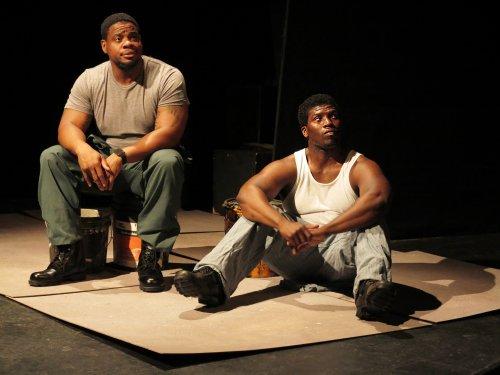 Leon Morgan and SJ Hannah in a scene from “Hercules Didn’t Wade in the Water” (Photo credit: Jonathan Slaff)

In 2005, at a rundown Chicago apartment, we meet the jovial Iraq War veteran Tupelo who now is a construction worker.  He lives with his girlfriend Char (short for Charmaine) who is a nurse in a hospital. The couple work long hours in the hope of saving up to buy a house and start a family. 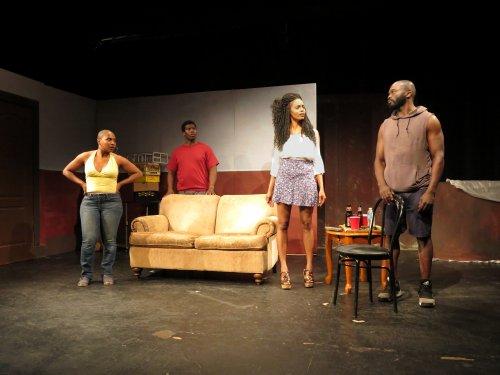 Paying a visit is Char’s cousin Maxine and her husband Eugene. She works in retail and he’s a cab driver. We learn in increments throughout the play about the accidental death of their three-month-old daughter and how this has strained their relationship.

Tupelo soon goes off to New Orleans for a construction job with his wayward cousin Youngblood who hopes to make enough money to pay off a loan shark. Katrina upends their plans. 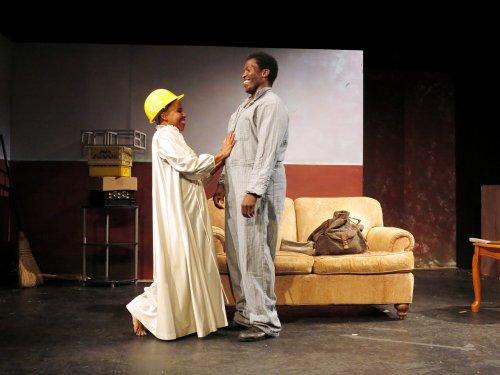 China Colson and SJ Hannah in a scene from “Hercules Didn’t Wade in the Water” (Photo credit: Jonathan Slaff)

With his earthy, expressive and humorous dialogue Mr. Jones renders each character with depth and feeling. Jones structures the play as a series of short scenes that skillfully impart plot points.  Most crucially he explores the theme of striving for upward mobility in the contemporary United States. The obstacles in the way of achieving it are realistically detailed with an optimistic tone. The spirit of Arthur Miller and Lorraine Hansberry are admirably emulated.

At the performance under review, it was announced before the start that due to China Colston’s illness the role of Char would be played by understudy Lynne Michelle. The girlishly feisty Ms. Michelle was amazing and gave no hint of unsteadiness as she delivered a performance of such ease that it seemed as though she had been playing it all along. Michelle conveyed all of the required steeliness and romance. 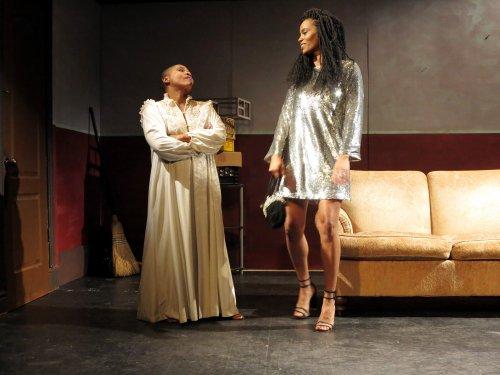 China Colson and Seven Svatomir in a scene from “Hercules Didn’t Wade in the Water” (Photo credit: Jonathan Slaff)

As the play’s centerpiece Tupelo, SJ Hannah is a commanding whirlwind of comedic flourishes and soulfulness.  The intense Adrain Washington is moving as Eugene. Willowy Seven Svatomir has a lively fragility as Maxine. Leon Morgan boisterously captures Youngblood’s haplessness.

Charles Weldon’s fine direction aids these sensitive performances.  Mr.  Weldon’s physical staging is primarily basic as the action is mostly confined to conversations in the apartment. The New Orleans scenes take place on a small area of the stage with some buckets and are gripping. At this early preview, due to technical glitches the numerous scene transitions were slack causing lengthy interludes in darkness. 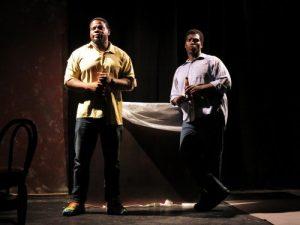 Leon Morgan and SJ Hannah in a scene from “Hercules Didn’t Wade in the Water” (Photo credit: Jonathan Slaff)

Chris Cumberbatch’s scenic design is a well-chosen assortment of furniture and props. Melody A. Beal’s lighting design is straightforward. Sound designer Jacqui Anscombe adeptly renders pop tunes and effects.   Ali Turns’ costume design is particularly effective for the women with a variety of looks that perfectly suit the characters.

Hercules Didn’t Wade in the Water is the winner of the Negro Ensemble Company, Inc.’s 2017 Emerging Playwrights Competition and this is its premiere. Michael A. Jones’ passionate eloquence and the strong performances compensate for the production’s limited presentational values.