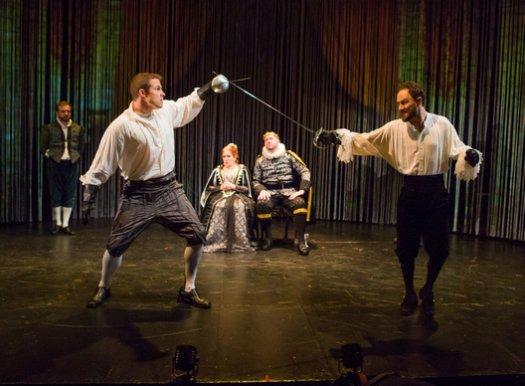 The best selling, Russian mystery novelist Boris Akunin’s streamlined adaptation is a deconstructed take on William Shakespeare’s classic, tragedy Hamlet.  The intention is to examine and focus on the story’s theme of political intrigue.

Mr. Akunin is faithful to the plot and characters, but adds some inventive, counter narrative twists, and his paranoiac denouement quite cleverly reflects a modern sensibility.

The dialogue of Ileana Alexandra Orlic’s English translation is problematic.  Floating around are a few Shakespearean snippets, but otherwise it’s rather stilted.  Without much verbal grandeur there’s a prevalent flatness. There’s not a compelling momentum, and so it never really rises above being a curiosity.  However, overall this play does somewhat succeed as a spirited condensation, especially for those familiar with the original work.

“The Murder of Gonzago” is a well-executed mime sequence.  Polonius’ eavesdropping on Gertrude and Hamlet is creatively done.  The climactic duel is concisely rendered.  However, the gravedigger scene has been excised. 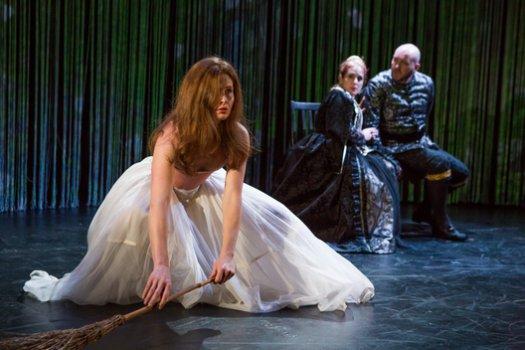 When the audience is seated, eventually actors come out on stage and put on Heather Klar’s dazzling, period costumes.  There’s a lot of of ruffled collars, velvet, capes and glittery details.  Ms. Klar’s ensembles for Gertrude and Claudius are particularly lavish.

The cast mills around chatting with each, and some do warm-ups on the minimally set stage, that’s is configured into a semi-oval by streamer curtains.

These showcase Michael Ivanishvili’s outstanding projection design.  The sections of a huge castle are represented, as well as a coast with rocks and crashing waves.  The King’s Ghost resembles a computer-generated flying creature from a fantasy epic.

Isabella Byrd’s lighting design, Sam Kusnetz’s sound design and composer Giya Kancheli’s original score are all accomplished, and greatly contribute to the hybrid atmosphere of Shakespeare and modernism.  It’s all an invigorating blend of eeriness and straightforwardness.

Director Irina Gachechiladze’s staging is lively, swiftly paced and has an artful precision that would be successful in a production of the actual Hamlet.  Most crucially, Ms. Gachechiladze has gotten pleasing results from an eclectic group of mostly American actors, several of whom play multiple roles. 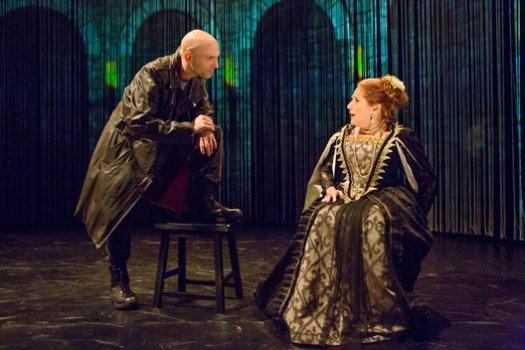 Khris Lewin and Joy Hermalyn in a scene from “Hamlet. A Version” (Photo credit: Jeremy Daniel)

Matt Weiss’s beard and piercing eyes gives him a Middle Ages appearance as Hamlet.  Mr. Weiss is quite animated, and he growls in the manner of Nick Nolte during his solid characterization that’s in keeping with the irreverent tone of the work.

Joy Hermalyn is an excellent Gertrude, conveying all of the necessary regality and fragility.  The British James Phillip Gates is a delightfully droll Claudius.  With his smooth voice and sympathetic presence, Khris Lewin makes for a terrific Horatio.

Alan I. Ross’ Polonius is marvelously pompous, and Mr. Ross shows up to fine effect in his appearances as different characters.  The athletic Michael Hammond’s Laertes is warmly heroic.  In the relatively truncated role of Ophelia, Claire Brownell makes a lovely impression with her expressive eyes, facial features and wistfulness.

Owen Scott and Michael Propster are wonderfully amusing as Rosencrantz and Guildenstern, and exhibit their dramatic talents in several other roles.

Though not as profound as its goal wants it to be, Hamlet. A Version is a worthy diversion.

The Theater at St. Clement’s, 423 West 46th Street, in Manhattan