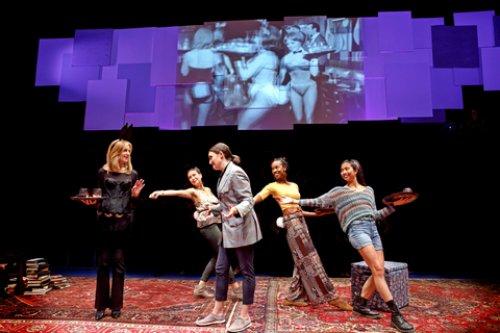 Emily Mann’s new stage biography of iconic feminist Gloria Steinem, Gloria: A Life, is an exuberant two hours of theatrical pageantry. It also works as a crash course on the history of the modern American women’s movement. Directed by Diane Paulus, the show features Christine Lahti as Steinem and a multi-cultural, all-female supporting cast. Nearly all members of the design team are also women.

The play succeeds in part because it takes such an upbeat view of Steinem and her career. Early in the play, the character proclaims herself to be a “hope-aholic”—and her stalwart optimism proves contagious. Yes, challenges to women’s rights have been rife in the last couple of years. But when—at the top of the play—we see projected TV clips depicting the cultural pigeonholing of 1950’s women as wives and mothers and little more, it lends our current situation a welcome perspective. “Is this what some Americans are nostalgic for?” Lahti’s Steinem asks skeptically after these clips are shown. It seems inconceivable that even the most retrogressive critic would answer in the affirmative.

The narrative begins in the 1960’s New York City, where Steinem is a young freelance journalist. She’s not a political animal at this point, but she quickly becomes distressed when editors repeatedly fail to assign stories to her on subjects other than fashion or homemaking. Initially, she brushes off incidents of misogyny, but, gradually, she finds ways of fighting back. We’re shown the notorious episode in which she goes undercover as a Playboy bunny and writes about it—an experience that provokes ridicule but also makes her name better known. It’s wise of Mann to begin with these bracing sequences from Steinem’s early career, only later filling us in on the depressing childhood Gloria endured as the daughter of a woman who suffered from paralyzing and prolonged emotional distress.

As the seasons fly by, Steinem meets and bonds with other feminists and becomes more confident as a public speaker. It’s in scenes from the early 1970’s, though, when she and her “sisters” found Ms. magazine, that the show really takes off. Later, we see her overcome middle-career discouragement, marry (in her late 60’s) and gain a heady sense of freedom as she becomes a senior citizen.

Lahti is not a Steinem look-alike, per se. But there’s something in her carriage, her movements, and her vocal timbre that captures the essence of the real-life Gloria. Costume designer Jessica Jahn’s outfits help in the portrayal. Steinem is known for her sartorial flair, and Jahn has created looks for the actor that are jaunty and sleek. Mostly, though, Lahti succeeds in the role because she’s able to suggest the depth of Steinem’s commitment to the causes she espouses.

The six ensemble members portray an array of characters—female and male, young and old. The juiciest supporting parts are those of other well-known activists who knew and worked with Steinem. These include Dorothy Pittman Hughes (portrayed by Fedna Jacquet), Bella Abzug (Joanna Glushak), Florynce Kennedy (Patrena Murray) and Wilma Mankiller (DeLanna Studi). These performers might well succeed in full theatrical evenings devoted to the lives of the women portrayed. Rounding out the cast are Francesca Fernandez McKenzie and Liz Wisan, both of whom have plenty of moments in the spotlight. 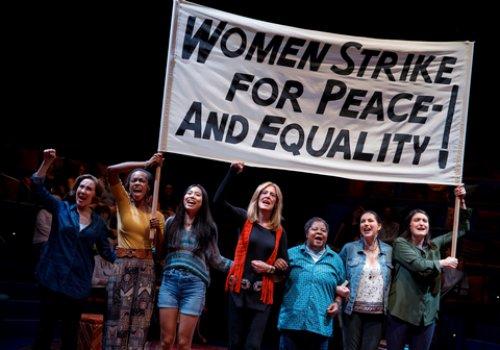 In a big presentational piece like this, which covers more than a half-century of American life, the designers’ work becomes especially important. Amy Rubin’s scenic design is simple but striking: a crazy quilt of Persian rugs with a number of matching hassocks. The lighting design (Jeanette Oi-Suk Yew), projections (Elaine J. McCarthy) and sound design (Robert Kaplowitz, Andrea Allmond), along with Jahn’s imaginative costuming, work together seamlessly to transport the audience through the changing decades. Mann’s script is loose enough to accommodate topical adjustments. For instance, in the performance under review, reference was made to the advances made by women in the November 6 election.

At the end of the evening, you may feel left with a few loose ends. It would be great to learn more about how Steinem’s relationship with Ms. changed in later years. And Mann might have included more of a wrap-up of the lives and careers of Abzug and other aforementioned activists. But one can only cover so much in two hours.

Of that running time, the show’s last 20 minutes are devoted to a “talking circle”: an audience participation segment that incorporates the guidelines set early on by Steinem and her peers for consciousness-raising sessions. Of course, things may go better with these sessions at some performances than at others. At the performance reviewed here, the talk-back was initiated by Nikki Vargas, editor-in-chief of the feminist travel magazine Unearth Women. Some of the audience’s remarks were every bit as fascinating and thought-provoking as the content of the evening’s first 100 minutes.