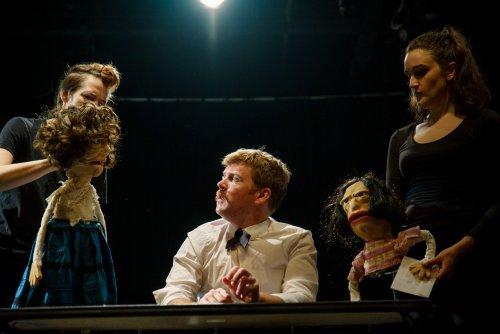 Ambitious but dense, Friends Call Me Albert is an oblique fantasia depicting the life and ideas of Albert Einstein.  There’s grand puppetry, cool stage effects and marvelous performances, but lasting two hours with an intermission, it gets wearying and its impact is somewhat diminished.

Billed as a “bio-epic,” playwright Zachary Desmond emphasizes the epic in his uneven though compelling approach.  Mr. Desmond affectionately imparts biographical details of Einstein’s life from youth to old age.  Particularly captivating are the sequences depicting his courtship and marriage to his first wife, mathematician Mileva Marić.

Winning the Nobel Prize in Physics, abandoning Germany in the 1930’s for the United States, his involvement with developing the Atomic Bomb and his final years in Princeton, N.J., are all presented.  Of course, so is E = mc2.

Rather less successful is the integration of the performance art elements.  Silent tableaus, repetitiveness and rudimentarily choreographed dance bits are tossed in.  There’s a silly and pointless extended scene with the cast all wearing white wigs and gag eyeglasses that goes on to little effect.  Still, Desmond has fashioned a wonderful exploration of this fascinating historical figure.

Director Ryan Emmons adeptly coordinates all of the technical elements into an at times arresting presentation when it doesn’t go off on tangents. 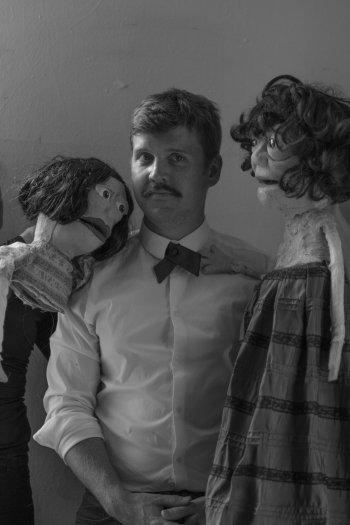 The scenic design by Ryan Hauenstein has the stage bare except for a desk in the center, and a technician at a control board off to the side with strings hanging over.  The black  floor is decorated with white strands.  Periodically an old-time movie screen is pulled down from the ceiling for projections of vintage and scientific images.

Actors writing mathematical equations with chalk on the black walls of the theater are a fun touch.  Most crucially Mr. Emmons has achieved excellent and appealing work from the ensemble.

With the strong presence and gravitas reminiscent of the young John Lithgow, Steven Conroy is outstanding as Albert.  Mr. Conroy has a mustache, his hair is wildly styled and it all creates a strong resemblance. Conroy is highly animated, yet thoughtful, and while speaking with an American speech pattern,  thoroughly captures the essence of Einstein.  His performance is the show’s anchor.

Chris Clark, Alison Novelli and Emily Vetsch are the sensational trio of puppeteers who vocally portray a gallery of figures in Einstein’s life, including his cold parents.  They all appear clad in black, holding puppets with their faces and bodies on view.  Watching them rapidly switch from one character to another is exhilarating. 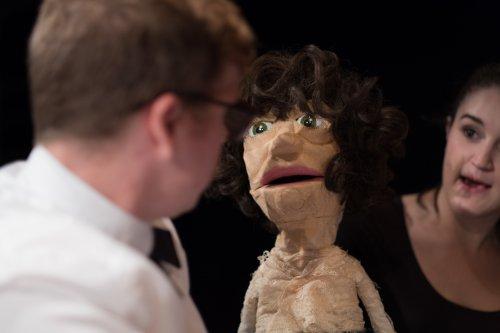 Jen Neads’ fabulous puppets are a whimsical cross between those of Sesame Street and Avenue Q with all of their colorful details.

These optical effects combining with  Enrico de Trizio’s celestial electronic score convey the quality of observing the events float by in the universe.

Despite its overloaded lapses, Friends Call Me Albert is ultimately a rewarding and haunting work of biographical theater.