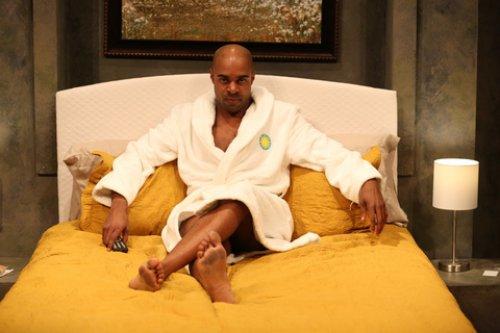 Two, gay male lovers in a hotel room are planning the murder of one’s fiancé to collect the insurance money in Neil LaBute’s amusing and menacing Hate Crime.

Mr. LaBute skillfully dusts off this old film noir premise by combining it with the novelty of the same-sex twist. The charismatic and physically imposing Chauncy Thomas and the animated and goofy Spencer Sickmann are terrific as the two men, vividly conveying their lust for each other.

An upper middle-class American college girl has converted to Islam and is going to Turkey for two weeks to study with a noted cleric. How her family copes with this is the plot of James Haigney’s engrossing Winter Break. This culture clash includes  funny jokes about being Episcopalian and fierce debates about the oppressiveness of radical Islam. 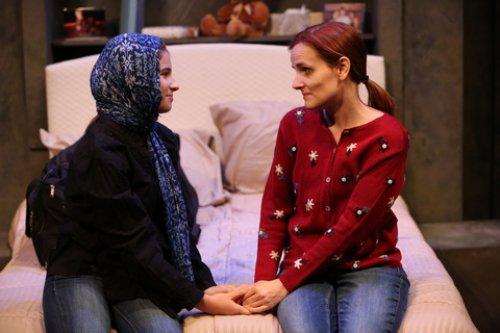 The serene Autumn Dornfeld is moving as the sympathetic mother, the appealingly girlish Kelly Schaschl is forceful as the daughter and Mr. Sickmann is fiery as her gay brother and philosophical foil.

A divorcée and pharmacist, both in their 40’s, are on a first date in Carter W. Lewis’ comical though somewhat convoluted Percentage America. Since a trendy pizzeria was too crowded, they’re at her Washington, D.C. apartment eating pizza, drinking wine and hilariously confessing to their dating profile distortions. They then play a drawn-out game that involves following media coverage of a news story. “I voted for Hillary!” and bits about President Donald Trump’s tweeting firmly establish its topicality.

Ms. Dornfeld is marvelously wacky as the woman, Mr. Thomas is charismatically zany as the man and off to the side, Ms. Schaschi is humorously portraying television news broadcasters.

Director John Pierson has staged all three works with thoughtfulness and strong pacing that realizes the dramatic and comedic aspects of each. Mr. Pierson’s proficient sound design subtly punctuates the transitions from one play to another, as well as effectively rendering effects in them. 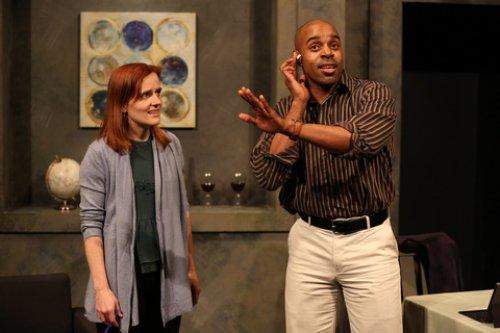 The locales of a hotel room and living rooms are represented by Patrick Huber’s basic but artful set design. Each setting has vibrant details such as paintings and household objects that perfectly fit the situations and characters. Most importantly, the room is able to be reset swiftly between the first and second plays which have no intermission.

Jonathan Zelezniak’s lighting design is appropriately straightforward with its steady brightness. From a white bathrobe, to an Islamic headscarf to street clothes, costume designer Carla Landis Evans’ creations imaginatively depict all of the characters.

With the support of film director, screenwriter and playwright Neil LaBute, the St. Louis Actors’ Studio has held an annual festival of one-act plays since 2013.  This is the third year that the festival has been presented at 59E59 Theaters in New York City, and it’s a very enjoyable program.

Running time: one hour and 40 minutes with one intermission