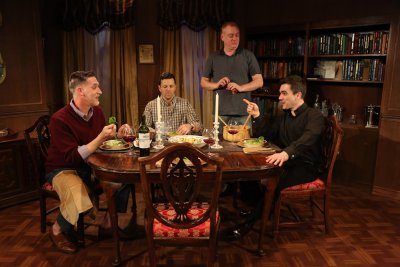 A middle-aged gay couple has oral sex before their younger gay couple dinner guests arrive. Then there is bickering, pot smoking, drinking and pasta.  The jarring twist is that they are all Catholic priests.

Much of Locusts Have No King by J. Julian Christopher appears to be in the well-mined terrain of Mart Crowley’s The Boys in the Band, Edward Albee’s Who’s Afraid of Virginia Woolf? and the works of Terrence McNally.  Gay relationships are explored in blistering detail but gradually there is the Jean Genet bombshell that the action takes place in the contemporary Long Island rectory where they all live.

Advance knowledge of that will not shatter the primary suspense of the play as this surprise is revealed about a third of the way in and sets up more twists.  It is also a debatably necessary detail as it distinguishes this work from numerous other plays depicting the present gay milieu.

This situation is ripe for culturally dramatic possibilities but Mr. Christopher descends into unexplained and distracting outlandishness by taking mystical detours in his narrative. The chandelier ominously shakes at times, a heated rock crashes through a window, and one character undergoes a physical metamorphosis during the apocalyptic finale that is like an overwrought scene out of Tony Kushner’s Angels in America.

Each of the four characters is named for an author of The Four Gospels and they each deliver a soliloquy from those works with a spotlight shining on them.  Symbolism is plentiful and open for interpretation. 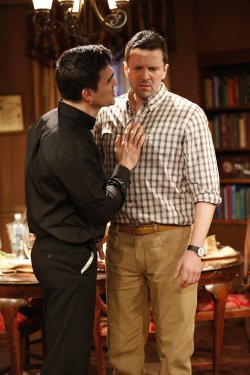 Dan Domingues and John J. Concado in a scene from “Locusts Have No King” (Photo credit: Carol Rosegg)

The locusts have no king, yet all of them march in rank; Proverbs 30:27

This is the Biblical quote where the play’s title comes from and Christopher’s starting point for this religious allegory.

The dialogue is witty and earthy and there is an engrossing Shavian debate about being gay and in the priesthood but the fantasy elements don’t really gel.  Still, the eighty fast- paced minutes are overall entertaining and intriguing if not totally satisfying.

“Any leading lady who doesn’t do a double take when a nine-foot bear asks her to dance is my kind of actress!” was Noel Coward’s immortal compliment to Elaine Stritch regarding her performance in the flop musical Goldilocks.

Here the cast of four talented actors never does double takes even when faced with bizarre occurrences.  Their intense focus throughout the play’s loopy sequences is commendable.  They all also expertly veer from bitchy to philosophical when delivering the stereotypical sexually frank gay banter. 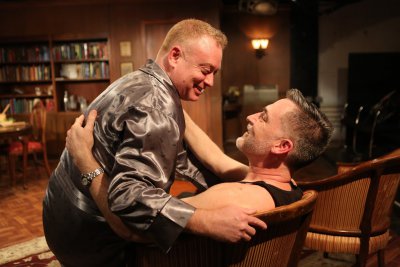 David Grimm and Liam Torres in a scene from “Locusts Have No King” (Photo credit: Carol Rosegg)

As the sympathetic put-upon Marcus, Liam Torres gracefully presents an excellent characterization of a downtrodden aged spouse in a troubled relationship with his wonderful comic timing and dramatic depth.

Jonathan, the jovial and seemingly dominant overseer of the piece is finely played by David Grimm.  Mr. Grimm skillfully navigates through the character’s varying emotional states with breezy assurance.

Dan Domingues’ charisma matches what is needed for the part of Lucus, the agent provacateur of the play.  Mr. Domingues’ sensual physicality, animated presence and dark handsomeness make everyone’s attraction to him totally plausible.

In the considerably difficult role of the sullen Matthew who instigates much of the action, John J. Concado’s halting speech pattern and explosiveness perfectly captures the profound volatility of this pivotal figure.

Director David Mendizabál’s staging vividly theatricalizes the Rosemary’s Baby and The Exorcist style episodes with an inspired matter of fact atmosphere.  Mr. Mendizábal also is highly proficient at creating wonderful stage pictures and tableaus. The cast is perfectly placed during their debate and at all other times.

Locusts Have No King is partly fascinating and partly bewildering.