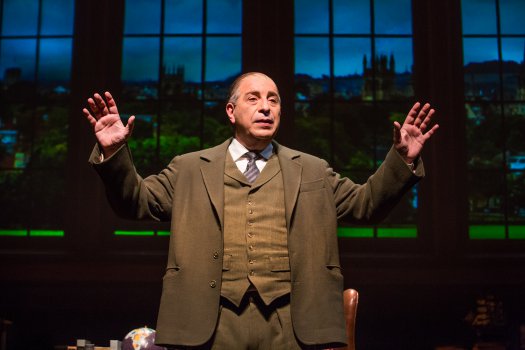 As he impersonates the British writer C.S. Lewis, Max McLean relies on little more than a pipe, a brown suit and tie, and a rather mellifluous voice to become the Anglican philosopher and noted atheist, who famously converted to Christianity in the mid-Twentieth Century. The script was cobbled together by McLean from Lewis’ memoir, letters and books, including other biographies of Lewis, a man who was “intoxicated” by words, which is primarily what this play is about–the mesmerizing effect that words can have, when uttered in an effective sequence.

For those looking for an evening of escapist entertainment, the relentlessly intellectual C.S. Lewis On Stage:  The Most Reluctant Convert will have a less than winning effect. It becomes an exercise in patience to follow the reasoning of a supremely academic and highbrow mind, as it tries to convey, or reconstruct, its conversion from atheism to religious belief, following a new and “ravenous” interest in the “occult.”

Having fought in the First World War–when he was “in the trenches” in France, and wounded by a mortar shell–C.S. Lewis was a man who believed that “religion was invented” and who was “angry at God for not existing.” He even lost his mother to cancer, without sinking “so low as to pray.” But what was “just another mythology, among many,” became a principal focus, once the precocious Lewis had his conversion. 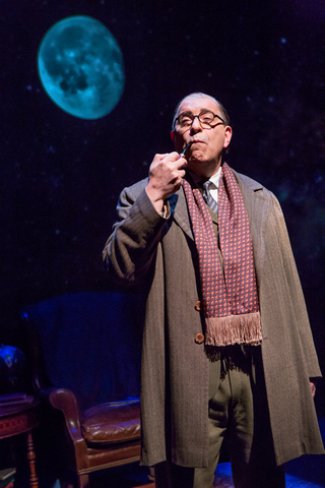 On the other hand, just as Lewis’ father had a mind that “so bubbled that… he had produced his own version of the facts,” one could make the same claim for both Lewis and McLean, and for what McLean is presenting. Neither Lewis nor McLean is trafficking in “facts,” so much as ideas, ideas that have no beginnings and no ends, only endless, philosophical justifications and inquiries.

As co-directed,  by Ken Denison with McLean, C.S. Lewis on Stage inevitably becomes a collection of aphorisms, as much as a one-man lecture about its eponymous writer: “Joy is never in our power and pleasure is…,” “conscious mind is nothing more than atoms colliding in skulls…,” “rock bottom reality had to be intelligent.” (Consider this last notion, in terms of the “alternative” President of the United States that we are currently forced to endure.)

The play is, however, given a very fine production, with stunning–if sometimes overwhelming–projections by Rocco DiSanti, that take us from Lewis’s study or office (strewn with books, of course) at Magdalen College, Oxford, to country scenes. Also projected are portraits of many of the people in Lewis’ life, including the other writers and colleagues who influenced his thinking such as William Butler Yeats and J.R.R. Tolkien. Their images are enlarged whenever Lewis introduces them in his discourse. It was apparently Yeats who led Lewis to the “supernatural” and a “spiritual lust,” which in turn permitted him to become a Christian. 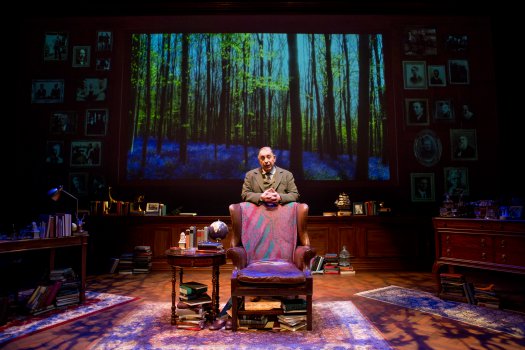 Kelly James Tighe’s set design also walks us, along with McLean, from Lewis’ desk, to an easy chair, and to a credenza, from which Lewis periodically pours himself a drink, from a crystal decanter. The original music and sound by John Gromada further assist in positioning us in Lewis’ walks in the woods or on garden paths, or more usually at his well-appointed office at the university.

McLean is essentially taking us on a walk as well, albeit a predominantly cerebral one. Though I am in no position to say how much he physically resembles or sounds like the celebrated religious philosopher he is portraying, McLean certainly gives the impression of a convincing and brilliant academic figure. (I was specifically reminded of the great John Houseman in the film The Paper Chase.) Though the opening of his monologue was somewhat quiet and muffled and hard to understand, the problem quickly went away.