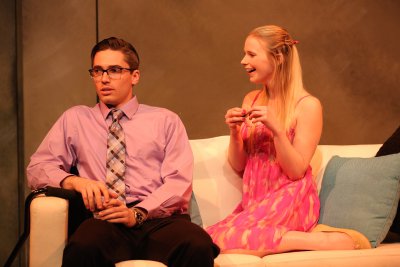 Mark Ryan Anderson and Alicia Smith in a scene from Lexi Wolfe’s “Stand Up for Oneself” (Photo credit: Carol Rosegg)

Three exceptional one act plays and three poor ones comprise this collection selected from the three past editions of the LaBute New Theater Festival that were presented by the St. Louis Actors’ Studio.  They’re performed by a company of six very talented actors who each appear in different roles throughout the program.

The opening one is British author Lexi Wolfe’s delightfully wistful Stand Up for Oneself.  It’s a Chekhovian romantic comedy with clipped Noel Coward-style dialogue taking place in the room of a house where a party is going on.  Lucas, a 42-year-old morose music professor sits alone drinking with his cane nearby when the free-spirited 26-year-old Lila enters. There is flirtation and revelations.  Sensitively directed by John Pierson, the play’s very fine writing is boosted by the wonderfully detailed and effecting performances of Alicia Smith and Mark Ryan Anderson.

Last and least is Kandahar by the festival’s namesake Neil LaBute.  He is best known as the film director and screenwriter of In the Company of Men and Your Friends and Neighbors, and as a playwright for The Shape of Things and Fat Pig.  His formulaic shtick is to weave confessionals with shocking twists.  Here, a young American Sniper-type U.S. solider in fatigues and a T-shirt sits at a table with a bright light shining on him as if at a hearing.  He delivers a monotonous monologue recounting his service in Afghanistan and how it inspired his recent killing spree in the U.S.  Director Pierson and actor Michael Hogan do their best with such heavy-handed material that goes nowhere.  It’s a lamentably weak finale to what had been an overall entertaining production.

Coffee House, Greenwich Village with that as its setting is John Doble’s uproarious black comedy reminiscent of the sensibilities of Elaine May, Jules Feiffer and Christopher Durang.  Typical New Yorkers Jack and Pamela are on a first date after he has responded to her personal ad in The New York Review of Books.  The chitchat gets more and more outrageous and creepy events occur.  Pierson’s expert staging mines all of the comedy and darkness with Hitchcockian precision.  The giddy performances of Jenny Smith and Justin Ivan Brown are a joy to watch and Anderson is hilarious as the supremely obnoxious waiter. 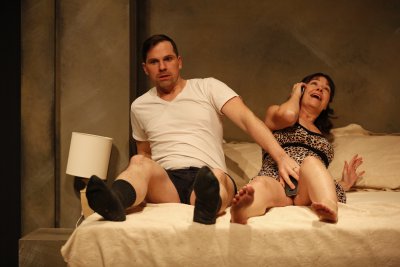 Mr. Brown and Ms. Smith have great chemistry together in Nancy Bell and Peter Grandbois’ topical Present Tense in a bedroom setting.  In this scalding romantic exploration, a man and woman married to others engage in a raunchy cyber clandestine affair.  Communicating by phone and email they let themselves go and achieve sexual and personal fulfillment.  Coordinating the use of laptops, the actors being partially undressed, and the piece’s emotionalism, director Milton Zoth brilliantly realizes all of the play’s funny and moving possibilities.

In the inconsequentially silly The Comeback Special by JJ Strong, a young couple on a cross-country roadtrip stop off in Memphis to visit Graceland. They’re bickering in Elvis Presley’s bedroom and through a metaphysical contrivance they encounter the real Elvis.  Alicia Smith and Michael Hogan exhibit terrific comic skills as the couple and Neil Magnuson is a marvelous Elvis.  They and director Zoth give their all to this extended comedy sketch.

Seemingly an homage to the works of Martin McDonagh, G.D. Kimble’s 30 minute Two Irishmen Are Digging a Ditch is an unpleasant and vague Northern Irish crime drama coated with arch attempts at proverbial mordant Irish wit.  It opens with actor Mark Ryan Anderson as Hagerty. Nude, alone on stage and horrifically made up to show the after effects of a savage beating, he confronts his unseen tormentors.  Mr. Anderson stands sideways and contorted with a hand covering his genitals.  His fierce performance is admirable under these awkward conditions.  Then we meet Evans and Doyle who spout blarney to each other as one digs a ditch.  Magnuson and Brown are amusing and everything is deftly directed by Zoth but the material is unsatisfying.

Patrick Huber’s resourcefully clever, gray walled set design consists of an assemblage of simple furnishings instantly connoting the locations and that are broken down and reset as swiftly as possible to depict the six different settings. Jonathan Zelezniak visualizes the moods and tones of each play with his artistic lighting design.  The variety of garments required to purposefully represent each of the numerous characters is the inspired work of costume designer Carla Evans.

The St. Louis Actors’ Studio’s project of discovering and presenting the work of emerging playwrights is a noble enterprise and the LaBute New Theater Festival is a qualified success in that regard.