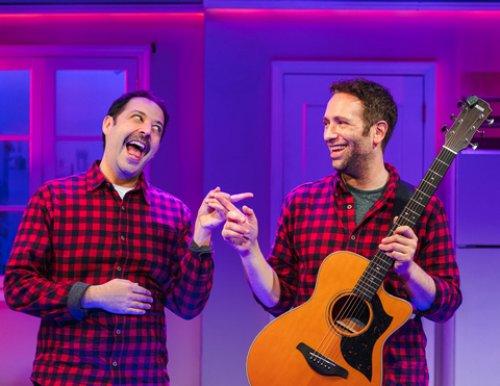 Steve Rosen and David Rossmer in a scene from “The Other Josh Cohen” (Photo credit: Caitlin McNaney)

Cute, whimsical and lightly enjoyable, the musical The Other Josh Cohen is hampered by its lack of a compelling plot. “This is the story of a strange piece of mail that changed my life.” After his apartment is robbed, a young New York City schlemiel receives a check from a distant relative for $56,000. This inspires a picaresque set of adventures with Neil Diamond popping up and romance along the way.

David Rossmer and Steve Rosen’s music and lyrics are a pleasant assortment of bright songs in the mode of pop, disco and show tunes, but their book is thin, thought it has a charming tone. There’s amusement and thoughtfulness during the 90-minutes without much impact.

The beaming, scruffy and highly personable Mr. Rossmer is perpetually and joyously strumming a guitar as he portrays the narrator Josh Cohen. As the Josh Cohen in the actual events, the mustached Rosen is equally as delightful while enacting the tale. They’re identically dressed in jeans and plaid shirts and make a winning team. The lively band appears on view throughout. 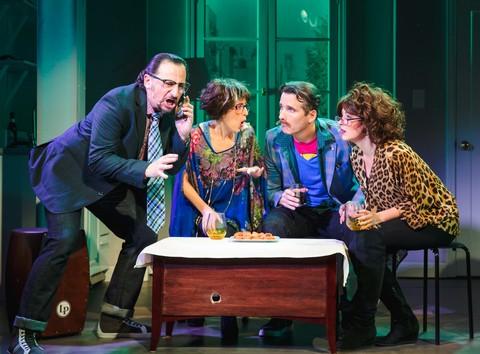 The Other Josh Cohen was originally developed at the New York Musical Festival and premiered in 2012 at Off-Broadway’s SoHo Playhouse where it played for four weeks. It starred Rossmer and Rosen and was nominated for several Drama Desk and Lucille Lortel Awards including Best Musical and for the duo’s writing and acting. Since then it’s been performed at the Paper Mill Playhouse in New Jersey and at Rochester, New York’s Geva Theatre Center.

This latest incarnation proves it to be spirited, innocuous and a mild diversion.