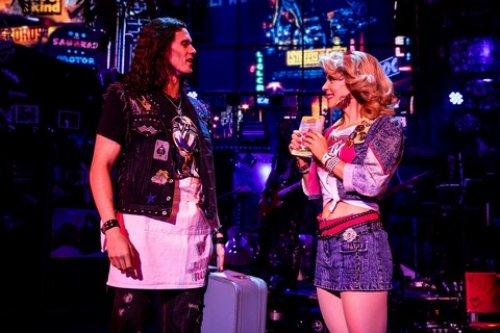 CJ Eldred as Drew Boley and Kristen Scott as Sherrie Christian in a scene from the revival of “Rock of Ages” at New World Stages (Photo credit: Matthew Murphy)

“Pour Some Sugar on Me” by Def Leppard in a smashing live rendition accompanies a lusty production number at a seedy Los Angeles strip club with scantily clad pole dancers and creepy patrons. It’s a splashy set piece in this uproarious Off-Broadway revival commemorating the tenth anniversary of the Broadway hit Rock of Ages.  It’s also notable because previously Def Leppard wouldn’t allow their songs to be included in this 1980’s hit singles jukebox musical. “Rock of Ages” in a recorded version is heard after the show ends and the audience leaves.

A key facet of this rousing presentation is Tom Watson’s sensational  flowing hair and wig design that marvelously replicates the look of those beloved hair bands who ruled the era and that are memorialized in MTV videos.

“Sister Christian” by Night Ranger early on majestically sets the tone of the show as it takes us from Kansas to Hollywood to follow its two dreamers while forcefully establishing the engaging concept. Chris D’Arienzo‘s artful book combines a good-natured unrepentant cliché-ridden scenario complemented by just the right pop classic exactly matched with precise comic dialogue. Mr. D’Arienzo’s sterling tongue-in-cheek work is comparable to the best efforts of musical theater’s celebrated librettists. 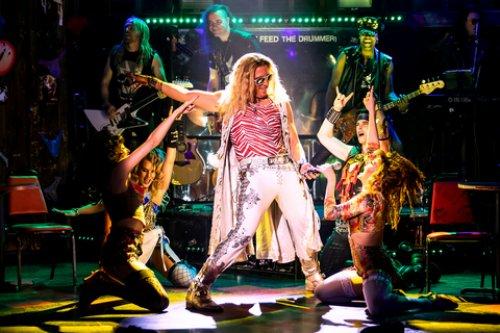 PJ Griffith as Stacee Jaxx and company in a scene from the revival of “Rock of Ages” at New World Stages (Photo credit: Matthew Murphy)

It’s 1987 and we’re at the Sunset Strip’s preeminent rock hang out The Bourbon Room owned by the disheveled, steely though benevolent stoner Dennis. The amiable young barback Drew is from Detroit and is an aspiring singer-songwriter who becomes smitten with the newly employed young waitress Sherrie who has recently arrived from Kansas seeking glamour. Arsenal is a hugely successful band and is breaking up due to lead singer Stacee Jaxx leaving to pursue a solo career and they’re giving their farewell concert at the club. Meanwhile West Hollywood’s corrupt mayor has made a deal with a wily German businessman who has a fey sidekick son to redevelop the area necessitating the demolition of the Bourbon Room. D’Arienzo skillfully ties up all of these hoary threads with goofy flair.

Recreating his role from the original Broadway edition of the impish narrator is the gleefully caustic Mitchell Jarvis. The lanky and appealing CJ Eldred makes a winningly naive Drew. Kirsten Scott is captivating as Sherrie. P.J. Griffith’s Stacee Jaxx is a spot on rock narcissist. 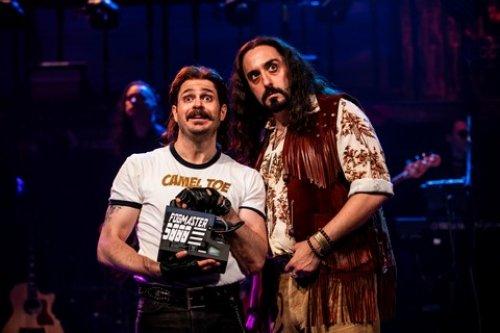 Mitchell Jarvis as Lonny and Matt Ban as Dennis Dupree in a scene from the revival of “Rock of Ages” at New World Stages (Photo credit: Matthew Murphy)

Director Kristin Hanggi’s energetic staging injects playful swiftness and visual variety, landing all of the piece’s humor while maintaining the semblance of synthetic sentimentality. An electric realization of  “Wanted Dead or Alive” showcases Kelly Devine’s choreography which is a euphoric recreation of heavy metal grandiloquence with lunges, poses and parading through the audience.

The theater’s walls are dotted with illustrative neon signs and posters. A collection of knick knacks and a staircase connote the grungy Bourbon Room and are features of Beowulf Boritt’s expressive scenic design.  Lighting designer Jason Lyons’ keenly frenetic efforts appropriately simulate the dimension of a rock concert while simultaneously being straightforwardly theatrical. Sound designer Peter Hylenski amps up the volume to suitably rendering the immortal tunes in all of their bombastic glory. The Hollywood sign, twinkling lights of the LA panorama and starry vistas are characteristic of projection designer Zachary Borovay’s striking imagery shown high up above the set. A variety of leather outfits, dayglow singlets and denim permutations are all components of costume designer Gregory Gale’s fabulous creations that bathe the production in terrific authenticity. 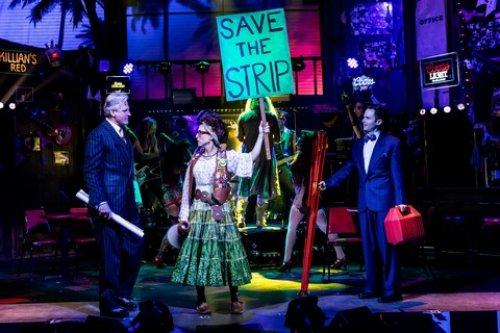 Tom Galantich as Hertz, Tiffany Engen as Regina and Dane Biren as Franz in a scene from the revival of “Rock of Ages” at New World Stages (Photo credit: Matthew Murphy)

Rock of Ages was first produced in Los Angeles in 2005, then had an Off-Broadway incarnation in 2008 and moved to Broadway in 2009 where it ran for 2,328 performances before closing on January 18, 2015.  It was nominated for five Tony Awards including Best Musical. There have been many international productions, but the 2012 screen adaptation was a critical and commercial failure.

Now, Rock of Ages is back again on the stage and this limited engagement is a delightful opportunity to experience its entertaining well-packaged nostalgia again or for the first time.