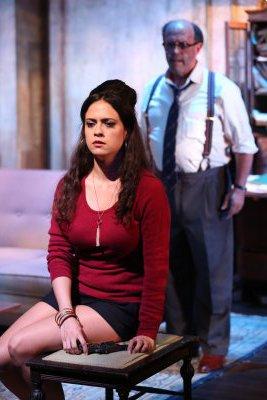 To notice in a program that the show you are about to see was written and directed by the same person usually doesn’t bode well: theater is a collaborative art, and the playwright as well as the audience benefit by having a second pair of eyes–and ears–in on the act. Knowing that Come Light My Cigarette is a musical only adds to one’s apprehension, since Arnold L. Cohen is the only one with a “writing” credit, meaning he wrote the music, the lyrics and the book.

As the story begins to unfold, your apprehensions seem to be justified. After a brief prologue in which we meet Vikki, a 25-year-old prostitute, we meet her father Kevin who manages to tell seemingly much of his life story in a matter of minutes by receiving one phone call after another from six different people, making for some pretty awkward exposition. He’s a Catholic accountant, whose Jewish wife just died. If the second caller is a rabbi, the third is a priest, enabling us to learn that Kevin was an altar boy when he started having sex with a priest. To add that Kevin is sorting his wife’s clothing while he’s singing to us only adds to the awkwardness of the presentation, confirming that Cohen the director has failed Cohen the writer. 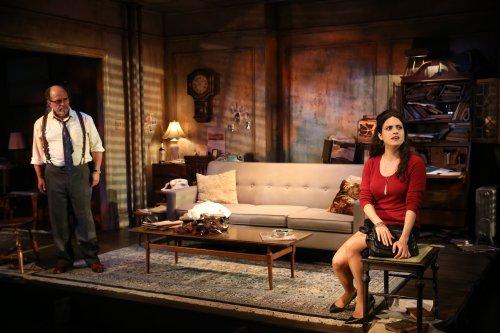 But Cohen the composer is another matter entirely–his jazz-inflected songs make Come Light My Cigarette a gem of a chamber musical. As more and more of the songs are revealed, time and again one is reminded of Trouble in Tahiti. And like that classic Leonard Bernstein opera, Come Light My Cigarette appears to be set in the 1950’s, which the music evokes. So do the busy but impressive set and costumes, both designed by Craig Napoliello.

The book or story of Cigarette only gets worse, however, when Vikki comes home and confronts her father, saying, “Why did you fuck me over and over, night after night, if you’re gay?” And Cohen’s lyrics unfortunately have more in common with his book than with his music. Consider Vikki singing, “When mister Satan had come calling/No stars were out the sky was dark/He cheered a lot because he got/A reaction from me he was hot….” 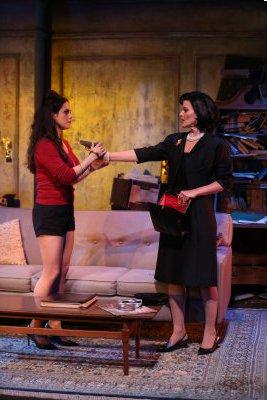 On the plus side, the score’s delights are enhanced by three strong singers. They include the pitch-perfect alto voice of Erikka Walsh as Vikki, the rich baritone of Michael J. Farina as Kevin, and the lovely soprano of Kaye Tuckerman. Decked out in a blue suit and hat that make her resemble Jacqueline Kennedy, Tuckerman is Danielle, a theater producer who met Vikki in L.A., fell in love with her, brought her East and transformed her into a Broadway star.

But Vikki left Danielle, who now wants to renew their relationship. When Vikki refuses, Danielle pulls a gun out of her purse and points it at Vikki, just as Vikki pointed a gun at her father earlier in the show. As fine as their singing is, the three performers can’t really make credible characters out of the mishmash of a story that they have to sing about. But another plus is the evocative lighting design by Ross Graham–as are the contributions of music director Mason Griffin.

Come Light My Cigarette (through September 3, 2017)
The Theatre at St. Clement’s
423 W. 46th Street, in Manhattan
For tickets call 212-279-4200 or visit http://www.ticketcentral.com
Running time: 90 minutes without an intermission