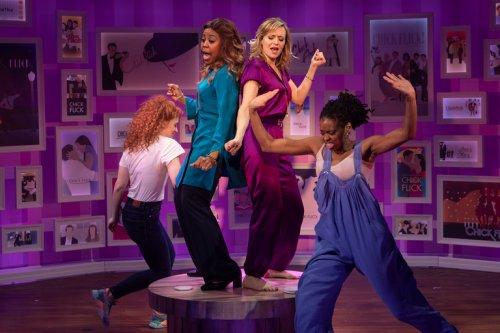 “I’ll have what she’s having” still gets a big laugh after 30 years when it’s quoted by one of the characters in the cheery, tuneful and decidedly bland Chick Flick the Musical. When Harry Met Sally’s immortal line is but one of a multitude of affectionate references to the romantic comedy screen genre to be found here. Steel Magnolias is civilization’s zenith in this show’s stylized and idealized universe.  The walls of the circular stage are adorned with framed posters of virtually every such film ever made. Pretty Woman, Sleepless in Seattle, Moonstruck and so on.

After an absence of a few months, four women best friends in their 30’s and 40’s get together for a movie night. There’s bonding, boxes of tissues, takeout food, Chardonnay, tequila shots, problem solving and a clash over whether to watch Love Actually or The Notebook. Hostess Karen is a high-powered book editor who set aside her dreams of being the next Dorothy Parker and who has a strained marriage and unruly children. Dawn is a single actress with a declining career. Meg is a rising pastry chef. Neurotic singleton Sheila is a greeting card designer.

Suzy Conn’s zesty score is a fusion of her peppy music and well-crafted lyrics. “Quandary” is rhymed with “laundry” and among the 14 bright songs there’s a comical ode to Meryl Streep. Ms. Conn’s upbeat book is an orderly framework charting the everyday predicaments of her plucky stock characters. “I think that the Botox went to your brain!” “What’s next? An evening of Chardonnay and shingles?” are representative of the dialogue’s good-natured wit. The scenario manages to just about sustain its 80 minute length. Conn strives for and achieves a feel-good tone for this escapist escapade. 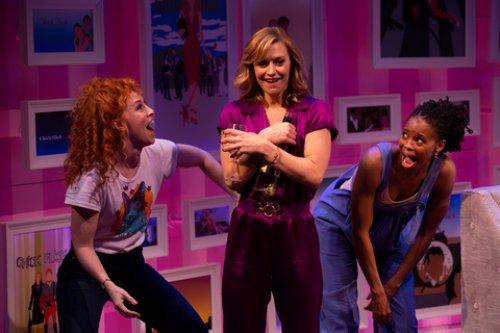 The uniformly vivacious quartet of Sharon Catherine Brown (Karen), Lindsay Nicole Chambers (Sheila), Carla Duren (Meg) and Megan Sikora (Dawn) all have their comedic and dramatic moments of glory. Each has a few solos and there are lively group numbers showcasing their grand camaraderie.

Director David Ruttura and choreographer Sarah O’Gleby bring as much razzle dazzle as possible to the production with their animated presentational flourishes.

Besides the ever-present atmospheric array of movie posters, scenic designer Jason Sherwood’s cool set is a trippy vision of a luxury apartment with its hilariously non-realistic ceiling. There’s also easily moved furniture and moving wall panels that all allow for swift transitions as needed. Jeff Croiter’s lighting design is eclectically charged. The sound design by Peter Fitzgerald gets a bit muddy during some high volume bits but otherwise adds to the lightness. 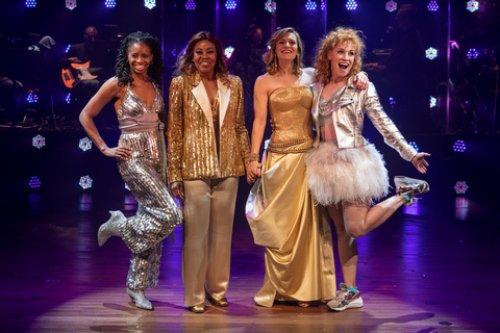 Through its exuberant reverence for the form it pays tribute to, Chick Flick the Musical is a joyous celebration of female empowerment and comradeship that makes for innocuous entertainment.