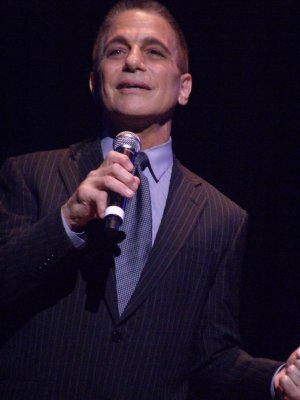 Tony Danza as he recreated “Out of the Sun” from “Honeymoon in Vegas” (Photo credit: Maryann Lopinto)

Hobbling on crutches and with one injured leg encased in a large boot, all due to a recent automobile accident, Sahr Ngaujah made a dramatic entrance from the wings onto the stage of The Town Hall to appear at Broadway by the Year: The Broadway Musicals of 1991-2015. Joined by the accomplished guitarist Ricardo Quinones, the charismatic Mr. Ngaujah passionately sang “Sorrow, Tears of Blood,” from 2009’s Fela! In which he starred.  It was a galvanizing episode that came near the end of a concert that had been packed with powerhouse sequences.

Tony Danza’s breezy and winning performance from Honeymoon in Vegas was cause to wonder why it was a flopped on Broadway this season.  Recreating his role as a mobster he comically and dramatically sang “Out of the Sun,” a wild Sinatra-style tribute to a wife who died of skin cancer.

Jimmy Sutherland’s spectacular tap dancing and unamplified whispery singing of “It Don’t Mean a Thing If It Ain’t Got That Swing,” from the 2013 revue After Midnight, was awesome.  With his frantic but precise steps and his smoldering presence, he mesmerizingly commanded the stage. 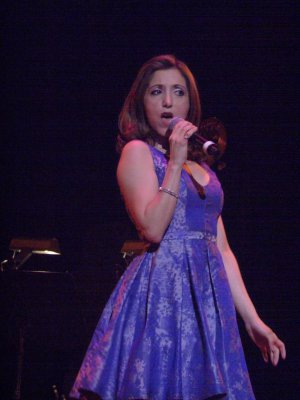 After a lovely rendition of “Feed The Birds,” from 2006’s Mary Poppins, Christina Bianco joked, “Scott Siegel will only allow me to sing one song.  But what about Julie Andrews?”  She then did a hilarious impression of the icon’s take of “A Spoon Full of Sugar.”  This was followed by a show stopping, rapid-fire medley of the musical’s beloved songs where she breathtakingly and raucously recreated the presences of Kristin Chenoweth, Barbra Streisand, Bernadette Peters, Liza Minnelli, and Celine Dion.

Mr. Siegel created Broadway by the Year 15 years ago. It explores a century of Broadway musicals in four annual concerts where one song from one show from each 25-year period is performed.  He also wrote the evening’s informative and witty commentary that as the personable host he delivered from a lectern off to the side of the stage as well as introducing each of the performers.  “This is a reflection of our own memories,” he stated, as the era under review was so contemporary.

Besides Mr. Ngaujah and Mr. Danza, the event had a number of other performers singing songs from shows in which they originally appeared.  Larry Gatlin was a replacement in the title role of the 1991The Will Rogers Follies, and performed a sentimental “Look Around.”  Quentin Earl Darrington starred in the 2009 revival of 1998’s Ragtime as Coalhouse Walker, Jr., and sang a stirring “Make Them Hear You.”  Nominated for a Drama Desk Award for her performance in 1999’s The Civil War, Cheryl Freeman powerfully performed “If Prayin’ Were for Horses.”  Tony nominee Randy Graff for 2001’s A Class Act sang the wistful “The Next Best Thing to Love.”  Jeannette Bayardelle who was a replacement Celie in 2005’s The Color Purple and who appeared in the First National tour of the show, euphorically performed “I’m Here.”  Olivier Award nominee for the original London production of 2010’s The Scottsboro Boys Kyle Scatliffe fiercely sang “Go Back Home.” 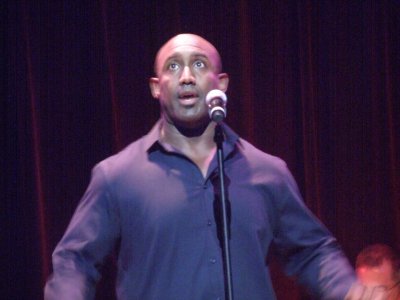 Quentin Earl Darrington performing “Make Them Hear You” which he sang in the 1998 revival of “Ragtime” (Photo credit: Maryann Lopinto)

Bringing it all up to date was Lisa Howard, a star of It Should Have Been You currently running on Broadway.  Her character is always the bridesmaid and never the bride and she forcefully performed the cathartic “Jenny’s Blues.”  Fittingly, that was the final number of the concert.

A clever recreation was by Klea Blackhurst who is renowned for her Ethel Merman homage shows. She sang a robust “I Got Rhythm” without a microphone, just as the Broadway legend did in 1930’s Girl Crazy where she introduced the song.  It was included here because it was featured in 1992’s Crazy For You.

Wearing a black fedora complementing a black outfit, the quirky Gay Marshall engagingly performed the sly “It Never Was You” by Kurt Weill from 2007’s LoveMusik.  The acclaimed opera singer Sarah Jane McMahon did a commanding “The Light in The Piazza,” from the 2005 musical of the same name.  The somber depths of “Pennies from Heaven” from 1995’s Swinging on a Star was strikingly explored by Jeffry Denman with a low-key vocal and simple tap dance moves. 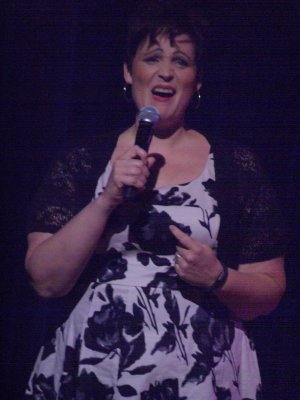 Lisa Howard as she sang “Jenny’s Blues” from the current “It Shoulda Been You” (Photo credit: Maryann Lopinto)

“This is one of those songs black girls don’t really sing,” cracked Denise Spann Morgan who appeared with the duo, The “Marvelous” Marvelettes, before launching into a rambunctious performance of “It’s My Party” that transitioned into one of great emotion from 2011’s Baby It’s You.

The performer on the cover of the concert’s program, the vivacious Kenita Miller delivered a knock out version of the 1918 jazz classic, “After You’ve Gone,” that was in 2002’s One Mo’ Time.

The Broadway by the Year Chorus consisting of youthful members Ally Bonino, Elijah Caldwell, Kristin Dausch, Madeline Hamlet, Mary Lane Haskell, Emily Iaquinta, Ricky Alan Saunders, Ryan Scoble, Hannah Solow, Justin Talkington, and Matt Weinstein wonderfully performed the wry “I Wish I Could Go Back to College,” from 2003’s Avenue Q, and that was the first act finale.  Earlier, Brian Charles Rooney joined them for a thrilling “Into The Fire,” from 1997’s The Scarlet Pimpernel. 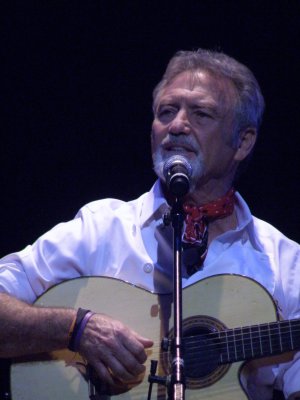 Larry Gatlin as he recreated “Look Around” from “The Will Rogers Follies”’ (Photo credit: Maryann Lopinto)

Other fine appearances included Maxine Linehan with “Tell Me It’s Not True” from 1993’s Blood Brothers, Natalie Toro singing “With One Look” from 1994’s Sunset Boulevard, Jenn Gambatese with “Stop Time” from 1996’s Big, Josh Grisetti with “You Walk With Me” from 2000’s The Full Monty, and Kristin Dausch with “Part of Your World” from 2008’s The Little Mermaid.

That the high volume and variety of numbers briskly moved from one to other without dragging during the evening’s close to three hours running time, was evidence of Scott Coulter’s resourceful direction.  Mr. Coulter also appeared in great form as a performer with “Will You Still Love Me Tomorrow?” from 2014’s Beautiful.  For the tender “Falling Slowly” from 2012’s Once, the excellent Lucia Spina joined him.

A prodigious component of the show’s great success was the supreme musicianship of The Little Big Band.   Music director Ross Patterson led on piano, Tom Holland was on bass and Eric Halvorson was on drums, using Mr. Patterson’s inventive arrangements.  They also performed a sweet instrumental version of “The Journey Home” from 2004’s Bombay Dreams.

With the abundance of talent on display in the very well chosen numbers, Broadway by the Year: The Broadway Musicals of 1991-2015, was a spectacular conclusion to this year’s series. 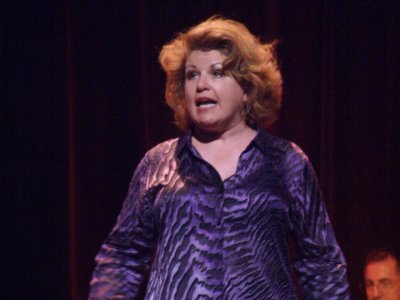 Klea Blackhurst channeling Ethel Merman as she sang “I’ve Got Rhythm” from 1992’s “Crazy for You” (Photo credit: Maryann Lopinto)