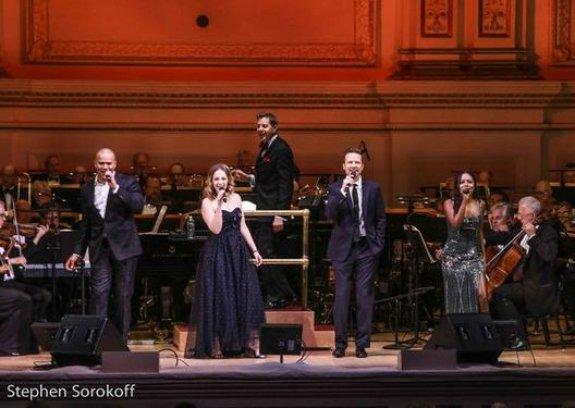 Christopher Jackson, Jessie Mueller, Will Chase and Adrienne Warren with Conductor Steve Reineke as they appeared in The New York Pops’ “You’ve Got a Friend: A Celebration of Singers and Songwriters” (April 21, 2017) (Photo credit: Stephen Sorokoff)

A glorious, instrumental medley of John Lennon and Paul McCartney’s “I Want to Hold Your Hand,” “All My Loving, “I Saw Her Standing There” and “She Loves You,” was the rousing opening number of The New York Pops’ grand concert, You’ve Got a Friend: A Celebration of Singers and Songwriters.

These were four of the five songs that The Beatles performed during their historic television appearance on Ed Sullivan’s show on February 9, 1964.  The selection also had a sentimental aspect, as three days later they performed their landmark concert at Carnegie Hall, where this event took place.

“A really fun mix-tape of some our favorite songs…with no through line,” was how Steven Reineke, the exuberant music director and conductor of The New York Pops, described this delightful tribute to notable singer-songwriters from the past 60 years.

The 78-piece orchestra was appropriately heavy on strings, and the show’s second act opened with a rocking combination of James Brown’s “Papa’s Got a Brand New Bag” and “I Got You (I Feel Good).”  Joining them for the program were four talented guest vocalists.

Aretha Franklin and Teddy White’s anthemic “Think” was an electrifying highlight, as performed by the dynamic Adrienne Warren.  This youthful veteran of several Broadway musicals appears in the television show Orange Is the New Black. The sleek and sultry Ms. Warren’s charismatic gifts were equally evident during her breathy take on Adele and Greg Kustin’s emotional “Hello,” and Alicia Keys’ “If I Ain’t Got You.”

Before her powerful rendition of James Taylor’s “Fire and Rain,” Warren exclaimed, “Dad, this is for you!” after explaining that her father introduced her to the work of the singer-songwriter.

“I’ve been a Beatles fanatic since I was born!” declared Will Chase as he soulfully launched into John Lennon’s “Imagine.”  The Kentucky born, Nashville television star, also forcefully performed John Fogarty’s scorching “Fortunate Son.”  Chase and The Pops amped it for a vigorous treatment of June Carter and Merle Kilgore’s Johnny Cash classic, “Ring of Fire.”  Dedicating it to his daughters, he then commandingly sang Paul Simon’s “Bridge Over Troubled Water.”

Hamilton original cast member Christopher Jackson’s vocal smoothness and physical agility were on great display for Al Green, Willie Mitchell and Al Jackson Jr.’s “Let’s Stay Together.”  Mr. Jackson’s personal affinity for Al Kooper’s “I Love You More Than You’ll Ever Know” enriched his performance of it.  Jackson further showcased his talents in a stirring incarnation of Bob Dylan’s “The Times They Are a-Changin’,” and most compellingly for Sam Cooke’s “A Change Is Gonna Come.”

This terrific quartet united for the first act closing number of Stevie Wonder’s swinging “Sir Duke,” with an audience clap-along.    They ended the show with a magnetic “Ain’t No Mountain High Enough” by Nickolas Ashford and Valerie Simpson to which the audience sang-along.  Their spirited encore was Carole King’s “You’ve Got a Friend.”