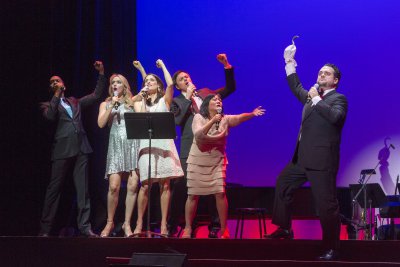 “The road to Broadway can be a bumpy one,” explained Kathleen Marshall, the stage director, writer, artistic director and host of the concert 92Y’s Lyrics & Lyricists Series: A Funny Thing Happened: Songs from the Road to Broadway!

This pleasant show highlighted often very well known songs from Broadway musicals that were added close to those shows’ opening and a few that were cut entirely.  Though without an energetic host and with a number of performances that were simply professional, the concert didn’t wow.  When “Comedy Tonight” doesn’t land, things are off.

Lacking innate charisma, the low-key Ms. Marshall amiably recited numerous informative facts and concise anecdotes while standing at lectern off to the side of the stage.  Her periodic commentary was interspersed with performances by the lively cast.

Displaying her flawless vocal abilities, superb comic timing, dramatic range and exuberant presence, Ann Harada was the standout of the six-member company.  She was in the original Broadway cast of Avenue Q and appeared in the recent Broadway production of Cinderella.  Her exquisite renditions included “Getting to Know You” from The King and I, “Do You Love Me?” from Fiddler on The Roof, “Sing Happy,” the 11 o’clock number from Flora The Red Menace, and “Distant Melody,” from Peter Pan. Ms. Harada vividly demonstrated her delightful skills throughout.

“Write me something with the kid!” was Ethel Merman’s characteristically blunt request to Irving Berlin the composer and lyricist of Call Me Madam.  Though she was the star of the show she wanted a duet with the talented supporting player Russell Nype.  The result was the clever and complex duet “You’re Just in Love.”  This was another wonderful showcase for Ms. Harada.

Her talented partner for it was the youthful Aaron C. Finley who sang a sweet “Being Alive” from Company. It was previously explained that this was Stephen Sondheim’s fourth attempt at writing the song.  Mr. Finley also sang a soaring version of “Love Can’t Happen” that was one of the 11 new songs the composer/lyricist Maury Yeston contributed to Grand Hotel. 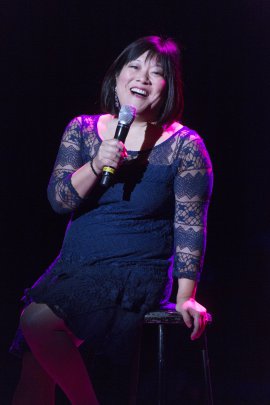 The vocally powerful Darius de Haas made a great impression with his euphoric performance of “Miracle of Miracles” from Fiddler on The Roof and the dramatic “I’ve Been” from Next to Normal.  He was also very spirited during “Extraordinary” from Pippin.

Greg Hildreth conveyed the gleeful cynicism of a show business agent with the zesty “Ten Percent” that was excised from Chicago.  He was also a droll Captain Hook during “Hook’s Waltz” from Peter Pan.

During the California tryout of Thoroughly Modern Millie, the original lead was injured and understudy Sutton Foster so captivated the creative team that she was given the title role and a new song “Gimme Gimme” was written for her. That was charmingly sung by Betsy Wolfe who also did a lovely “Never Neverland” from Peter Pan.

The wonderful musical comedy classic “Vanilla Ice Cream” from She Loves Me was winningly performed by Elena Shaddow and her “The Man I Love,” cut from several Gershwin shows before becoming a standard, was quite stirring.  She and Mr. de Haas did a wistful duet of “I’ll Never Fall in Love Again” that was written in one day during the Boston tryout of Promises, Promises. 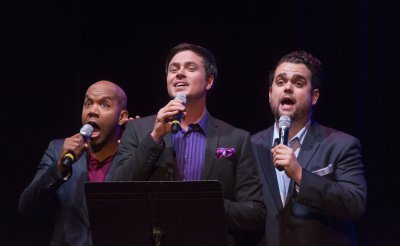 The entire cast performed together several times to very good effect and highlights were a hilarious “Little Tin Box” from Fiorello! and the evening’s  finale of Oklahoma!  That song was originally intended as a duet before finding great success in the show as a company number.

The concert’s opening was “Love, I Hear” from A Funny Thing Happened on the Way to the Forum. Show doctor Jerome Robbins believed that song was inadequate as the first number and encouraged composer and lyricist Stephen Sondheim to write a more upbeat one.   Shortly after, he wrote “Comedy Tonight” which the entire cast performed.  The concert’s second act began with “Elegance” from Hello Dolly also performed by the cast.  That replaced another song from Hello Dolly’s second act.

Other interesting facts discussed included that “Perfectly Marvelous” from Cabaret was strategically created to have a lighter song amidst all of the show’s darkness.  The difficult development of “Younger than Springtime” from South Pacific was recounted, as was how an old melody from that show was later used for “Getting to Know You” from The King and I.  Also mentioned were the permutations of Guys and Dolls’ title song.  Composer Jule Styne and lyricists Betty Comden and Adolph Green songs for Peter Pan were added to that show’s existing score during its Los Angles tryout.  All of these numbers were performed during the L&L show.  Lyricist Sheldon Harnick often went out of town with the scores of his shows such as Fiddler on The Roof with composer Jerry Bock’s work unfinished.

Music director David Chase smoothly led the accomplished band through this collection of eclectic material covering many eras and styles of musical theater.  Steve Kenyon was on woodwinds, Brian Pareschi was on trumpet, Neal Caine was on bass, and Paul Pizzuti on drums.

With its fast-paced presentation and a some exceptional performances, 92Y’s Lyrics & Lyricists Series: Songs from the Road to Broadway! overall made for uneven entertainment.