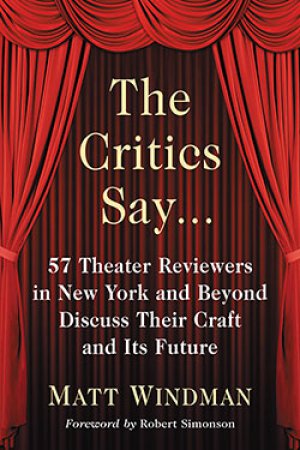 There’s no real reason for theater critics.  It’s not a job that’s essential to the wellbeing of mankind.  It’s just that during the 19th to early 20th century, when Broadway was coming along and becoming a big part of the entertainment business, newspapers decided they wanted to cover the shows that people were going to see.

So declares New York Post theater columnist Michael Riedel in Matt Windman’s The Critics Say…57 Theater Reviewers in New York and Beyond Discuss Their Craft and Its Future.  Mr. Riedel is one of the most pungent of those interviewees in this interesting interspersed compilation.  The explanatory foreword is by former theater critic and former editor of Playbill.com Robert Simonson.

The book is an in-depth exploration of the lives, mentalities, and views of notable writers about theater criticism in the present.  It’s really only for those readers fascinated by an insiders take on the subject.  Finding out what makes New York Times critics Ben Brantley and Charles Isherwood or many of the others tick can be less then riveting.

It also serves as a vivid document of the changing terrain of media coverage of the arts by preserving the thoughts of these “dinosaurs,” as several of them refer to themselves.

Author Matt Windman is a freelance theater writer for the free newspaper amNY and he has interviewed this diverse selection of American theater reviewers, critics, journalists and even blogger Perez Hilton in 2014 and 2015.

In his preface, Mr. Windman also states that his primary source of income comes from his profession as an attorney and not from theater reviewing.  This fact is significant in that many of those in the field today are either unpaid or paid token amounts, often just receiving free tickets and personal glory as compensation. The decline of traditional print professional arts coverage except for a few major outlets such as The New York Times which is being replaced for free by Internet sites and social media is prevalently explored.

Each of the thirteen chapters covers such topics as how they got started in their careers, their writing process, ethical issues, and their relationship to the theater community.  Windman skillfully extracts and weaves together their responses into solid sequences where the reader learns about the technical and personal aspects of reviewing.  Kenneth Tynan, Walter Kerr and Pauline Kael are the critics of the past who are most often cited as role models, as well as former New York Times critic Frank Rich.

There’s an entire chapter devoted to Spider-Man: Turn Off the Dark, the 2011 Broadway musical that became a cause célèbre due to its lengthy preview period. Rehashing this misbegotten show comes across as dated and indicative of over blown self-importance as Windman apparently views it as a call to arms despite the fact that other Broadway shows in the past had tried the same tactic to delay negative reviews.

The chapter dealing with the clash between professional practitioners and the online world includes a discussion of the message board All That Chat.  A few hundred anonymous posters comprised of industry figures, compulsive theatergoers and a cross section of the general public populate it sharing their opinions.  This forum has its detractors and its admirers some of whom believe it is influential on the industry.

Windman places great stock in this site and in his epilogue even extolls one individual who routinely writes unsigned theater reviews there. At his own expense he buys tickets to numerous shows, fashions his posts to resemble a published review and puts them up before a show’s official opening date so he can be first.  Windman deems this unknown person as comparable in stature to the many eminences featured in his book, many of who bemoan this development.  It illustrates his belief of the blurring of the line between professionals and anyone who wants to call themselves a critic that is happening more and more today.

Most of those interviewed write about theater in New York City but regional writers are well represented.  Besides Riedel, of the dozens of writers included in the book several stand out with their articulate and insightful opinions making a consistent impact.

Michael Sommers was the New York critic for The Newark Star- Ledger until he took a buyout.  “We’re a passing breed.  We’re passing right in front of your eyes.  Everybody’s a drama critic now because everybody’s got a blog.  Everybody’s on Facebook.  Everybody’s on All That Chat.  Paying jobs for drama critics don’t exist anymore because everybody’s giving it away for free.  Traditional print journalism is not covering the arts anymore.  Backstage doesn’t even carry reviews anymore.  When times were good I was making over $100,000.  That’s a decent job.  You can get by in New York on that.  It wasn’t huge money but it was good enough.”

In 1993, Peter Filichia became a theater critic for The Newark Star-Ledger.  “When I went for the interview to be the New Jersey critic, they said. ‘The reason we want you is because you are positive.  We want the arts to grow in New Jersey.  We don’t want a mean critic.  We want someone who is really interested in seeing theater flourish in this state.”

Terry Teachout is the drama critic for The Wall Street Journal.  “I am lucky that I write for the nation’s largest newspaper, and have been going about things in the way that critics were a half century ago.  I have so far been insulated from the problems I’m describing.  But outside of me, the people at The New York Times, and a very small number of other newspapers, everybody’s in trouble.”

John Lahr is the former New Yorker critic and author of several consequential books about theater.  “The whole point of criticism is to meet the energy of the artist with an eloquence and elegance of your own.”

John Simon was the critic for New York magazine for over 36 years. Known for his majestically written, often harsh and witty reviews, he is still active at the age of 91.  “A critic should be very thick-skinned.  As I know from experience, if you are a tough critic, people tend to be very unkindly disposed to you in all kinds of ways.  You don’t get invited to many parties.  You don’t get published in many places.  You don’t get a kind word from many people.”

The Critics Say…57 Theater Reviewers in New York and Beyond Discuss Their Craft and Its Future by Matt Windman, Foreword by Robert Simonson

For information and to purchase, visit http://www.mcfarlandbooks.com