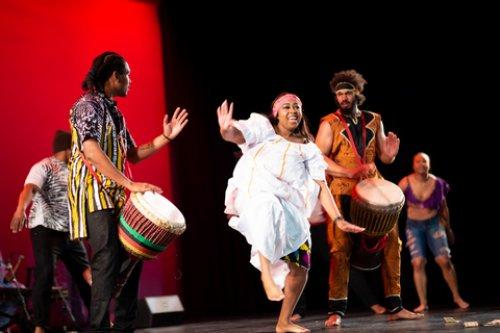 Presented at Symphony Space, the performers of Asase Yaa African American Dance Theater grabbed me immediately with their exuberance and enthusiasm. The dancers, backed by the intense rhythms of African drums, told a thread of a story using mime and movement. Conceived, directed and choreographed by Artistic Director Yao Ababio, it is a universal tale, easily understood, about a young woman and her romantic choices. The charming actor/dancers were N’dack Fleming as The Young Girl, Kweku Sumbry as The Drummer, Lamar Diop Coard as The Dancer, and Maimouna Kane as the caring Big Sister.

The two suitors vie for her attention – one with his dancing, the other with his drumming. Her father turns away both. Neither is good enough for his daughter. But as time passes, shamefully, she discovers she is pregnant. But who is the father? Of course, the girls in the town gossip about her until one of the suitors takes responsibility. And then, there is a happy ending with a white wedding.

The colorful African-inspired costumes were designed by Smokin Mirrorz (that’s the name in program.) The only thing that was subtle about this performance was the lighting by Melody Beale, occasionally changing color and intensity. 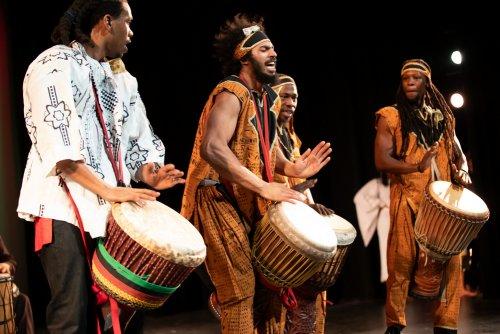 Adding quality to the performance were the especially fine guest artists, Famoro Diabate who played a xylophone-like instrument, Wunmi on the drum, and Missia Diabate whose strong, vibrant voice filled the auditorium. They are included, by the way, on the 2014 album, “Drum Love.” The title song, “The Love,” was used by Ronald K. Brown in his critically acclaimed ballet “The Call,” currently being performed by the Alvin Ailey Dance Company.

The Brooklyn-based Asase Yaa Cultural Arts Foundation is the source of the dance touring company, which has been performing all over the world for the last 18 years. Its mission is to promote Black Culture from its African and/or Caribbean roots, and some of the performers were the children from the Foundation’s cultural performing arts program. Perhaps the highlight of the evening was the appearance of boy drummers whose fierceness no doubt was motivated by the Zulu warriors mentioned on their tee shirts.

This dance troupe is firmly inspired by folk tradition. Their homespun quality is not an example of a ballet or modern dance version of African dancing, but the spirit-lifting movement of a community working together. Part of the tradition is the audience’s response. There was hooting and hollering from the audience, sounding like they were at a rock concert, but it was impossible not to get caught up in the enthusiasm. The general raucousness was a display of the clear delight that the audience enjoyed. It created an atmosphere of unbridled joy and who could resist? Everyone was smiling and laughing and clapping. 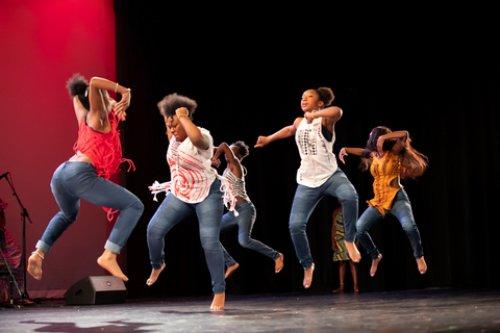 Junior dancers from the Asase Yaa School of the Arts in a scene from the African American Dance Theater’s production of “Drum Love” (Photo credit: Solwazi Afi Olusola)

The performance was a fund raiser, and surprisingly, people literally threw money onto the stage, and sometimes jumped onto the stage to stick a bill onto the sweaty brow of a favorite performer. As much as what was happening on the stage was the total experience which was just so much fun!

If you prefer the careful, serious professionalism of trained dancers, this group may not be to your taste, but if you’re up for boisterous fun, consider the Asase Yaa African American Dance Theater.