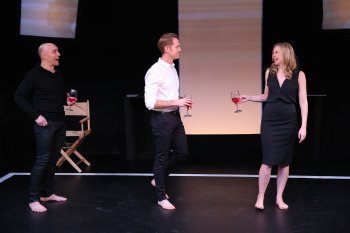 Brendan (NBC’s Blindspot) Gall’s sexy and seductive new thriller, Wide Awake Hearts, thrusts audiences into a challenging game of cat and mouse, as they are left to decipher the story of four friends in a case of art imitating life. An actor, director, writer and actress are faced with the intricacies of dealing with relationships, infused with passion and threats of infidelity, as they are in the process of creating a movie dealing with these very themes.

The screenwriter (played by Ben Cole) instantly charms the audiences with his wit and honesty that proves that this story has absolutely no filter. After making the choice to cast his best friend (Tony Naumovski) to star opposite his beautiful wife (Clea Alsip), he soon becomes paranoid that the intimate scenes they are shooting will translate into real life. When the editor (Maren Bush) comes on board and delves into the history of her on-again, off-again relationship with the actor, this foursome stops being polite and the intensity and depth of their emotions gets real – fast. The chemistry that lies in the partner relationships, as well as those viewing from the outside is explosive, as the audience gets a glimpse at the searing jealousy, anger and insecurity that has been building up and is seconds away from bursting on the spot. 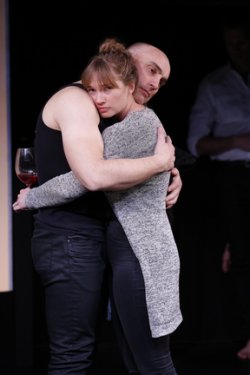 Under Stefan Dzeparoski’s skillful direction, this brilliant cast delivers a piercing and moving portrayal of the toll relationships can take and just how blurred the line between imagination and reality can get when dealing with the object of our affection. The set design by Konstantin Roth, along with projection design by Rocco DiSanti, emphasizes that struggle, as screens play out the scenes above the stage, to further explore the emotions beneath the surface. The costume design also by Roth illustrates the personality of each character as it pertains to the film, with Alsip wearing low-cut clothing to express the sensuality of her character in the filmed scenes, and screenwriter Cole looking sleek and professional as he attend a meeting to pitch his material. All of the clothing and set choices help bring the storyline to life, without being distracting to the inner workings of each character.

While clever and enticing, at times all of the back-and-forth between the acting and their real-life struggles makes it exhausting and difficult to get to the core of each character. The fact that the characters also didn’t have names, adds to that murkiness, but in the end one thing is clear: Wide Awake Hearts will leave you intrigued, pensive and hungry for more.