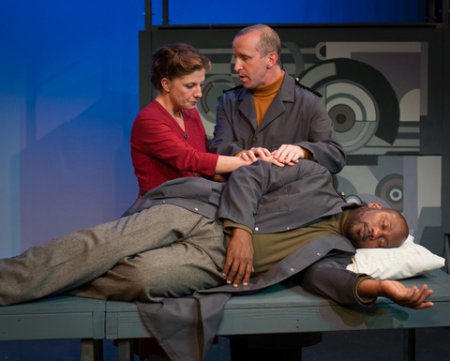 What if robots had been used to fight World War II? And what if they achieved enough autonomy in order to organize? That is the fascinating premise of Universal Robots by Mac Rogers, a playwright who specializes in science fiction themes. Inspired by Czechoslovakian writer Karel Capek’s R.U.R. (Rossum’s Universal Robots) which invented the word “robot,” Rogers’ play is an entirely new one which takes Capek’s premise and goes beyond its original theme.

Universal Robots uses historic characters like journalist and playwright Capek and President Masaryk of Czechoslovakia, characters taken from Capek’s play like Rossum, Helena and Radius, as well as fictional characters to fill out Rogers’ story. Seen in a different version in 2009 at Manhattan Theatre Source under the same name, Universal Robots has a long, leisurely expository first act and an exciting, tense, fast-paced second act. Director Jordana Williams allows the talky, intellectual ‘play of ideas’ in the first half to be a drag on the exciting, adventurous, plot-driven second half with its unusual twists and turns.

Rogers’ play is to some extent an update on the earlier Capek play. However, it also incorporates true facts about Capek’s literary circle making them part of the plot: Capek did, in fact, have a Friday afternoon gathering of  intellectual and political thinkers that met from 1921 through the 1930’s to which Masaryk attended up until his election. After that Capek was part of Masaryk’s shadow cabinet called Hrad or The Castle while the president remained in office. Capek did have a sibling named Jo with whom he collaborated on his early works (here turned into a sister rather than a brother).

The play starts at the conclusion of World War I. The Republic of Czechoslovakia has a vigorous artistic and intellectual community. Leading journalist and playwright Karel hosts a Friday Circle at a unnamed Prague café with writer Salda, poet and socialist Vaclavek, inventor Peroutka and Karel’s sister, the sculptor and playwright Jo where they debate the moral and ethical responsibility of the journalist and the playwright. To this weekly event arrives the new President of the Republic Tomas Masaryk who wishes to tap into this talent resource. 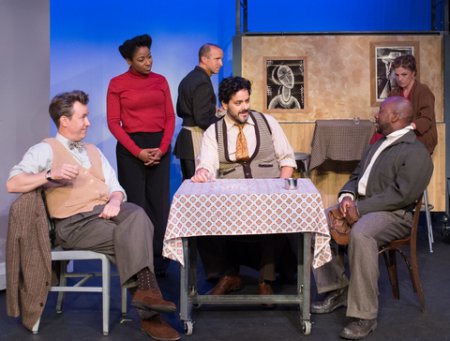 After the opening of a new play by Karel and Jo called The Drudges, Helena, daughter of inventor Rossum, a fan of their work, arrives with a prototype of an automaton, and begs them to get funding from the president for her mother’s work. The president is intrigued but sees a new ethical question in that the new creatures (now renamed “robots”) will create mass unemployment. When World War II begins, the obvious choice is to use the robots as soldiers to stop Hitler’s march on Czechoslovakia. The ultimate problem is revealed: the new robots are now unstoppable and humanity is at risk.

While the relaxed, slow-moving discussion of ethics and morality in the first act becomes a bit of a soporific, the second act which moves with break-neck speed is both provocative and electrifying. The intensity and ease with which the cast of ten play their often multiple roles goes a good way to making this compelling theater. Jason Howard plays both bar-keep Radosh and robot Radius with a conviction which makes both characters believable. As writer, sculptor and moral thinker Jo Capek, Hanna Cheek gives a lovely performance as a woman who falls in love with the robot that has the face of her lover. As both the narrator and as the robot leader, Nikki Andrews-Ojo demonstrates a great range. Jorge Cordova is a stalwart Karel while Brittany N. Williams as Helena Rossum (as well as a later robot named after her) is passionate and intense.

Not all of the roles are equally well written. Tandy Cronyn as inventor Rossum is reduced to playing a one-dimensional scientist. Neimah Djourabchi is rather bland as inventor Peroutka (named for a famous Czech journalist who was part of the Friday Circle). Sara Thigpen is wry as President Marsaryk but is not allowed much latitude for revealing any emotions. Greg Oliver Bodine as both writer Salda and the American financier and political adviser Bernard Baruch and Tarantino Smith as radical Vaclavek and later robot Primus give able support to the extent that their roles allow.

Sandy Yaklin’s fluid set which transforms swiftly from café to lab to government office makes clever use of Constructivist and Avant-garde designs typical of the 1920’s and 1930’s. The rather non-descript costumes by Amanda J. Jenks are probably intentional – considering the characters are intellectuals, scientists and robots who would not worry about how they looked. Jennifer Linn Wilcox’s lighting is suitable for the plot’s public spaces that would be brightly lit. Jeanne E. Travis is responsible for the sound design which includes eerie humming and choral music that help set the mood.

Mac Rogers’ Universal Robots is a fascinating play about the limits of artificial intelligence with a bit too much discussion and talk. With some judicious pruning this play could make an extremely important statement. Nevertheless, if you stick with Universal Robots, you will not be disappointed.

The Sheen Center Black Box Theater, 18 Bleecker Street, between Lafayette Street and the Bowery, in Manhattan