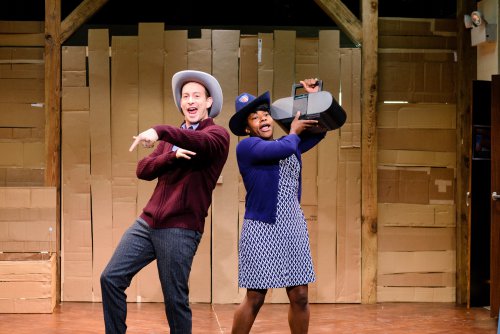 As the terms, “Underground Railroad” and “safe houses,” were code, used by enslaved people of African heritage in the United States from the 1830’s to the 1860’s to escape their horrific lives, so to, is the word “sojourner.” In Underground Railroad Game, sojourner is a “safe word,” which can be called out by the play’s characters, if they need a break when someone threatens to do something too disturbing for comfort. Underground Railroad Game is Neo-Burlesque, but often disconcertingly dark — a “R-rated, kaleidoscopic, fearless comedy” — not aimed at audiences in need of a safe word.

There is currently a plethora of books, films and TV shows out or in the works depicting slavery and the history of the Underground Railroad: Colson Whitehead’s novel, The Underground Railroad; an American television period drama series on WGN about Antebellum Georgia titled Underground; Viola Davis’ HBO telepic on the Civil War activist-spy Harriet Tubman; Nate Parker’s controversial feature film, Birth Of A Nation, about Nat Turner’s slave rebellion; the play, Nat Turner in Jerusalem, concerning a similar theme; to name a few. This confluence of slavery topics and creative works about these topics has been called a “perfect storm.”

Having an African-American President in office for eight years; the racial violence erupting in America in the last few years; the social media campaign, Black Lives Matter; these events seem to be the catalyst for retelling the horrors of slavery. However, they have also been the impetus for relating stories where white and black Americans have worked together effectively for more than several decades on what essentially was guerrilla warfare – the Underground Railroad. 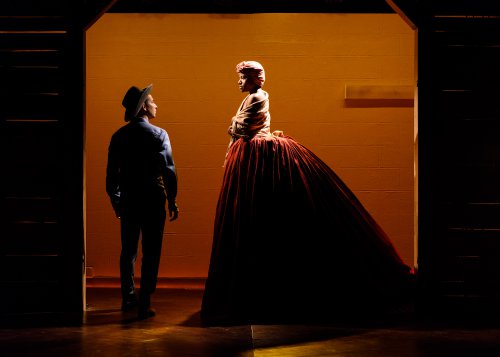 People often reflect more on political events when there are moments of racial tension and anniversaries. Since the 150th celebration of the American Civil War’s end in late 2015, America has felt more compelled to look back and rediscover civil rights history, both pro and con. With Underground Railroad Game, the playwrights Jennifer Kidwell and Scott Sheppard cross their own Mason-Dixon line with their provocative satirical approach to what a contemporary Underground Railroad “game” might offer.

Underground Railroad Game owes its conception to Scott Sheppard in his remembering of one of his fifth grade history class lessons. When his Hanover, Pennsylvania, elementary school covered the American Civil War, he recalled his teacher drawing upon a game that was found everywhere among young people — a new form of cowboys and Indians, called Underground Railroad. Hanover, in fact, was located near Gettysburg, and Civil War references were ubiquitous.

Sheppard recollected that in the Underground Railroad game his fifth grade classmates were designated to be either Union or Confederate soldiers. The Yankees (Union) tried to covertly run slaves (portrayed as “black dolls”) from a classroom “safe house” to another classroom “safe house.” The Rebels (Confederates) endeavored to prevent the Yanks from accomplishing their mission. The end goal was to secret slaves or dolls to Canada (a school lobby glass case filled with memorabilia served as Canada).

Sheppard and Kidwell re-enact in the play their own version of the Underground Railroad game, with ironic (and often shocking) twists and turns. They are Teacher Stuart (white) and Teacher Caroline (black), middle- school faculty staff instructing Hanover students. Both actors cleverly perform the schoolmarm roles, as well as venture adroitly into vaudeville and burlesque, without a moment’s pause. 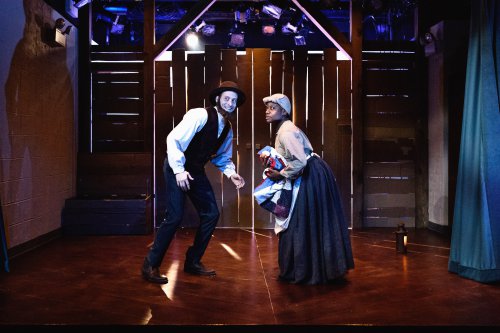 A series of related sketches, more than scenes, transport the two teachers back and forth in time and setting. Comedic mini-dramas unfold in both a history classroom and places referenced in the history lessons. The vignettes often erupt in song, dance and astonishing revelations that allow for Neo-Burlesque fantasy sequences — idée fixe, both romantic and fetishistic.

The history class is the audience. “We don’t learn our lessons; we live our lessons,” says Teacher Stuart.

Director Taibi Magar and her designers, Tilly Grimes (production design), Steven Dufala (scenic design), Oona Curley (lighting design), and Mikaal Sulaiman (sound design) ably walk a tightrope in illustrating how the characters “live their lessons.” Each of the designers is exceptional and compliment each other and the play in balancing satire, irony and comedic bedlam concerning race and romance.

Kidwell and Sheppard state in their play that the Underground Railroad “was the silver lining to the dark cloud that was slavery” — an ironic commentary on a heinous time in American history. But, one may argue that the racial divide seen then is still very much present today.