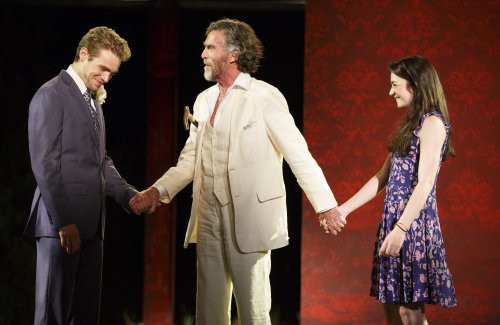 This summer The Public Theater has chosen to stage two of Shakespeare’s “problem plays”: The Taming of the Shrew which to modern sensibilities seems sexist, and Troilus and Cressida, a dark comedy on historical themes, and possibly Shakespeare’s only tragicomedy. The problem of the Shrew was solved by performing it with an all-female cast. Now director Daniel Sullivan has tackled the thorny Troilus and Cressida drawn from Homer and Chaucer and set in the seventh year of the Trojan War by updating it to the present when we have been fighting in the Middle East for 15 years. Performed this way by a large and fine cast of mostly male actors, the play has found its relevance once more. Though a leisurely rendition, the final battle scenes are both violent and exciting.

Although the title suggests a love story on the lines of Romeo and Juliet or Anthony and Cleopatra, the title characters get the least playing time of the three strands of the plot, and their story is an ironic allegory of love thwarted. The play mainly alternates between the Trojans holed up in King Priam’s palace trying to decide if they should give back the Greek Queen Helen, and the Greeks in the their camp just outside the city walls as they try to get their greatest warrior Achilles to take up his weapons and return to fighting. The theme appears to be love, honor and betrayal and the sardonic message is that all is fair in love and war. Troilus and Cressida is Shakespeare’s most cynical play and the ending leaves a sour taste. However, it fits with the mood of the moment and Sullivan’s production appears to have surmounted the usual problems. 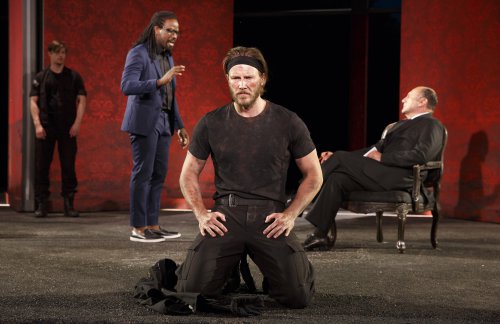 The updating has been carefully worked out to include a lap top, smart phones, boom boxes, selfies, weights and gym equipment, etc. David Zinn’s costumes put the Trojan soldiers in black uniforms, and the Greeks in beige and brown camouflage, as well as olive drab uniforms for formal encounters, suits and ties for conferences, and blue jeans and sneakers for more casual scenes. His utilitarian set which allows for quick scene changes is made up of panels that have distressed red wallpapered walls for Priam’s palace which when swiveled show metal corrugated walls for the Greeks’ barracks. It all works as though the play were intended to be set now.

The play opens with Cressida’s uncle, the pimp Pandarus (a cunning and sly John Glover) speaking into a tape recorder as he brings us up to date in the story. Each time we see him bringing Troilus and Cressida together he seem more ill leading us to suspect syphilis. Andrew Burnap is an impassioned, naive Prince Troilus, King Priam’s youngest son, while Ismenia Mendes’ Cressida is a sassy, feisty young woman. Now a byword for infidelity, her behavior when she is returned to her father Calchas in the Greek camp and finds herself the only woman seems shrewd and insightful in choosing a new lover and protector in Diomedes (a handsome Zach Appelman). 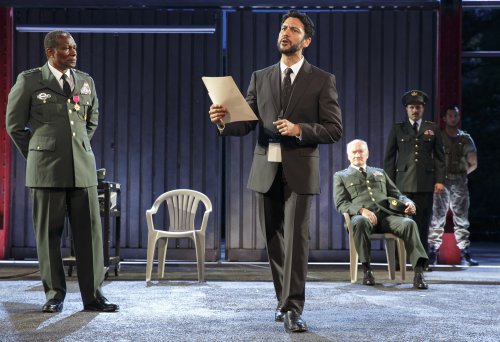 The large cast of actors playing soldiers have made their roles their own, keeping the many characters differentiated. Among the Greeks, John Douglas Thompson is a hearty Agamemnon, while Edward James Hyland as the elderly Nestor is a mellow, world-weary sage. Corey Stoll (House of Cards) is a shrewd, business-like Ulysses, usually dressed in suits as a consultant/advisor. Louis Cancelmi (replacing the injured David Harbour) is a pugnacious, virile Achilles, while his friend and lover Patroclus is played by Tom Pecinka as a carousing, sarcastic layabout. Late of Red Speedo, Alex Breaux is a hilariously thickheaded and doltish Ajax, the brawny Greek with the low I.Q. Max Casella steals every one of his few scenes as the foul-mouthed Thersites spewing invective wherever he goes, here played as the janitor.

The Trojans are equally well defined. Bill Heck is a stalwart and upright Hector, a warrior you would want to have on your side. Following up his breakthrough role in Dry Powder this spring, Sanjit De Silva is a politic and adroit Aeneas, used as an ambassador to the Greeks. Miguel Perez in a double role is sagacious as Priam, sour as Calchas. Tala Ashe is both a seductive and commanding Helen as well as the imploring, emotional Andromache. Surprisingly, the play gives Maurice Jones’ Paris (who started the Trojan War by kidnapping Helen) little to do. The vigorous and realistic fight choreography is credited to both Michael Rossmy and Rick Sordelet.

While Troilus and Cressida is rarely staged, Daniel Sullivan’s production full of bombs and smoke suggests that in our time of endless wars it speaks to us again, and the play’s cynicism also seems to capture the current zeitgeist. It also features memorable performances from John Glover, John Douglas Thompson, Max Casella, Sanjit de Silva, and Alex Breaux, among others.

Shakespeare in the Park

Free tickets distributed at Noon at the Delacorte Box Office to those on prior line or by lottery at http://www.publictheater.org