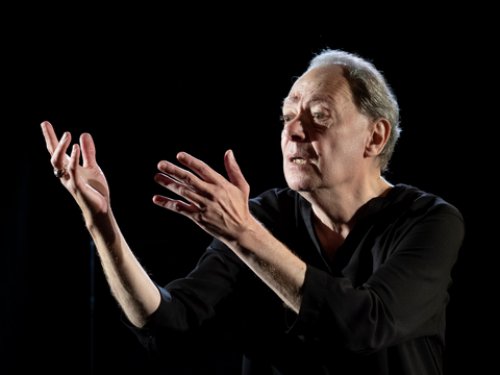 Victor, written and performed by Edgar Oliver, is a haunting love story memoir that will stay with you days after the performance. Edgar takes you on a journey back to his 20 year relationship with Victor Greco. Using his hands to gesture you through the story along with his deep and soft voice, the 70 minute performance, with no intermission, is a moving tribute to his friend.

They first met when Victor was 28 and Edgar 39. They were neighbors and would share a stoop, a bottle of vodka and sometimes a dance. It’s the only time Edgar felt courted. Although Victor is a strong, virile straight man, he seems to woo his gay neighbor and then good friend. The relationship between these two men continues for two decades and Victor’s eventual homelessness.

The play captures emotions that many of us have felt, from unrequited love, to loss. Seldom are we allowed access to such a raw story and candidness. In a time where we shield each other from truths, this stark and unapologetic performance allows us to feel what Victor meant to Edgar. 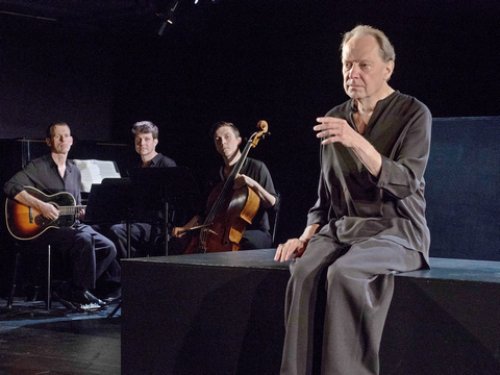 Accomplished music director, composer, sound designer and guitarist Paul Carbonara provides the soft music that takes the viewer by the hand and gently guides us. The music is almost a secondary character in the show. The tempo and timing is spot on. Samuel Quiggins, on cello, not only does double duty playing with the trio on stage, but also adds clever special effect sounds a few times throughout our journey. Yonatan Gutfeld, on piano, completes the trio with his perfectly played notes.

Set designer Chad Yarborough uses the stark, dark, simple yet effective stage to set the tone and provides a perfect backdrop to this captivating story.

Karl Ruckdeschel’s costume design adds to the deep and sometimes ghostly feel of the storytelling. It is well-suited for the subtle lighting that adds to the earnestness of Oliver’s storytelling which lighting designer David Zeffren has delicately accomplished.

James Navarrete has over 20 years experience working with entertainment magazines. He is originally from Los Angeles and moved to NYC 20 years ago. He has worked with titles including Detour Magazine, Movieline, Artinfo.com, Bullett Media, Luxury Magazine and Out. He is currently also a contributing writer at TheGLife.com
Contact: Website