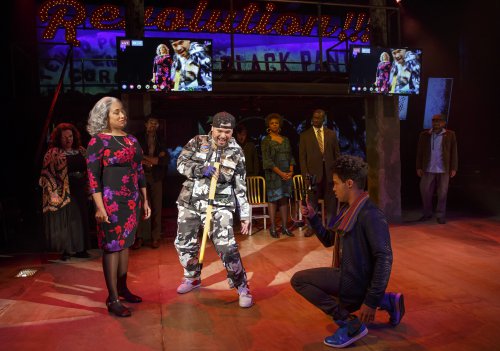 In the time of the Black Lives Matter movement, Party People at the Public Theater is a timely and exciting theatrical show. Originally created by Universes (Steven Sapp, Mildred Ruiz-Sapp, and William Ruiz a.k.a Ninja) for the Oregon Shakespeare Festival as part of the American Revolutions: US History Cycle, the play fuses theater, video, poetry, dance, gospel, jazz, rock, hip hop, down home blues and Spanish boleros to create an event of total theater that is part tribute, part history, part drama and part musical. At two hours and 40 minutes, it is a bit too long, but Liesl Tommy’s production is also startling and engrossing. Just when you think you know what genre Party People is, it shifts to something unexpected.

The relevance of the tribute is undeniable: The Black Panther’s original mission included policing the police and free daily breakfasts for school age children. The Young Lords sponsored sit-ins and social programming for Puerto Ricans. Whatever these groups evolved into (and Party People also deals with the in-fighting, the betrayals, and the violence,) their goals are still viable and being fought today.

The framework is a fictional fiftieth anniversary party given in a New York art gallery by collaborating media/visual/performing artists Malik “Mk Ultra” (Christopher Livingston) and Jimmy “Primo” (William Ruiz a.k.a. Ninja) to commemorate the creation of both the Black Panther Party and the Young Lords. Their interest is familial: Jimmy is the nephew of Tito (Jesse J. Perez), a former Young Lords Party member still involved with union organizing, and Primo is a “Panther Cub” as he is the son of a Panther member now in prison. They want to pay homage as well as reveal unspoken truths. Malik and Primo have created a video of the many former party members that they have interviewed that they plan on debuting at the event. The party with people who have not spoken for years will be a charged reunion. The troubled legacy of the two organizations is thoroughly explored in the course of Party People. 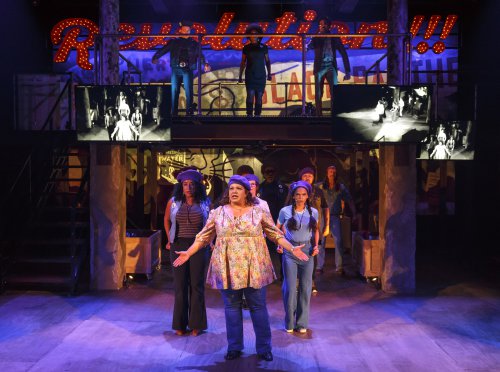 Alternating between dramatic scenes, video interviews, and songs (both solos and choral numbers created by Universes with Broken Chord,) Party People leads up to a series of confrontations at the art opening which investigate the troubled legacy of both organizations. It begins when Tito accuses his nephew Jimmy of not knowing his own history. Solias (Horace V. Rogers) has a flashback to when he was recruited by the FBI to spy on the Black Panthers. Omar (Steven Sapp) wants an apology for being tortured by Blue and Amira years before as a possible traitor to the movement. Clara (Gizel Jiménez)confronts her Aunt Helita (Mildred Ruiz–Sapp) as to the failure of the movement and the loss of both her parents to it. Maruca (Sophia Ramos) is accused of betraying the movement but claims she was betrayed by the man she loved.

Throughout the evening there are references to the fate of Huey Newton, Little Bobby Hutton, Bobby Seale and Fred Hampton, an innocent man gunned down by  the Chicago police instigated by the FBI. MK Ultra and Primo confront the party people over the men’s disintegration into drugs. Ultimately, in a thrilling moment Amira (Ramona Keller) turns on the cynical younger revolutionaries saying “Y’all need to be careful because there are a lot of folks from your generation that just make political statements by posting something on your Facebook page. Is that enough?” The work is cleverly and creatively staged all over the Anspacher Theater and on Marcus Doshi’s two level unit set which is used to stand in for several past and present locales. Fourteen monitors hung at different angles display Sven Ortel’s projection design for Malik’s video interviews. Rick Sordelet and Christian Kelly-Sordelet are responsible for the subtle and startling fight choreography. 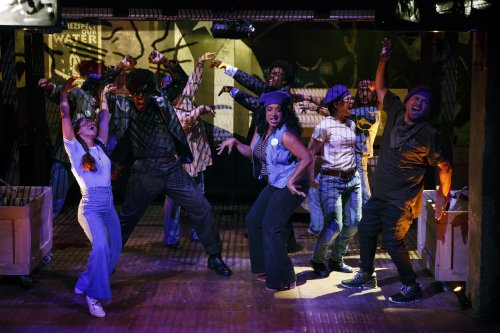 Director and developer Tommy uses the cast to play individual roles as well as members of the ensemble. The songs mostly led by William Ruiz a.k.a. Ninja, Mildred Ruiz-Sapp and Jiménez are each in a different style and are staged differently, with choreography by Millicent Johnnie. The 12 member cast seems much larger as they play 14 roles and all take part in the ensemble. While all make a strong impression, several stand out more than the others as their roles are more well-defined. Ruiz a.k.a. Ninja plays the conflicted Jimmy who hides behind Primo the Clown in his performance art. Ruiz-Sapp is Helita, a former Young Lords Party member, now a journalist and young organizer, who has not yet come to terms with the way things turned out.

Oberon K.A. Adjepong is Blue, still angry about the 25 years he spent in prison for a murder he did not commit. Ramos is the proud Maruca, the only one to know the truth about her mistakes though mistrusted by the others. Robynn Rodriguez is Donna, the furious widow of a murdered policeman, who has come to confront her husband’s killer.

At times, Party People is confusing as it tends to blur time and place so that it is not always clear what is happening in the present and what happened in the past. The show also has several false endings before the real one which is hauntingly moving. Party People which is definitely too long and could use a bit of tweaking is nevertheless a powerful, inventive investigation into a history and an era which has almost been forgotten in a time when many of the same issues are still being fought.