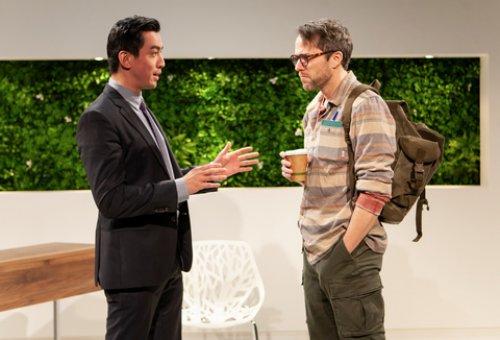 Johnny Wu and Christian Conn in a scene from Jordan Jaffee’s “Whirlwind” at The Wild Project (Photo credit: Monique Carboni)

Whirlwind, one of three “energy” plays by Jordan Jaffee, is an “eco-comedy” that sets a large wind energy company against an opposing lone bird advocate.

Representing Arrow Energy, boorish boss Cooper (Johnny Wu) charges bubbly and quirky subordinate Beth (Annapurna Sriram) with meeting a rebellious and introverted Michael (Christian Conn), the likely lone representative of The National Bird Defense League, to address his concerns that the company’s wind turbines are killing birds. Throughout the course of the play, Beth manages to stave off the advances of both men, although her resolve is broken when she softens to Michael’s concerns over avian mortality at the hand of the wind machines. The story reaches its climax when Michael kidnaps Cooper and attempts to blow up one of the company’s turbines in an act of defiance.

Clearly, Jaffee has done his research; anyone not familiar with the real-life conflict between these two opposing sides stands well informed of it by the play’s end.

One expects a certain level of implausibility from a satirical comedy; however, Michael’s kidnapping of Cooper seems pointless unless Michael has planned to kill Cooper in the explosion (the idea is vaguely suggested but without this single-minded goal the kidnapping doesn’t make sense). Also, Beth’s threat to Cooper to expose the “bro culture” at Arrow Energy in exchange for his silence seems contrived. (There are some early setups in the script but they aren’t strong enough to back up the challenge.) 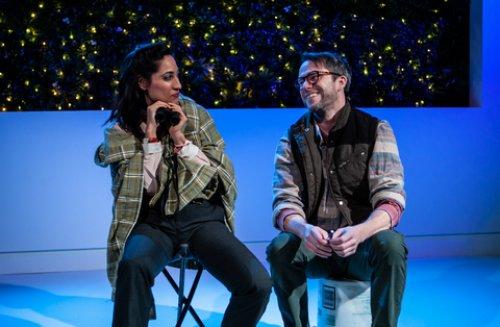 Annapurna Sriram and Christian Conn in a scene from Jordan Jaffee’s “Whirlwind” at The Wild Project (Photo credit: Monique Carboni)

These two mild points aside, Jaffee’s script is nevertheless hugely successful in conveying this man-vs-nature clash; his use of clever dialogue and idiosyncratic characters keep the topic in the forefront with much humor and without any preachy heavy-handedness.

Beth represents the audience in this tale; she listens and absorbs Michael and Cooper’s opposing voices and tries to reconcile an argument that cannot be won. Sriram’s performance in this three-dimensional, headstrong and compassionate role is a delight. Conn’s portrayal of the nerdy bird defender is persuasively charming. Wu succeeds despite his myopic, less-faceted character. All three actors’ expressiveness and superb comic timing, along with Dan Amboyer’s excellent direction, bring this thought-provoking script to life.

The set design by Gabriel Firestone and lighting by David Sexton work expertly in tandem to simply and effectively denote location and time of day. The costume design by Loren Shaw perfectly suits the characters and adds to their definition.