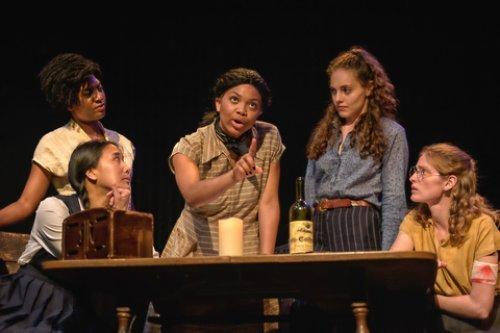 Megan Monaghan Rivas’ gender-bending take on the popular, much-adapted Alexandre Dumas 1844 novel, The Three Musketeers, moves the action from the 17th century to Paris during World War II. A very dedicated group of brave women take part in the Underground fighting behind enemy lines to sabotage the Nazis who were occupying most of France.

Written for the Women in Theatre Festival (WIT) and staged at the beautiful A.R.T./New York Theatres on the far West Side, an area which is filling up with fresh new theatrical venues, Three Musketeers: 1941 is a brave expression of the power of women.

The characters, mostly women, share names with the novel’s personalities.  The subterranean patriots include D’Artagnan (Essence Stiggers, intriguing in her transformation from farm girl to freedom fighter); Athos (Ella Dershowitz, who skillfully finds ways to channel the character’s anger); Porthos (Kate Margalite, whose revelation of inner strength and intelligence is wonderful to see at such a close proximity); Aramis, the Communist and anxious mother (Ashley Bufkin who does righteous anger beautifully); courier Planchet (Christina Liang, a bundle of childish nerves, slightly overplaying the nervous youngster); and their leader, Treville (Joleen Wilkinson, perfectly cast for her steely exterior camouflaging deep emotions).

The villains:  Englishwoman and Nazi sympathizer, Milady (Helen Farmer, elegantly poisonous down to the tips of her manicured fingertips); French police lieutenant Rochefort (Javan Nelson who effectively underplays his role as sadistic enforcer); and Richelieu, a French police inspector with dreams of replacing Petain as ruler of Nazi-occupied France after the German victory.  Zack Calhoon is a bit hazy as Richelieu even when expounding on his egocentric pipe dreams.  (Perhaps he should explore his inner Conrad Veidt or Claude Rains?) 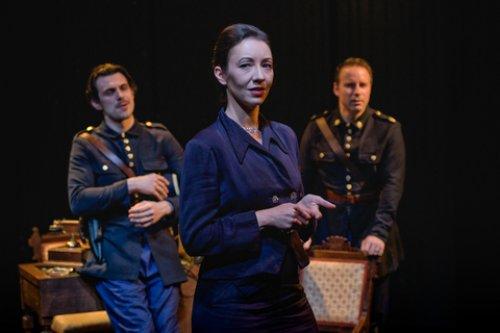 The women receive coded messages via radio broadcasts, use secret knocks to gain entrance and run missions with intensity and zeal until they meet their match in Milady.  Their first mission is to free an Englishman from imprisonment so that he can give a first-hand report to Churchill and de Gaulle in England about the direness of their situation.

Three Musketeers: 1941 reveals the nitty gritty details of the suffering of the people of France, particularly the Jews and the left wingers.  Only the collaborators like Richelieu, Rochefort and Milady live relatively pleasant lives.

The two intrigues that speed the plot along are the freeing of the Englishman and an attempt to prevent the Jewish prisoners from being deported from their imprisonment in the Velodrome.

Watching the clever heroines combine their different talents and personalities is what drives the play even if some intramural conflicts occasionally arise. These actresses are believable in their earnestness and zeal. 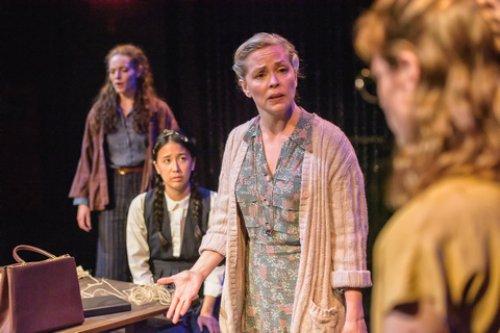 The up close and personal staging by Michole Biancosino and Andrew William Smith makes the violence and intrigue come alive just inches from the audience members.  Carlotta Summers’ fine fight choreography is almost too realistic.

She is helped by the exactingly dramatic lighting by Hallie Zieselman who cleverly approximates film noir’s foreboding shadow and light.  Adding to the period ambiance were Olivia Hern’s costumes which range from worn-out dresses to spiffy police uniforms and Milady’s elegant couture.  The sound designer, Yiran Zhang’s spooky street sounds add needed tension to their endeavors.