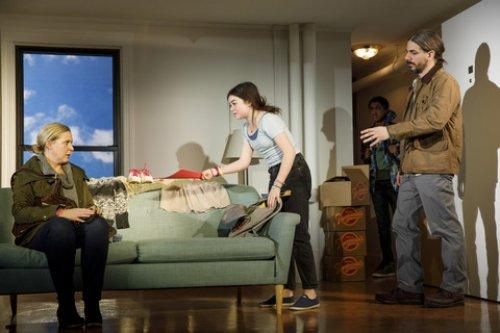 To a large degree, the tragedy of Lindsey Ferrentino’s topical This Flat Earth is the gnawing doubt that its topicality will ever fade. That’s because her new work is about the immediate aftermath of a school shooting, a one-time unimaginable horror that has become a depressingly regular feature of modern American life. Ferrentino is no stranger to fraught issue-driven stories. Her Ugly Lies the Bone dealt with a disfigured female Afghan veteran’s battle against PTSD, while the central character of the currently running Amy and the Orphans is a neglected child with Down Syndrome. To the young playwright’s credit, she is obviously committed to expanding our understanding of suffering in all its human forms.

Near the beginning of This Flat Earth, two middle schoolers, Julie (Ella Kennedy Davis) and Zander (Ian Saint-Germain), are hanging out in Julie’s room watching a scary movie on her laptop and sharing a conversation that reveals both the budding hormonal complications in their relationship and the hazy details of their recent  public trauma, which claimed the lives of several of their classmates. It’s a compelling piece of empathetic writing, as Ferrentino contends with what an honest coming-of-age narrative has become.

Whatever Julie and Zander are working through emotionally, Ferrentino lets us know that, aside from a perfunctory memorial attended by the usual hand-wringing politicians, the kids are on their own. We never see Zander’s parents, while Julie’s widowed father, Dan (Lucas Papaelias), an aspiring comedian-turned-municipal-paper-pusher, is still joking his way through life. He’s not a bad guy; he just doesn’t have any of the answers that might comfort a little girl in desperate need of them. 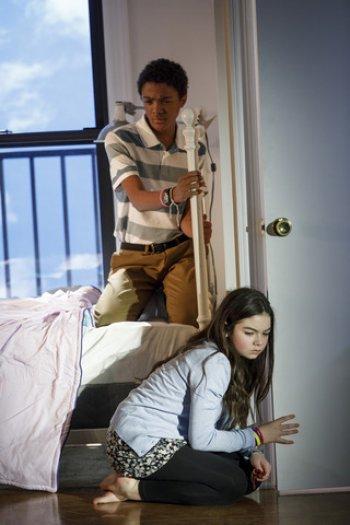 But, unfortunately, Ferrentino squanders this intriguing setup, getting lost in existential musings that end up being nowhere near as complicated as her subject matter. The first signs of trouble are actually percolating even before the play begins. As we enter the theater, Cloris (Lynda Gravátt), Julie and Dan’s elderly neighbor, is already perched in the upstairs apartment of Dane Laffrey’s two-story set. And there she remains for the entire play, a constant presence hovering over the action below. Initially, you wonder about her and, then, you feel sorry for the actor, hoping she’ll be given something more to do than just putter around. Eventually, however, after a couple of pat exchanges with Julie, it all becomes cringingly clear. Cloris isn’t a character at all; she’s an inspirational device, one that Ferrentino unleashes with full, and shameless, force at the play’s tear-jerking conclusion.

To be fair, at the performance I attended, there was a lot of sniffling and nose blowing, which, if nothing else, is evidence that Ferrentino knows how to push an audience’s emotional buttons (of course, with some issues, you don’t have to push very hard). That’s impressive, I guess. Though, in this production, Ferrentino also benefits from Davis’ thoroughly committed performance, which is indispensable in getting all of those tears that the playwright so badly wants.

But just in case there are still a few dry eyes holding out, there’s an actual cellist (Christine H. Kim) performing the Bach music that Cloris, a former cellist herself, is supposedly listening to on her old record player. It seems like an expensive choice for an off-Broadway production, since they could have just used a record. Maybe that’s why the white walls of both apartments are blank. The set designer ran out of money to decorate them.

Director Rebecca Taichman, who won a Tony last year for helming Indecent, is unable to add any depth to the proceedings or smooth over the script’s awkward plotting and strange inconsistencies. The most grating example of the latter is when Julie, who is 13-years-old, says she was unaware of any school shootings before the one she experienced. This type of sheltered innocence might fit Ferrentino’s larger objectives, but it’s completely at odds with the smart young person we’ve come to know.

More problematically, Ferrentino uses another character, Lisa (Cassie Beck), a grieving mother whose daughter, Noelle, died in the shooting, to shoehorn in some underdeveloped ideas about class conflict in small town America. For no particular reason, the well-heeled Lisa enlists the paycheck-dependent Dan, a casual acquaintance at best, to deliver popcorn tins Noelle sold as part of a school orchestra fundraiser. It would be a touching gesture on Dan’s part, if not for the fact that Julie was Noelle’s bandmate and, you know, having a bunch of boxes stacked up in your apartment with a dead girl’s name on them probably isn’t going to help your emotionally scarred daughter to heal.

Layering contrivance upon contrivance, Ferrentino then has Lisa do something so incredibly rotten to Julie and Dan that it lacks the faintest whiff of believability, despite Ferrentino’s strained effort to provide some. But, by this point, it doesn’t matter anyway, because we already know that This Flat Earth is not the play we thought it was going to be.