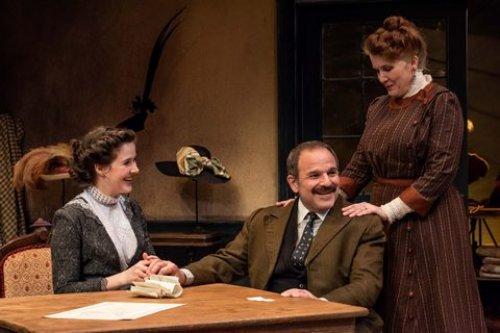 Emma Geer, Donald Corren and Tracy Sallows in a scene from “The Price of Thomas Scott” at the Mint Theater Company (Photo credit: Todd Cerveris)

What would you do if you were offered a great deal of money for something that went against your religious scruples even if your family and most of society disagreed with you? In Elizabeth Baker’s 1913 The Price of Thomas Scott, this the dilemma facing its nonconformist chapelgoer named in the title. His drapery business (selling textiles and ready-made clothing) in West London is failing with all the recent fancier competition and he has not been able to sell it though he has listed it with agents three times. Along comes an old friend who used to be a draper and offers him £500 for his premises, a fortune in those days equivalent to $56,000 today. Fine for Wicksteed to expand the drapery business.

This would be a godsend as his wife wants to retire to Tunbridge Wells, his daugher Annie, an accomplished hat maker wishes to go to Paris to study the latest fashion, and young Leonard, an avid scholar, yearns to be able to apply to the best school in the district whose fees are prohibitive. And if Scott waits too long the value of his business will only decline. However, he discovers that Wicksteed wants to buy the property for the Courtney Company which is a chain of high class dance halls. Here is the rub: Scott is against dancing on religious grounds of it being sinful. But if he sells it to Wicksteed, is he responsible for what the Courtney Company does with it? In addition, Scott is against beer drinking and although the Courtneys do not sell it, young men bring it in from the outside.

As is usual with Mint Theater Company (which will be presenting two more American premieres of Baker’s work over the next two years as part of its “Meet Miss Baker” project) it has given the play an exquisite production staged by artistic director Jonathan Bank and brilliantly cast by famed Stephanie Klapper. As directed by Bank, the production creates an entire community from 1913 with friends, neighbors, customers and fellow churchgoers believely enacted by its cast of 11.

The production team has also done an excellent job. Vicki R. Davis’ set for the back parlor is completely realistic down to the last detail. The costumes by Hunter Kaczorowski are attractive both for the men and women in this Edwardian era when men wore contrastingly patterned vests as part of their three piece suits. Jane Shaw’s musical arrangement of period appropriate palm court music is quite lovely. Tracy Bersley is responsible for the choreography from the exuberant young people when their elders are not in sight. 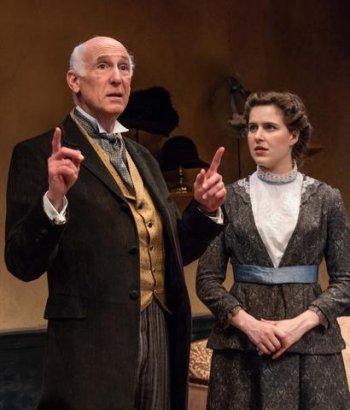 Mitch Greenberg and Emma Geer in a scene from Elizabeth Baker’s “The Price of Thomas Scott” at the Mint Theater Company (Photo credit: Todd Cerveris)

However, the play may not be to the taste of regular Mint theatergoers as it seems much more dated that the usual lost masterpieces rediscovered at this esteemed venue. Thomas Scott is so rigid in his thinking that he is against not only dancing beer, and theater, but also the Literary Society which has put on Twelfth Night, a Shakespeare comedy in which the young lady playing Viola had to wear pants. In general except for singing hymns, Scott is against all pleasures. A great many of his neighbors no longer take exception to these activities and his own family could desperately use the money they are being offered to better themselves.

One might admire Scott for sticking to his conscience, but these are issues no longer seen as immoral. When is a man completely out of step with his own time and standing in the way of progress? If the Courtneys do not buy his shop they will buy another one down the road, so that he is not keeping them out of the community. It will also make it more difficult for him to sell in the future. It is difficult for a modern audience to side with or care about Thomas Scott, considering when one sees the harm it will do his worried wife and the careers of his children.

Although the three-act play is presented with no intermission at one hour and 40 minutes it seems long as it is simply a waiting game: will Thomas Scott sell or not? This is really not enough plot or action to sustain the play for this length although it is very well-written. His wife and children are so under his thumb that they do not raise any of their own objections, although this is not entirely surprising for its 1913 setting. However, as the setting is London it is difficult to credit such views in the metropolis. Given Scott’s convictions the ending is to be expected which leaves the viewer with few surprises. And as no one changes in the course of the two days, there is not much growth or catharsis. We are asked to admire Scott because he worries about the price of his soul but the dilemma seems rather a loaded case. Even his children are surprised when he takes the £ 25 down payment knowing their father as they do. 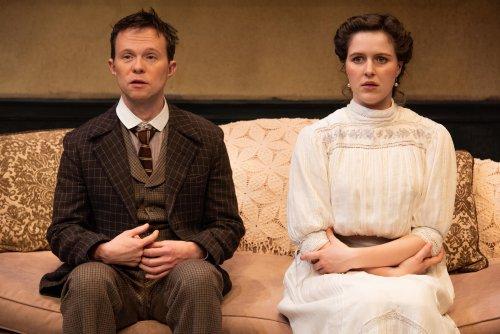 Andrew Fallaize and Emma Geer in a scene from “The Price of Thomas Scott” at the Mint Theater Company (Photo credit: Todd Cerveris)

The accomplished cast makes much more of their roles than might be expected from the thinness of the story line. In what was considered the central role in its own time, Emma Geer is delightful as the high-spirited daughter Annie who although she has dreams of her own will not go against her father’s views while she lives in his house. In the title role Donald Corren gives the strict churchman all of the nuance of a fine British character actor. Mitch Greenberg is vivacious and animated as former neighbor Wicksteed, now an agent for the Courtney Company and a spokesman for changing with the times. Although we don’t see much of Scott’s wife Ellen, Tracy Sallows makes her feelings known but silently.

Mark Kenneth Smaltz as George Rufford and Jay Russell as Tewesbury give us the range of Scott’s neighbor and fellow churchmen. As Annie’s best friend May who has grown up in a somewhat less restrictive environment, Ayana Workman is quite charming. Andrew Fallaize makes the Scott’s boarder, the awkward Johnny Tite who is sweet on Annie, a very sympathetic character, while Josh Goulding as his friend Hartley Peters is quite dapper in a forward sort of way. Arielle Yoder is excellent as the vain Lucy Griffin, one of Annie’s regular customers.

While Elizabeth Baker’s The Price of Thomas Scott is beautifully written and terrifically acted in the Mint Theater Company production, the play’s theme seems to be of another age and another time. Dancing, theater and beer drinking has not been thought of as sinful for many decades. It is not difficult to agree that one should follow one’s conscience but the hero of this play would probably be against radios, televisions, smart phones and computers today, and how many of us will agree with that? Today we would simply dismiss him as a Luddite.