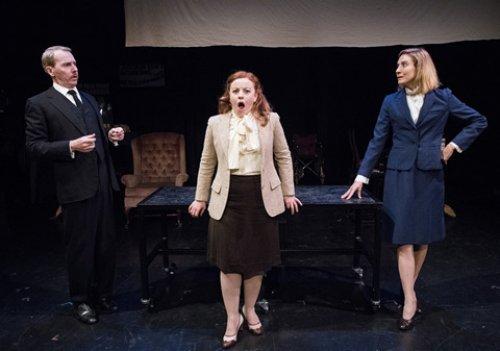 PTP/NYC (Potomac Theatre Project) has long championed the plays of British provocateurs Howard Barker and Caryl Churchill, by producing ten plays by Barker and four by Churchill. Now in its 32nd Season PTP is producing (in repertory with Brecht on Brecht) a double bill of rarely seen short plays by the two authors, Barker’s 1986 The Possibilities and Churchill’s 1978 The After-Dinner Joke. While the prductions by Richard Romagnoli and Cheryl Faraone, respectively, (PTC/NYC’s co-artistic directors) are excellently staged and very well acted, both plays are problematic in various ways. For the record, PTC staged the world premiere of “The After-Dinner Joke” in Washington, D.C., in 1993 and revived it again in 2002.

If The After-Dinner Joke’s 66 scenes seem cinematic, that is due to the fact that it originally was a teleplay commissioned by BBC for the series Plays for Today examining public issues. Churchill chose to deal with the politics of charitable institutions. Selby, personal secretary to the sales manager, decides that she gets no fulfillment from her work and tells her boss Mr. Price that she is resigning to be a do-gooder. Price offers her a job at the same salary working as a campaign organizer raising funds in towns throughout Britain for one of the charities that he has founded. 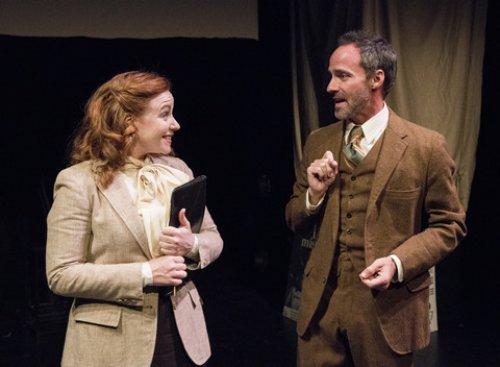 What follows is a kind of modern Candide-like journey in which Selby visits mayors of small towns, offers naïve ideas to the publicity department, and is kidnapped in a foreign country where she had gone to distribute money. Attempting to avoid anything political, she eventually discovers that everything is political even charity work. The world premiere stage version appeared in New York in the spring of 2001. The title comes from a reference to Pass the Port, a bestselling book by the British charity Oxfam which relates after dinner jokes by famous people.

Directed by PTC/NYC’s co-artistic director Cheryl Faraone, The After-Dinner Joke is now mild satire, unless it is an example of British understatement, and offers few chuckles. The many episodes are swiftly handled at 15 minutes less running time than the 2001 New York revival staged by Monster(less) Actors, Inc., which is a vast improvement. The production which uses 17 actors in 23 named roles and as countless extras in crowd scenes mixes live scenes with video of others which appear in Monty Python-fashion on screen. Hallie Zieselman’s scenic design helps immeasurably in bringing this episodic play to the small venue of the Atlantic Stage 2. Annie Ulrich appropriately costumes the many characters which total four dozen in the published script. 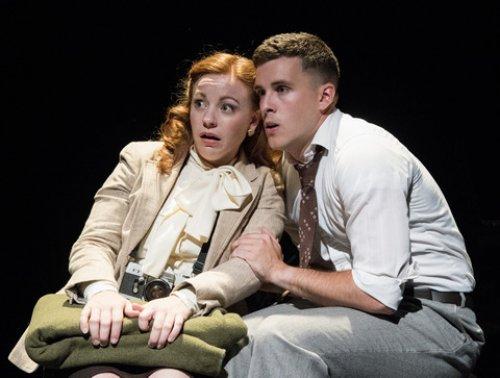 As Selby, Tara Giordano is an amiably naïve heroine, continually idealistic in her faith in man’s goodness, despite her experiences to the contrary that people are selfish and self-serving. Jonathan Tindle is amusing as the very stiff upper lip tycoon Mr. Price who has his own selfish agenda. In the role first played by Clive Merrison, Kathleen Wise is efficient and tart as Dent, the head of Price’s publicity department. Christopher Marshall as the Mayor of a small town in England can do little with a man whose only conversation is about his pet snakes in scenes that continually recur throughout the play.

Among memorable sequences are Christo Grabowski as both an egotistical Popstar and a Thief who wants to be a modern Robin Hood, Adam Milano as a paranoid Passenger seated next to Selby on a flight to an unnamed country seeing terrorists everywhere, and Lucy Van Atta as the Managing Director of a Tea Company defending the enormous profits of her firm. 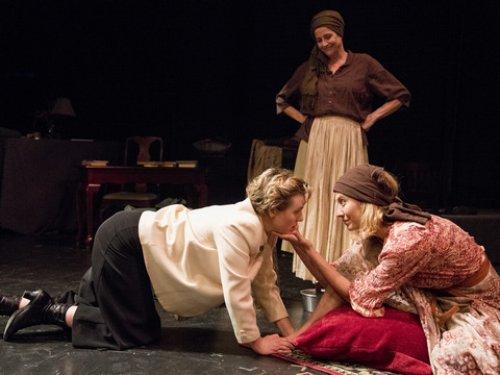 The curtain raiser is made up of four short plays from Barker’s ten-play sequence, The Possibilities. As no program notes are given as to the missing six plays, it is difficult to judge the overall theme of the work, and the effect is of something unfinished. The first two of the plays are on historical themes, while the second two are about life under totalitarian regimes. All four concern the abuse of power, what is possible but what one hopes will not happen.

“The Unforeseen Consequences of a Patriotic Act” is an early version of Barker’s later expanded Judith: A Parting from the Body (1992), performed by PTC/NYC in 2015 on a double bill with Churchill’s Vinegar Tom. Playing the Biblical Judith who slew Holofernes for the good of her country, Wise revels in the role of a liberated woman who lives the way she pleases, but will not be coerced by authority. “Reasons for the Fall of Emperors” tells an episode in the life of Russia’s Tsar Alexander. Tindle plays the tsar as a man who enjoys throwing his weight around. Marshall appears as the Peasant who will rue his accidental meeting with him. 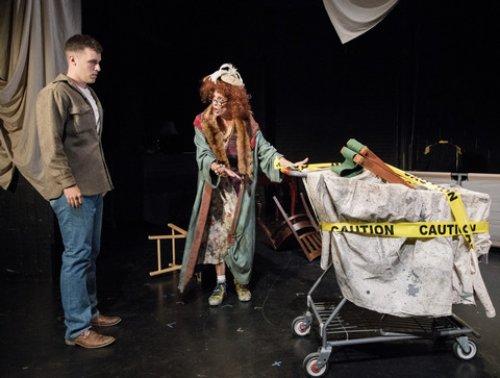 Adam Milano and Marianne Tatum in Howard Barker’s “Only Some Can Take the Strain,” part of PTP/NYC’s production of Barker’s The Possibilities (Photo credit: Stan Barouh)

The two modern stories resemble both Fahrenheit 451 and 1984, both much in the news these days. In Only Some Can Take the Strain, Marianne Tatum as an elderly Bookseller awaits the banning of her stock. In “She Sees the Argument But,” a free spirited woman (Madeleine Russell) is called in for a hearing by an Official (Wise) who wants an explanation of her short skirts, high heels and make-up in a society where such things can cost you dearly. Although co-artistic director Richard Romagnoli’s production is sharp and assured, the brief length of each play makes them more like blackout sketches than heavy-hitting dramatic experiences. As the complete script is difficult to obtain at this time, it is not known whether the missing six plays would have made this a more satisfying theatrical experience.

In The Possibilities, Zieselman’s stylized settings work well to deliver the locale for all four one acts, while Ulrich’s costumes are pitch perfect for the various stories. Joe Cabrera’s lighting for both the Barker as well as the Churchill play is suitable without being particularly memorable. Credit PTP/NYC with offering some unusual fare, as well as filling in the gaps in the careers of major playwrights Howard Barker and Caryl Churchill. However, both plays seem to be minor works from writers who later wrote some of our most powerful modern plays.

The Possibilities & The After-Dinner Joke (performed in repertory with Brecht on Brecht through August 5, 2018)