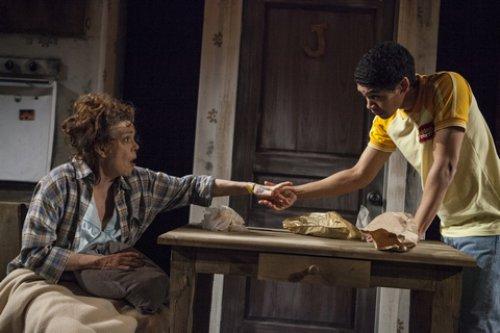 In a shotgun shack not quite in the middle of nowhere, Eller Freeman (Deirdre O’Connell) struggles to hold onto the present while slowly being crushed by the past. Apparently suffering from dementia,  Eller is informed by a hospital bracelet of vital details like her name, birth date, and to take her medications, while family photographs on the wall are affixed with reminders of who the people are and whether they’re living or dead. A nearby mirror also lets Eller know the identity of the still “alive and kicking” old white woman staring back at her in anxious wonder.

But what Eller can’t remember is less of a problem than all of the unwanted memories flooding back into her mind in the form of long-dead relatives (Clementine Belber, Jessie Dean, and Luke Leonard) and one just as deceased, former next-door neighbor (Shaun Patrick Tubbs). Their elliptical appearances suggest that Eller has a horrible secret which her fractured mind is resurrecting despite Eller’s desperate desire to keep it buried.

In the semi-autobiographical Terminus, part of a seven-play cycle set in the fictional town of Attapulgus, Georgia, playwright Gabriel Jason Dean unleashes this intriguing Southern Gothic setup which touches off a deeply felt personal story about racism in a place that is obviously more real to Dean than imagined. Unfortunately, as it goes along, Dean’s initially captivating ghost story exponentially loses steam, finally grinding to a halt well before Eller’s big, shameful secret is revealed at the play’s not-so-stunning conclusion. 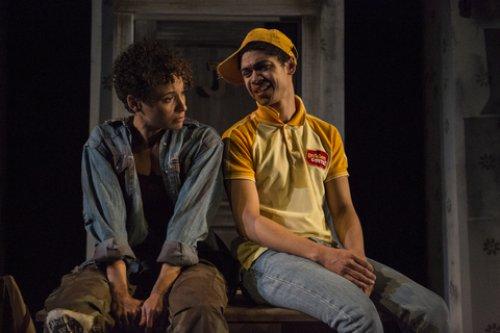 The problem is that Dean’s best dramaturgical efforts begin and end with Eller. The rest of his characters, especially those from the spiritual plane, are after-thoughts, at best. They exist to set the mood, provide information, or establish some sense of a narrative arc.

The latter is particularly true of Jaybo (Reynaldo Piniella), Eller’s 17-year old biracial grandson and hanger of captioned family photographs, who, abandoned by his no-account father (Mat Hostetler), doubles as his grandmother’s caretaker. He also works in a steakhouse, likes to smoke weed, and wants to lose his virginity, but, other than that, all we know about him is that he will be the most shocked by Eller’s secret. A game Piniella gives it his all, but Jaybo should have been so much more.

Dean seems to know this, too. A late kissy-kissy scene between Jaybo and a perfectly coiffed female hobo (Vanessa Butler), who breezes into town and sticks around for, well, it’s anyone’s guess, feels like a last-second attempt to flesh out Jaybo’s personality. Although it has its charms, the scene goes on far too long and, ultimately, belongs in a different play. 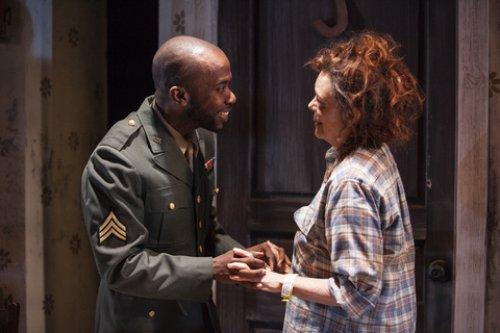 Paradoxically, the Obie and Drama Desk Award-winning O’Connell doesn’t help matters much, either, because, simply put, she’s too good. Hearing O’Connell perfectly deliver all of Dean’s best lines or marvelling as her face registers another one of Eller’s inner demons is just a stark reminder that you’re watching one great character in an underwritten play.

Director Lucie Tiberghien and her talented crew pull things together for several well-wrought theatrical moments, finding inventive ways to overcome the Next Door@NYTW’s elongated studio space, which puts an audience’s peripheral vision to the test. D’Vaughn Agu’s set–a row of tombstone-like wall sections–is particularly evocative, as well as functional, providing some wonderful hiding places for the play’s ghosts. Lighting designer S. “Stoli” Stolnack and sound designer Megan Culley also do a nice job of heightening the gloom and doom, while perpetually keeping us ill at ease.

But Tiberghien’s blocking eventually falls prey to the underbaked script as actors are forced to awkwardly stand around onstage with nothing to do but witness Eller’s final emotional breakdown. It’s a shame because Dean clearly has a lot to say about America’s original sin; he just doesn’t know, aside from Eller, how to convey it.

Next Door at NYTW, 83 East 4th Street, in Manhattan