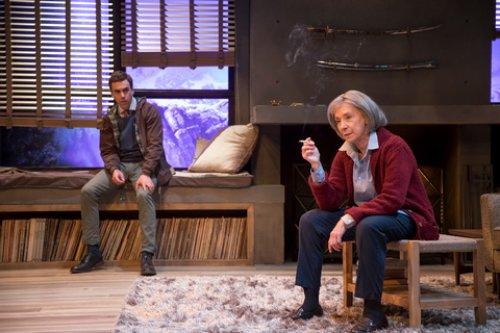 Mystery writer Patricia Highsmith (Strangers on a Train, Carol, The Talented Mr. Ripley) was famously alcoholic, depressive, misogynistic and racist. She was unique as an internationally famous writer who had created in Tom Ripley the only serial killer ever created by a woman writer. In Switzerland, Joanna Murray-Smith, one of Australia’s most successful playwrights, has written a play about the last days of this reclusive writer’s life. Directed by Dan Foster, the initially fascinating premise takes a sharp turn into territory that requires a good deal of suspension of disbelief.

Set in Switzerland in the fall of 1994 (where Highsmith had lived since 1982). Patricia has been having writer’s block when Edward Ridgeway, a young assistant at her American publisher, arrives. He is the second emissary to visit her from New York, the first, Bradley Applebee, has had a nervous breakdown after his visit to Patricia’s Switzerland hideaway where he claimed she had threatened him with a knife in the middle of the night, something she denies. Like Appleby, Edward has been sent to get Highsmith to sign a contract that she will dleivere a final Ripley novel to cap off the series. Not only does the publisher need a best seller but Highsmith’s prestige is no longer what it once was.

The encounter begins as a cat and mouse game, with Patricia not even inviting Edward to sit down. They discuss Edward’s lateness, the publishing company, the changes in New York which she had not visited for a while, current writers of high reputation who Highsmith despises, and Edward’s personal background. Patricia is unimpressed – but Edward his done his homework: he knows she is dying and that she is worried about her legacy. He also knows that she collects lethal weapons and he impresses her with his knowledge of them and others she does not own. He tells her how he admires her most famous protagonist, Tom Ripley “Terrifying. Enigmatic. Human, complex and a –.” “Killer.” She begins spinning a new Ripley tale out loud and dares him to continue it. If he comes up with some solutions to her plot, he can stay and she will sign the contract – otherwise he must leave. 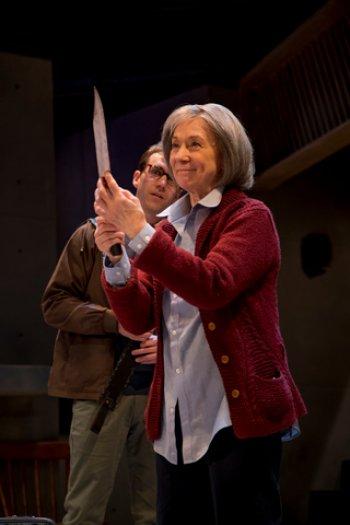 The play includes a great deal of talk about writing, what it means to a writer and how it is shaped. Edward guesses that Highsmith identifies with Ripley, that she would like to have been him. Edward tells her why readers have an affinity for someone as amoral as Ripley, “We want him to get away with it. You smash our moral compass.” Patricia counters from her experience:  “Writers are exceptional because we don’t care about your moral compass. We’re beyond your moral compass. Moral liberty is the artist’s compensation for impecunity, loneliness, and unlikability. It’s not my job to pass judgment – It’s my job to persuade. The reader takes sides. I sit there, right in the middle.” Highsmith warns him that nice writers are fakes. He attempts to butter her up quoting Graham Greene who had called her “The Poet of apprehension,” and wonders if Norman Mailer’s calling her a “high-class detective novelist” angers her.

The backbiting repartee goes on hitting below the belt discussing first his sexuality and then her racism and bigotry. This leads to some new ideas for her next Ripley novel. Then in the play’s third and last scene, something changes and the play enters uncharted territory that not all viewers will follow. Ultimately, Murray-Smith’s Switzerland becomes a Highsmith novel she never wrote.

Peggy J. Scott’s Patricia Highsmith is an interesting, quirky character, a brilliant mind with a great many unpleasant and despicable qualities. One understands why Highsmith is seen living alone. Her eventual softening towards Edward suggests how desperate she is for companionship. The problem is that as written and acted by Daniel Petzold, Edward Ridgeway is very bland. Although he is articulate, he could be one of a thousand other young men trying to make their way in the world but having few salient characteristics. The fact that he can talk with confidence about guns or that he knows a good deal about writers and writing, notwithstanding, he seems a little too ordinary for this role of bringing Highsmith out of her shell.

James J. Fenton’s living room/study set with a fantastic view of the Swiss Alps, a fireplace, a long low record cabinet and shelves displaying the weapons collection is quite attractive in a minimalistic, modern way. The costumes by Charlotte Palmer-Lane are suitable without making an impression themselves. Andrew Gmoser’s unobtrusive lighting gets under our skin without our realizing it. The sound design and original music by Garrett Hood including modern jazz and show tunes sets an eerie tone.

Joanna Murray-Smith’s Switzerland is engrossing in an intellectual way in its discussing of writing and writers. Its revelations about the life of author Patricia Highsmith may or may not be of interest to viewers who have never read her or only know her from the many film versions of her books. Peggy J. Scott and Daniel Petzold make an interesting pair of adversaries though the two roles are unequally well written. However, the drama’s third act shift into an entirely different play will be problematic for many audience members.