Stairway to Stardom, a new theater/dance collaboration between Amanda Szeglowski and cakeface (a creative group that insists on lower case) is an uneasy and ultimately self-defeating treatise on women, their professional aspirations and losses in a misogynistic world.

Disguised as a snazzy cabaret act, set against constantly projected images from a sleazy Eighties public access talent show—from which the show’s title is derived—the short, intense performance is delivered without a single intake of breath it seems, an energy level that makes it difficult to actually hear—rather than merely listen to—the women’s histories of how they were forced into jobs and professions they found irritating or shallow by pressures applied by loved ones and even themselves.

There is a serious disconnect between the relentless self-confessions—all spoken in a cool, measured manner to match the intricate, but mechanically repetitive movements—and the bizarrely distorted videos with their screen snow, slashing lines and poorly rendered soundtracks.

Attention is further distracted by the squeaky, hip-hop style music score and the fine lighting by Prism House (Brian Wenner + Matt O’Hara who stand facing each other on either side of the stage). It’s difficult to discern just how the sad videos jibe with the words spoken by the performers, written by Ms. Szeglowki, who, in the program notes, claims that her inspiration for Stairway to Stardom was, indeed, the wildly erratic TV series. 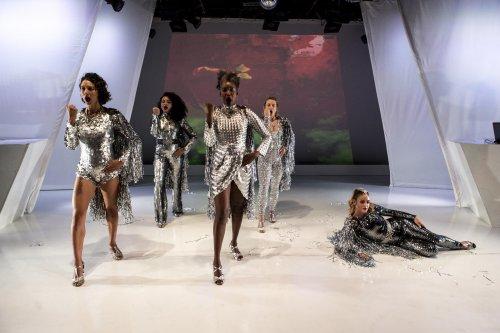 The five women of the cast—Ali Castro, Jade Daugherty, Ayesha Jordan, Nola Sporn Smith and Ms. Szeglowski—wear brilliant, showbizzy glittering outfits and shoes, all different and all designed by Oana Botez who has a command of kitschy elegance. They perform in an equally sparkling, all white set—by Aviva Novick—upon which the distorted videos of nervous, mostly untalented, but eager contestants on the old “Stairway to Stardom” are projected. This show was clearly the unofficial “Gong Show” of the Eighties.

The five women strut about, mostly in unison, striking sexy poses and performing movements that even the Rockettes would consider clichéd. While moving they singly or in unison recite histories in first person, all the while slinking into sexy poses or high stepping about.

The stories are so universally dreary that whatever wit and humor exists in the text is dissipated into the whiteness of the set.

Clearly Stairway to Stardom has been rehearsed to death with every little movement and every line performed adeptly. What it needs is more heart and an occasional respite from the relentless performing style.

Running time: 55 minutes with no intermission