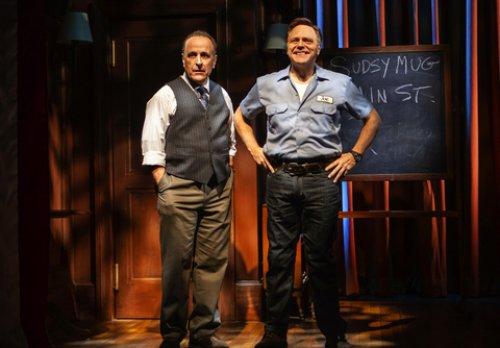 James Hindman’s Popcorn Falls is offered as comedy but it isn’t very funny. What it does have going for it is a tour de force for two actors who play 21 roles, often switching roles in the same scene. Making his New York directing debut, two-time Tony Award winner Christian Borle does fine work with actors Adam Heller and Tom Souhrada, but the story remains extremely thin and the play as light as a feather. However, the actors do get a workout playing both men, women and one child in the hard-luck town of Popcorn Falls.

The small American town of Popcorn Falls has fallen on hard times. A recently built dam has siphoned off their water and put an end to their namesake falls, their only tourist attraction. As a result the town has gone bankrupt. Enter Mr. Doyle, scheming and corrupt head of the Cattaraugus County Budget Planning Committee, who announces at a town meeting that in a few short months the boundaries will be drawn and the town will become part of Cattaraugus. The downtown will be torn down and turned into a sewage treatment plant which will offer jobs to all the able bodied residents. 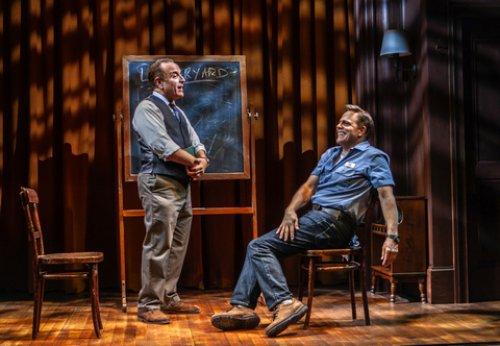 Intrepid new mayor Ted Trundle remembers that the town received a grant from the Cattaraugus County Arts Council for its theater, an amount large enough to save the town. The problem at the time was that Popcorn Falls has no theater. Trundle demands the check but Doyle will only give it to the town if they put on a play in seven days. As there is no theater and no play, Trundle has a problem which he plans to overcome with the help of the local colorful characters who like to be called Kernels.

Most of the townspeople are played by Souhrada. Among the local misfits he impersonates are Ms. Parker, the town librarian who collects cats, Floyd, the owner of the only lumber yard in town and a man who lost his arm in a freak accident with a telephone pole and a Mexican stripper, Mrs. Stepp, the chain-smoking middle-school teacher who is horny as well, and Austin, the not-very bright but eager-to-please sheriff of Popcorn Falls. While the production uses one set and one costume for each actor, the locations are printed in chalk on a blackboard and both actors enterprisingly make use of various items like a hat, an apron or a sweater in order to differentiate characters. 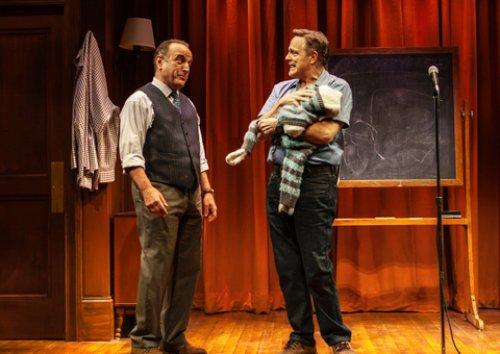 Beginning as Mayor Trundle and Joe, the nervous janitor whose wife is about to have their third set of twins, respectively, Heller and Souhrada demonstrate their versatility playing all of the roles, sometimes switching characters in the same scene or reversing roles in a later one. As Mayor Trundle, Heller is quite personable as a divorced man and recovering alcoholic who wants to save his town. Souhrada does most of the heavy lifting playing both men and women of all ages, with varying accents, as well as Lydia, the young daughter of Betty, a returning former resident once engaged to Joe, but now a single mother earning a living as a as a waitress in the Sudsy Mug.

However, the play’s humor is very mild. The jokes are on the level of “My steeple is drooping! I swear this never happened to me before,” from Pastor Peters, and “George Washington dined on that very land” – “Well, it was a picnic lunch.” Among the gags are that the cord for the mike in the Town Hall has been eaten through as they “can’t afford squirrel traps.” The play is farce but it is not played fast enough to keep all its bubbles in the air. Tim Mackabee’s set is very redolent of small town halls, but does not suggest the other locales. Jeff Croiter’s lighting attempts to add to the atmosphere as the play moves all over town. Heller and Souhrada remain in Joseph La Corte’s single costumes all evening, ones that are suitable for a major and a janitor. 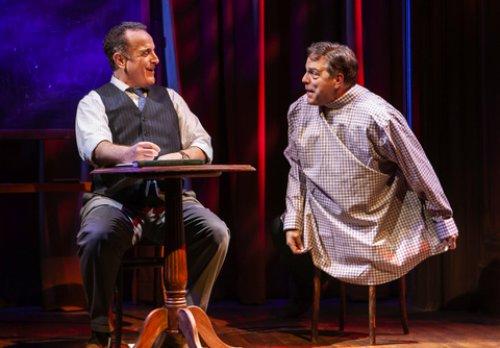 With Adam Heller and Tom Souhrada, Popcorn Falls works valiantly to create a multitude of characters in a very far-fetched story. Unfortunately this is not The Mystery of Irma Vep where the quick changes take your breath away. Mildly amusing, Popcorn Falls was not even serving popcorn in the lobby at the performance under review, which might have added to the ambiance.