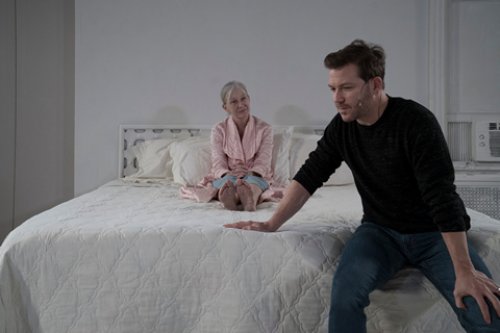 Caroline Lagerfelt and Ari Fliakos in a scene from Andy Bragen’s “Notes on My Mother’s Decline” (Photo credit: Julieta Cervantes)

Notes on My Mother’s Decline, written by Andy Bragen, is an autobiographical work that candidly explores a son’s complicated relationship with his mother as she becomes increasingly cloistered in her East 4th Street apartment bedroom as her health deteriorates.

Knud Adams directs this one-set show which at times has moments of humor, but overall is a slow-moving and usually depressing narrative. Ari Fliakos, who plays the son, gives a reserved performance. Too often I thought of  the somber tones of The Twilight Zone’s Rod Serling. Fliakos  speaks directly to the audience while seldom having conversations with his mother, played convincingly by Caroline Lagerfelt. When they do interact, it’s via a call that usually describes her mundane days.

He does care for her financially and will listen to her ramble about her friends and grocery list, as well as making sure her caregivers are not taking advantage of her.

The set designed by Marsha Ginsberg is mom’s room. It is primarily all-white and works best when dimmed and the headboard slide projector takes over the wall. Otherwise, it was too stark and cold. Sophia Choi’s costume for mom consists of two satin robes, one in pink the other in light blue. The subtle change towards the end of the show works as both mother and son finally seem to forge a more honest and heartfelt relationship. 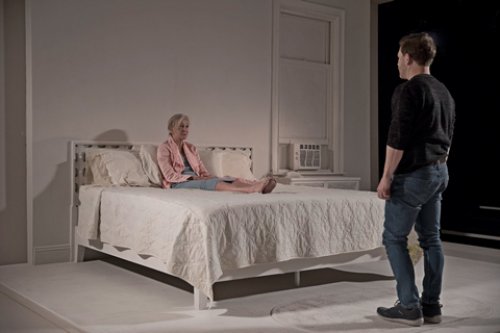 Caroline Lagerfelt and Ari Fliakos in a scene from Andy Bragen’s “Notes on My Mother’s Decline” (Photo credit: Julieta Cervantes)

Prior to this moment, Fliakos is miked and we hear him throughout the show describe her state using primarily single words, not phrases. It’s delivered in a soft yet monotone dialogue, which sound designer Peter Mills Weiss captures clearly.

Oona Curley’s lighting design I found too harsh at times. It may have been the all-white set, but the overhead lights practically shining on the audience is sometimes too much.

I think the 70 minute production, with no intermission, could have been much shorter and still have the message of loss come through.

James Navarrete has over 20 years experience working with entertainment magazines. He is originally from Los Angeles and moved to NYC 20 years ago. He has worked with titles including Detour Magazine, Movieline, Artinfo.com, Bullett Media, Luxury Magazine and Out. He is currently also a contributing writer at TheGLife.com
Contact: Website