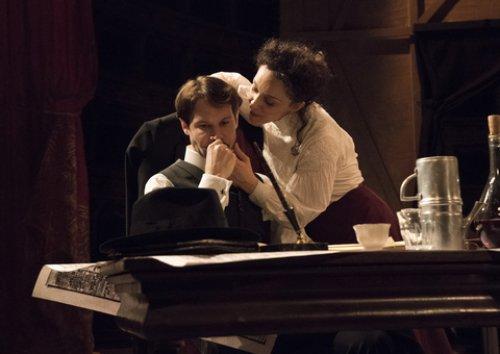 Don’t go to Brandon Cole’s Imperfect Love expecting to learn about the life and careers of actress Eleonora Duse and poet and playwright Gabriele D’Annunzio who had a passionate nine year affair at the turn of the last century. Although Cole’s program note indicates that he has done a great deal of research on these real people and Italian theater of their times, they come off as generic characters with few biographical details. Strangely, the play has had a previous New York production in 2000 in an earlier script and was also the source for John Turturro’s 1998 film, Illuminata, which changed the setting from Rome to New York.

Although subtitled a “serious comedy in two acts,” there is nothing at all funny about Imperfect Love. It instead resembles a bad soap opera, one we have seen before. And after all that research, it is curious that the author chose to give his characters fictional last names. Set in the Teatro Argentina in Rome, a magnificent stage, the play covers one day after a disastrous opening night. Gabriele Torrisi’s latest play for his lover Eleonora Della Rosa has been savaged by the critics and his company represented by male star Domenica, and clowns Marco and Beppo are trying to keep him from finding out the worst. Eleonora’s lines in the last scene need rewriting but the playwright has no idea how to solve the problem. Eleonora and Gabriele argue and bicker and not much gets accomplished.

Unfortunately off-stage theater owners Pallone and Asters want to shut down the play. In the first act all the characters argue about needed rewrites. In the second act which takes place on the same afternoon after a rehearsal, the same arguments occur, but also whether or not Eleonora will defect to perform in Ibsen’s A Doll’s House and whether Gabriele is offering his latest play to French star Sarah Bernhardt who is safely in Paris away from Eleonora’s jealousy if it is true. Although the play is dedicated to the memory of playwrights Luigi Pirandello and Samuel Beckett, there is nothing in Imperfect Love to suggest either author. 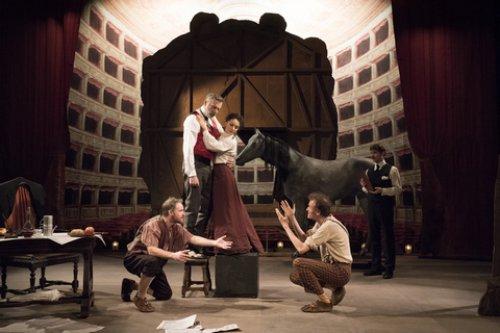 We are never told the name of the play being rehearsed or who the characters in the play within the play are. In the second act, the performers dressed in their costumes for Gabriele’s play reveal that it is a Renaissance costume drama but we still learn nothing about it. Nothing much is revealed about Italian theater of the time though the play being rehearsed does not seem to be in the naturalistic mode of drama that was creeping into the legitimate stage in 1899. And why did the author pick that year? No clues are given.

The arguments repeat endlessly: do Gabriele and Eleonora still love each other? Is their affair over? Is she leaving to appear in Ibsen? Is he having an affair with Bernhardt? Will Eleonora find out and what will she do if it is true? Has Gabriele lost his talent or are the critics prejudiced against him? Will Domenica, the leading man, leave for another theater company? Both acts are very similar in the squabbling of the characters.

Director Michael Di Jiacomo has not been much help as he has allowed his quintet of actors to use four separate styles. Cristina Spina as the tempestuous Eleonora is a diva out of Italian melodrama. Rodrigo Lopresti’s brooding Gabriele is from a mediocre production of Eugene O’Neill. Ed Malone and David O’Hara with Irish accents play clowns straight out of commedia dell’arte. Best is Aidan Redmond who brings authority to the role of Domenica, Eleonora’s leading man, but he is a character out of a comedy by Bernard Shaw, yet a fourth style. Di Jiacomo’s blocking has the actors distractingly crossing the stage even when there is not much going on. 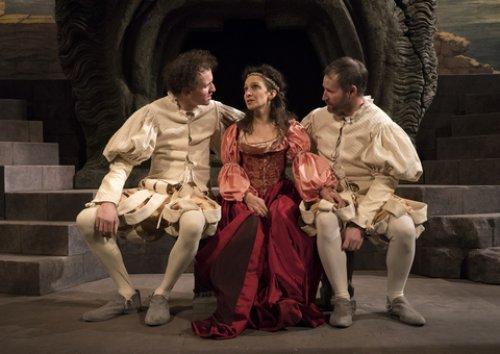 The sets and costumes are by Academy Award-winning designer Gianni Quaranta, closely associated with the lush films of his countryman Franco Zefferelli (Brother Sun, Sister Moon, Jesus of Nazereth, Cavalleria Rusticana, and Otello). While his sets are extremely attractive and impressive, they do not depict the scenes as described by the author or give the correct impressions. While in the first act, the stage is supposed to be set with “a palatial residence on the war infested northwest coast of Italy during the bloody reign of the Borgias at the end of the fifteenth century,” we are given a magnificent view of a huge European theater with the back of the stage scenery which we can’t see. A huge full-sized horse is brought on stage part of the way through the first act, but as it is never referred to it becomes a visual distraction. Instead of the second act’s ravished palace interior, we are given an outdoor architectural stone structure that resembles one used in ancient Greek theater. Both sets are remarkable but they give the wrong messages. His elegant costumes, however, are more period-appropriate.

While there is most likely a fascinating story in the stormy relationship between Eleonora Duse and Gabriele D’Annunzio during their nine year affair, Imperfect Love is not it. Not only do we not learn about the details of their lives and career, we do not learn about theater in 1899. Duse is now considered the greatest actress of her time but the play does not delve into that. It must have been a turbulent era in the theater when the romantic melodramas of the 19th century gave way to the neo-realism of the 20th century sensibility but you would never know it from Brandon Cole’s play.

The Left Wing Ltd. in association with John Turturro