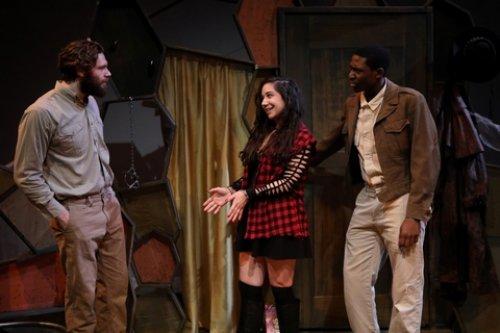 Viewing the abstract configuration onstage that could be from a Whitney Biennial before Friendly’s Fire begins instantly informs us we’ll be in a fantasyland. Indeed, playwright John Patrick Bray offers a surrealistic odyssey fusing together the dreams and battlefield memories of a disaffected Gulf War veteran with aspects of Hollywood Westerns and other pop culture genres. Mr. Bray’s writing is intense, often striving for absurdist comedy, and has a great sense of purpose. It’s all rather baffling, somewhat interesting and mildly entertaining.

“Inside Friendly’s Cabin in Alaska. It will change a bit as we enter Friendly’s head and take a journey to the North Pole, late 1990’s,”  is how Bray describes the set in his stage directors. These details are likely to fly by or remain vague during the play.

Jigsaw puzzle, bee hive-patterned and stained glass-tinted sections are on small platforms and get wheeled around. There’s a clothesline, a door on a frame, a steel bathtub and assorted oddities strewn about. Scenic designer Daniel Hogan’s impressive creation quite wonderfully achieves the desired effect of being inside of the hero’s mind. The back wall’s large screen periodically displays projection designer Taylor Stuart’s striking Outer Limits-style imagery. 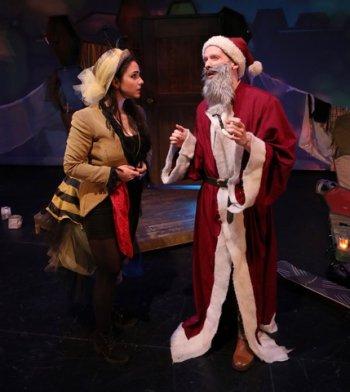 Guy Friendly and a young woman barge into a room and soon have sex. He’s noticed she’s wearing a necklace made of human teeth. These are totems from her conquests. In no time, she’s anesthetized him, produced pliers and pulled out one of his front teeth. Mr. Bray loopy picaresque journey begins in earnest.

Appearing now as if a character from Heaven’s Gate or The Long Riders, Guy wears a cowboy hat and a duster. A polar bear, Santa Claus on a skateboard, an astronaut, a poacher and a Queen Bee are among the wacky figures he encounters. The rambunctious stewpot of a plot is a mélange of early Sam Shepard and Kurt Vonnegut. Shards of Guy’s biographical data are discerned along the way including that he’s a beekeeper, divorced and his younger brother died in the Gulf War.

Clad mostly in long johns, the athletic and bearded Matthew Weitz is soulfully heroic as Guy. Mr. Weitz admirably succeeds in the task of having to carry much of the show as he is the central focus. The equally personable Adeyinka Adebola and Desiree Pinol are solidly supportive in their cohort roles. Kyle Porter, William Serri and Ita Korenzecher all vigorously portray the various oddball parts with charming individuality. 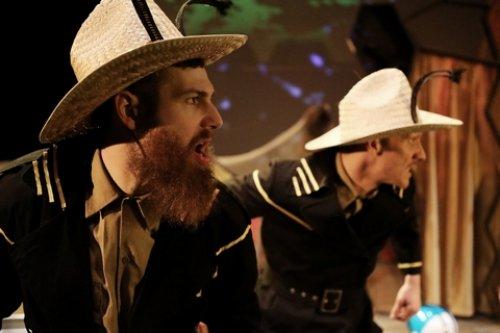 With tremendous flair, director Anna Hogan manages to harness enough stage wizardry to keep this all going for a focused one hour and 45 minutes while fulfilling Bray’s epic vision. Fight director Monica Blaze Leavitt and intimacy director Akia Squitieri both excel in their respective fields. The combat and sex sequences are all accomplished and realistic.

Lighting designer and technical director Zac Goin creates visual splendor with his bracing illuminations. Janet Bentley’s appealing modern musical score and the crashing effects are sharply rendered by her strong sound design. Relishing the challenge of depicting the eccentric cavalcade is costume designer Janet Marvin whose witty selections do that with pizazz.

Depending on one’s sensibility, Friendly’s Fire could either be a profound exploration of substantive themes or an enjoyably choppy avant-garde diversion.