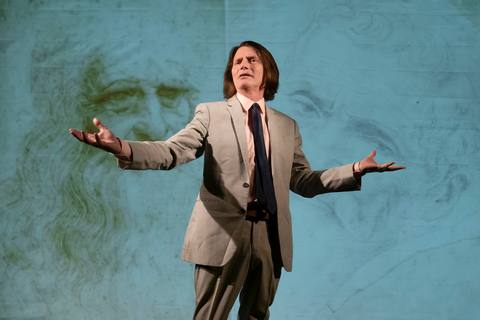 Described as a multimedia production, Da Vinci & Michelangelo: The Titans Experience is actually a lecture created and performed by art historian Mark Rodgers to slides of the masterpieces of these two geniuses. Both enlightening and dense, the performance by this animated and exuberant lecturer tells you a bit more than you can take in in one sitting. It is a little like two art classes back to back. However, one comes out of the show with an even higher respect for these two Renaissance men who were far ahead of their time and are still at the top of their professions after 500 years.

Based on “The Da Vinci Machines and Michelangelo Exhibition for North America” which is located in Denver, Colorado, curator Rodgers is a vivacious, enthusiastic advocate for these two remarkable stories. The projection design by Shari Debandt is made up of both photographs of the machines and art slides, as well as animation sequences which show the machines at work with modern parallels. Rodgers does have a tendency to punctuate many of his stories with the expression “How cool is that?” but he is the first one to laugh at this impulse. His enthusiasm is infectious making you want to rush out and experience the exhibit live or read the lives of these great artists or see their works of art first hand.

The first half is mostly devoted to Da Vinci while the second half opens with the creation of the Ceiling for the Sistine Chapel and The Last Judgment. After a short filmed documentary on the Rise of Renaissance Italy, we learn that the two men were 22 years apart, Da Vinci being the elder but as rivals that hated each other. They were also opposites: Da Vinci was tall,  handsome and popular, while Michelangelo thought of himself as short and ugly. Both manifested their talents at a young age.

Ultimately, Da Vinci created 44,000 drawings of his inventions of which only 14,000 survive. We learn of his remarkable inventions some of which he could not build due to the lack of technology in the 15th century, others which were not built until the industrial revolution rediscovered them 400 years later. He was hampered by only knowing about four sources of power: wind, water, horse power and man power. He experimented with and solved problems of underwater travel, flying machines, the battleship and the automobile. He also invented and improved on existing war machines such as the catapult and what we now call the tank. Some these inventions stayed among his papers as he was a man of peace; others had two items left out so they could not be used without his express involvement. 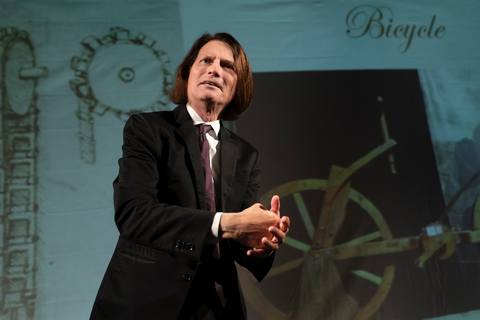 Rodgers also explains the application of many of these inventions which are now the basis of the ball bearing, General Motors Engine and the bicycle. He also invented a mirror chamber so that he could see the subject of his portraits in 360 degrees, resembling our modern 3D or holograms. We learn of Da Vinci’s three passions (painting, flight and the secret to perpetual motion) and that he worked on his masterpiece, the Mona Lisa, for 14 years. The statistic that we use 2,500 of his “designs, inventions and theories every day in modern life” is staggering.

At age 14, Michelangelo so impressed Florence’s ruler Lorenzo the Magnificent that he was invited to live in his palace among the gathering of the greatest artists and thinkers of the Italian Renaissance. Living to age 88, Michelangelo doubled life expectation at time. He was also later commissioned by two popes, Julius II and Clement VII to create his most monumental works: the ceiling of the Sistine Chapel and The Last Judgment in the Vatican.

We are told that the myth that Michelangelo painted on his back for four and one half years is untrue. However, he preferred sculpture to painting, saying that the closer painting would reflect sculpture, the better it would be, which may be his hit at his rival Leonardo Da Vinci. We learn of concerns that he worked too slowly and was taking too long to finish the work. We also learn of his love of Dante’s Inferno which informed his work on The Last Judgment. And when it was finished we hear about another artist who was hired to put loin cloths and small fig leaves on all of the nude figures for the next pope.

Directed by Bill Stine, Da Vinci & Michelangelo: The Titans Experience is not a play or a multimedia event in the true sense of the word. As an illustrated lecture, it is also not for everyone. However, for those who have open minds and a curiosity about the great works of art and science, this is a heady brew, almost revealing more information than can be taken in at one sitting. It will give you renewed admiration for the work of these two geniuses and as Rodgers ends his show, you may be inspired to “Discover the Da Vinci in You!”