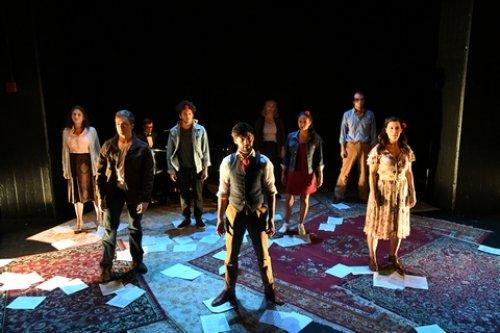 In the early 1960s, the Hungarian playwright and director George Tabori decided to honor his mentor Bertolt Brecht, who had died several years earlier from a heart attack, by stitching a sampling of his works together into a sort of theatrical collage. Culled from Brecht’s plays, musicals, poetry and other writings, the result, Brecht on Brecht, either acquiants or reacquaints its audience with the resolutely anti-fascist intellectual who, earlier than most, understood the dangers of Hitler’s Germany and believed, with every fiber of his being, that art should lead the fight against it.

Of course, Brecht’s views on what this conviction meant practically, as well as his thoughts on the social function of art in general, were notoriously uncompromising, so if alienation and dour didacticism are not your thing, Brecht on Brecht will likely wear out your patience pretty quickly. More problematically, as the PTP/NYC (Potomac Theatre Project)’s current revival of Tabori’s lauding primer confirms, if you’re not at least passingly familiar with the German author’s body of work, you might find this particular Brechtian buffet baffling, if not downright, indigestible.

Even for the initiated, several of the show’s nearly forty individual offerings fly by without making much of an impact, especially the ones that total no more than a few lines. Mostly, the issue is director Jim Petosa’s rapid-fire staging, which unfurls as if all of the actors had a strict curfew. 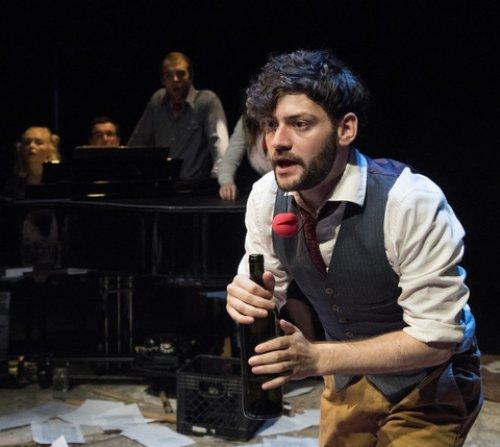 To his credit, Petosa nicely balances the actors’ workload. The ensemble never feels like they’re just gathering dust in the corners, and each of the lead actors is given multiple opportunities to shine, with the standout efforts undoubtedly being the songs and extended monologues.

Of the actors, the bar is set highest for Bryan, who Petosa tasks with two assignments that are weighted with the greatest expectation for Brecht fans: portraying the title character in Life of Galileo and singing the well-known homicidal ditty (thanks to Bobby Darin) “Mack the Knife.” In the former, theatergoers will likely find themselves drawing some modern parallels, as Bryan’s Galileo both pleads for scientific enlightenment and remorsefully acknowledges his betrayal of it. 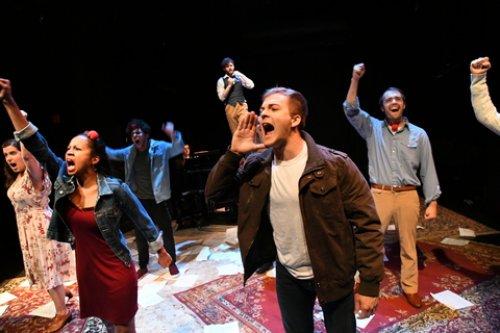 Bryan handles the part well, but it’s his version of Brecht’s murder ballad that ultimately sears itself into your memory. Accompanied by pianist Ronnie Romano, the unassuming Bryan enunciates each syllable with a deliberateness that essentially forces a fuller appreciation of Brecht’s lurid lyrics (Kurt Weill composed the music). Eventually, though, this haunting vocal restraint gives way to a visceral horror that is absolutely grotesque and mesmerizing.

Hamel also pulls off a terrific dramatic/musical combo, with a scorchingly contemptuous rendition of “Pirate Jenny” and a devastating solo turn in the short play The Jewish Wife, by far the lengthiest and most affecting work, in Brecht on Brecht. It’s told entirely from the perspective of a Jewish woman on the verge of fleeing Nazi Germany, not because she wants to save herself but, rather, because she’s worried what her continued presence might mean for her non-Jewish husband. That her impending departure is met with cool detachment shows both the limits of love and the boundless reach of antiSemitism.

Perhaps unavoidably, Brecht on Brecht often comes across as a series of highly polished auditions, eliciting the hope that, say, someone will actually cast Bryan and Hamel in a full production of The Threepenny Opera. But it’s also a stark reminder that many of Brecht’s preoccupations should still be ours.