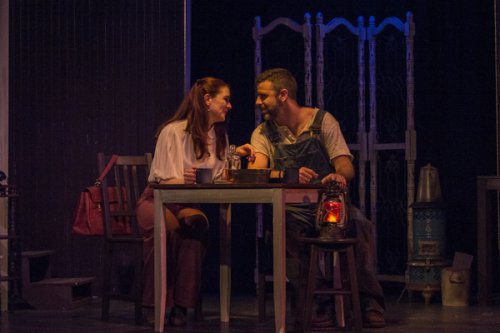 Judy Jerome and Michael Keller in a scene from “Kingdom of Earth” (Photo credit: Hunter Dowell)

Why did no one think of it before? Two Tennessee Williams’ one acts set in Mississippi with two men and one woman on the same bill. (Both of them are the closest Williams came to that other Mississippi writer, William Faulkner.) The obvious idea would have been to double cast both plays making this a tour de force for all three actors. However, Marilyn Fried who directed 2 by Tennessee Williams: 27 Wagons Full of Cotton & Kingdom of Earth unaccountably chose to have the women played by different actresses. More’s the pity as one cast is far more accomplished than the other.

Like many Williams one acts, both of these plays were later expanded into full length works. 27 Wagons Full of Cotton was the title play of Williams’ first published collection of one acts in 1945. Probably Williams’ most well-known short play, it was used as the basis for the controversial 1956 film, Baby Doll, the only original Williams screenplay filmed in his lifetime. In 1977, Williams adapted his screenplay as a stage play called Tiger Tail (the name of the town where it takes place) and it made its New York debut briefly in the summer of 1999 at the Clurman Theatre. Meryl Streep received her only Tony Award nomination so far for the last major revival of 27 Wagons Full of Cotton in 1976 which was at that time paired with Arthur Miller’s A Memory of Two Mondays.  She also garnered a Theater World Award for her remarkable performance as its heroine Flora Meighan.

Kingdom of Earth has an even more circuitous history.  It first appeared as a short story in a limited edition of Williams’ 1954 collection, Hard Candy. Although Williams was working on a stage version as early as 1957, the one act was completed in 1966 but was not published until the posthumous 2011 collection called The Magic Tower and Other One-Act Plays. When the full-length version was produced on Broadway in 1968 by David Merrick who insisted the title be changed to The Seven Descents of Myrtle, this uncharacteristic Williams play starring Estelle Parsons, Harry Guardino and Brian Bedford was a quick failure. It reappeared as a 1970 Sidney Lumet film called The Last of the Mobile Hot Shots with Lynn Redgrave now playing Myrtle. Subsequent American productions returned the play to its original title of Kingdom of Earth. In 1996, the Drama Department began its producing history with a critically acclaimed revival directed by John Cameron Mitchell and starred Cynthia Nixon, Peter Sarsgaard and Scott Lawrence which redeemed the play’s reputation. 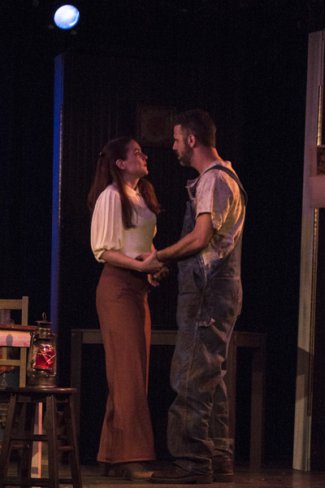 Judy Jerome and Michael Keller in a scene from “Kingdom of Earth” (Photo credit: Hunter Dowell)

Ironically, the less well-known Kingdom of Earth is the more successful of the two revivals. Set in the kitchen of a Mississippi Delta farmhouse in 1950, the play offers another one of Williams’s dysfunctional families. Lot, dying of tuberculosis, brings Myrtle, his wife of one day, back to the family farm which has been tended to by his half-brother Chicken while he has been in a sanitarium in Memphis. Unfortunately, Lot has picked the wrong day to return: a flood is expected and when old man Sykes on the next farm dynamites his south bank levee to save his north bank levee Lot’s farm will be under ten feet of water – just like the last time the Mississippi overcame its banks. While Lot is expiring upstairs, the urban-wise Myrtle and the cagey, rural Chicken bond over their mutually hard lives – and negotiate as to whether he will save her when the waters rise from under the floorboards.

As the coarse, wily, virile Chicken, Michael Keller is a three-dimensional character even in this short play, a brother to such iconic Williams characters as Stanley and Brick. Playing a cat-and-mouse game with street-wise Myrtle he gains the upper hand quite quickly. The tall, slim statuesque Judy Jerome would seem strange casting for Myrtle who is described as “short, stocky and ample of hips and bosom” as well as ten years older than her husband. However, as the 30-year-old independent Myrtle who has been around the block since she was fifteen, Jerome makes the role her own as she jockeys for power with Chicken as they tell each other the story of their lives. The sexual tension between them becomes palpable as the storm approaches. Justin R. G. Holcomb as Lot is seen briefly before he drags himself upstairs for the duration of the play. Director Fried has chosen to ignore Williams’ description of Lot as “a frail, delicately pretty youth of twenty” with the seemingly mature Holcomb. 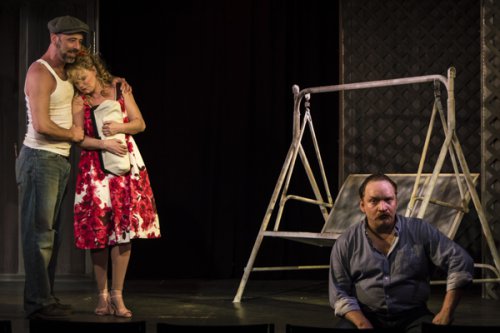 Set in Blue Mountain, Mississippi (the birthplace of Amanda in Williams’ The Glass Menagerie), 27 Wagons Full of Cotton concerns Jake Meighan, a shady, failing cotton-gin owner, and his abused, bored wife Flora. After Jake burns down the cotton gin on the nearby Syndicate Plantation, he threateningly demands that Flora  say that he was on the porch with her all evening. When Silva Vicarro, the superintendent of the Syndicate, delivers 27 wagons of cotton to Jake to be ginned, he is introduced to Flora whom he attempts to get to admit that Jake is guilty of arson. When this does not succeed, he then proceeds to seduce Flora in order to get his revenge. Both men ironically talk of “the good-neighbor policy.”

While the play can be a tour de force, Kathryn Luce Garfunkel is so one dimensional that her Flora has little weight. She exudes languidness and laziness, but fails to make Flora anything other than whiney and needy over the course of the play’s three scenes. Even after her encounter with Vicarro she doesn’t seem that much different. Holcomb seems miscast as the wily Latin though he does make Vicarro shrewd and knowing. Keller gives the most convincing performance as the sinister and abusive Jake. Unfortunately, the rhythms of the production do not make the play either the comedy that Williams subtitled it or the tense revenge drama that it also is.

John Lant and Sam Figueira’s setting for this play lacks Southern atmosphere as it simply uses a porch swing to stand in for the Meighan house and grounds, while the lighting by John B. Forbes and Tim Secrest does not suggest the hot August sun. Designer Hunter Dowell saddles Garfunkel with a loud red floral print dress that while it is symbolic of her name is rather distracting, while his other costumes for the Southern farm types are right on target. The decor for Kingdom of Earth is more effective with its basic farm kitchen setting. Forbes and Secrest’s lighting for this play suggests the coming storm, while Liz Ann Howell, Jessica Davison, and Jennifer Davison’s sound effects offer the eeriness of the rising wind and the raging river.

2 by Tennessee Williams is an interesting attempt to bring back some of the playwright’s three-character one acts which have not been seen in New York in a long time. They bring to life the Southern rednecks, the rural belles, the effete artist types, and the seductive outsiders that populate Williams’ plays. Unfortunately, this production of 27 Wagons Full of Cotton is woefully inadequate, while the unusual casting of Kingdom of Earth changes the play a good deal from the one that Williams wrote.

2 by Tennessee Williams (extended through October 1, 2016)

Running time: one hour and 55 minutes