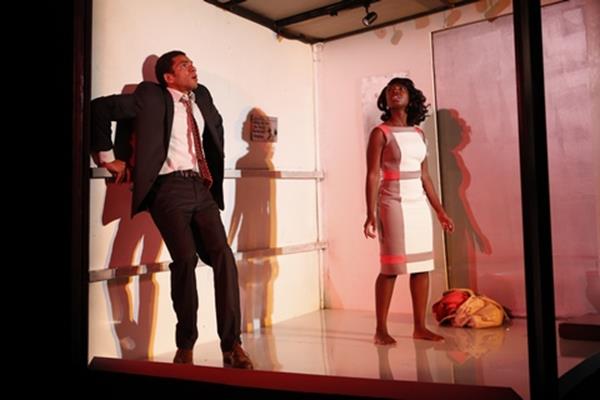 Lift is billed as novelist Walter Mosley’s first play to reach New York. He is a wonderful novelist but not yet a good playwright, and this is student work unworthy of a full 59E59 production.

The basic setup will be familiar to anyone who has taken an improv class: Tina Pardon (MaameYaa Boafo) and Theodore “Big Time” Southmore (Biko Eisen-Martin) are two strangers who find themselves stuck in an elevator. What will they do to pass the time?

It’s a common writing gambit because it elides a fundamental dramatic problem, namely how to keep a character faced with a challenge from simply walking out of the scene. In this case, however, the two don’t have anything much to challenge with. They don’t know each other, and they have no mutual friends. They have in common only that they work on different floors in a large corporation.

So the author seeds the situation by having a couple of other characters pass through before the elevator sticks. The first is Tina’s girlfriend Noni (Shavonna Banks). The women talk about Tina’s boyfriend, and Theodore can’t help but overhear. The second is John Thomas Resterly (Martin Kushner), President and CEO of the corporation, whom Theodore sucks up to and Tina attempts to ‘hide’ from (which is completely unbelievable, but it’s purely an expository device so let’s let it pass). Also the elevator is not merely stuck. We’ve heard an explosion, and the thing has somehow tilted precariously (which is, given how actual elevators work, again unbelievable).

The CEO’s appearance creates the question of why Tina didn’t want him to see her, a good enough device. The boyfriend talk turns to race (Theodore and Tina are black, the boyfriend is white, Theodore is annoyed), but nothing that is said is especially interesting.

The author’s plan here is that Tina and Theodore each have Big Secrets they are loath to disclose. I won’t spoil them, but I can say that his characters turn out to straddle cultural divides of race and class in potentially interesting ways.

Unfortunately that potential is unrealized, and for many reasons. First, after the disclosures it seems senseless that Tina and Theodore have spent the whole play hiding these things, given the potentially life-threatening circumstances. Second, Mosley seems conflicted as to whether he actually wants us to guess Tina’s secret or not: he drops clues early on that were complete spoilers to any mystery fan in the audience (though not necessarily to others). It’s not clear why he does this, the story would have played better without the broad hints.

Finally, and most importantly, the character’s disclosures don’t affect each other in any way. We know this because when the secrets are duly spilled, it changes nothing in their relationship. (Well, they get affectionate with each other, but that’s a result of the spilling, not what was spilled.)

There are some real problems with other dramatic devices as well. For example, we are told that there is no cell phone service because the elevators are designed that way (obviously for mere narrative convenience), but they are able to get an internet connection and browse the web. This is just silly, and happens far too late in the play to be excused as expository (even though it is).

To be fair to the author, there were many dramatic moments that might have been saved by a better production, and director Marshall Jones, III has not given his actors some necessary notes. The characters go through a variety of behaviors and dictions as they move from strangers to cellmates, and they were only intermittently successful. Certainly it was very clear in which moments the actors were comfortable and confident, and in which they were not. Worst was when Theodore periodically doubled over in physical distress, which was wholly unconvincing, especially after we found out the cause.

Production values were mixed, to say the least. The background projections by Rocco Disanti were simple but effective, probably the most competent thing here. The elevator set by Andrei Onegin managed some necessary complexities (they have to climb on top), but unfortunately looked less like an actual elevator than a child’s sketch of an elevator. Even when the characters struggle (unconvincingly) to pry a ‘panel’ loose from the wall, it looked and acted less like a wall panel than a tacked-up sign.

A final caveat: the playing area is six or seven feet off the ground, so I suspect the first row misses a lot.

Running time: One hour and 55 minutes with no intermission