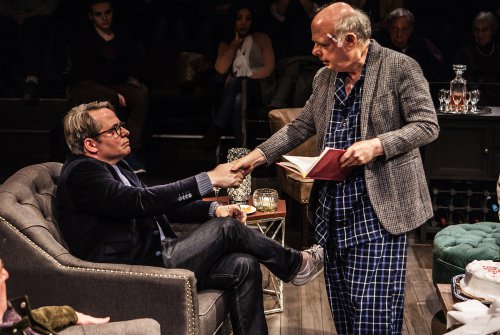 Matthew Broderick and Wallace Shawn in a scene from “Evening at the Talk House” (Photo credit: Monique Carboni)

Those who have seen Wallace Shawn’s plays like Aunt Dan and Lemon, The Fever and The Designated Mourner will not be surprised to hear that his new play, Evening at the Talk House,his fifth to be produced by The New Group, features another subtly dystopian world, one that by extension is not so very different from our own.

However, as the title implies it is also a very verbose, long-winded affair giving an excellent cast made up of such veterans as Matthew Broderick, John Epperson (a.k.a. Lypsinka), Jill Eikenberry, Larry Pine, Claudia Shear and Michael Tucker not much to do. Shawn has written the best role for himself but that is not saying much. While the play may be meant as a cautionary tale, it is also over-written and self-indulgent. Long before you realize where the play is going you may have lost interest due to all of the explanations.

Ostensibly, the characters have been invited to an evening at the Talk House, a club/restaurant like the Players Club, The Lambs Club, Sardi’s or Joe Allen’s where theater people gather. It it the tenth anniversary of Robert’s play Midnight in a Clearing with Moon and Stars and Ted, the play’s composer of incidental music, has sent out invitations for this reunion to people for whom the play represented happier times. 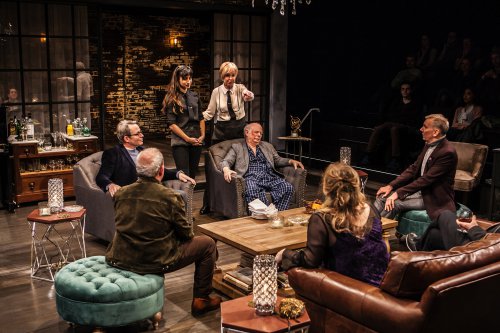 These include the author Robert (Broderick) now the head writer and story editor on America’s most popular television show, Tony and Company, the producer Bill (Tucker), now a talent agent; Annette (Shear), the wardrobe supervisor, now a seamstress for the very rich, and Tom (Pine), the stage star of Midnight and now the darling of the small screen as Tony in Robert’s t.v. series, and Ted, now writing advertising music. The genial, popular host of the Talk House is Nellie (Eikenberry), famed for her delicious snacks, and assisted by Jane (Annapurna Sriram), an aspiring actress ten years ago but due to career set-backs has had to find other work.

When the audience arrives, they are met by the cast who offer them marshmallows, gummy bears and brightly colored sparkling drinks. The seating is on either side of the comfortable, cozy room with its sofa, arm chairs, sideboard, and cocktail tables. Robert gives a 20 minute monologue explaining the event before the play actually begins. As becomes obvious from the early conversations, theater has gone out of favor as has the Talk House, and these once successful thespians have had to find other lines of work. The world is very different than it had been: elections are held every three months and the same people seem to win all the time. And as Robert warned us initially, people have to be very careful what they say as “walls have ears – as do floors, ceilings, windows, doors, plates, cups, spoons, forks, and come to think of it, other human beings.”

The friends initially reminisce about the play at which they all worked and what they have been doing since. But an uninvited guest is there: Dick (Shawn), an alcoholic, once a successful actor, now fallen on hard times. He also appears to have been badly beaten up, and he tells us that friends gave him this warning. Little by little, we find out that the government is indulging in targeting, that is state sponsored assassinations of the undesirable, harmful or people who have become embarrassments to the new system. And eventually, several of the guests admit that this how they have been making a living lately. 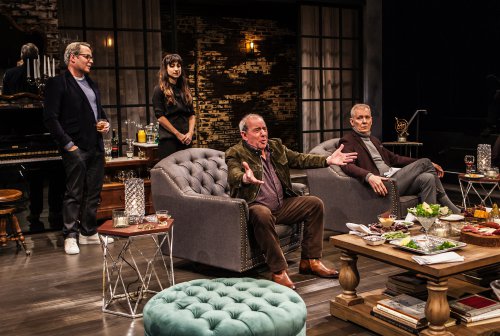 Is Shawn saying that artists have been complicit in America’s turn to the right and that they are cowardly for not standing up to the evil forces now at work in the world? Robert’s play was a medieval fantasy, usually a work of escapism. And the casual way all talk of the killings suggest everyone has fallen in line. As the play has no highpoint or tension throughout until the final moment and that it is made up entirely of talk throughout – mostly of name-dropping of made up people – it dilutes the seemingly powerful message. This is a case where the medium becomes the message – the low-key evening of chat is all we come away with. Director Scott Elliott’s drawing-room comedy style throughout undermines the serious point being.

The character roles are mostly labels. Broderick is the bland playwright who has compromised and made use of the support of important people who he may not admire. Pine’s Tom is the well-beloved television star who in his personal life is most innocuous. Tucker’s former producer, now successful in a new career, is not very concerned with what is happening in the outside world. Eikenberry is the cheerful and kindly restauranteur who may have made a mistake by taking in Dick, a suspected undesirable. Shear and Epperson play characters who have had to come to terms with their new life styles, but do not see much wrong with it. Only Sriram gets to lament the life she is now living, and a past that is dead and gone. Shawn has given himself the juiciest role, Dick, a man who speaks the truth and has no filter.

Set designer Derek McLane is responsible for the appealing atmosphere of the club living room which helps to lull the characters – and the audience – into a sense of comfort and peace. Jeff Mahshie’s pitch-perfect costumes suit the characters to a t, including Shawn who is dressed in pajamas topped by a sport jacket. The lighting by Jennifer Tipton is warm and cozy until we are plunged into darkness (the electricity goes off periodically we have been told) and the set is lit by candles. Evening at the Talk House may be a cautionary tale for our time, but its format, presentation and its long-winded chat undercut its potential power and important message.