“…dammit I didn’t know either,” Raymond Chandler replied when asked about the fate of one of the characters in his convoluted detective novel The Big Sleep.

The Ballad of Rodrigo is the well-crafted second part of playwright Jason S. Grossman’s Double Crossed, an affectionate 1940’s and 1950’s film noir inspired trilogy. A synopsis of the first chapter is included in the program though one can follow this play without having seen the prequel or even reading this recap. “Never bet on anyone but yourself,” the hero wearily intones. Movie fans familiar with these characters and conventions, as well as those less familiar with them, will all find much with which to be entertained.

“It pays to live in the shadows,” says the villain during the intriguing opening sequence. A black and white slide of a dark cityscape is projected to moody bleak music. A slideshow of a mock newspaper, The Daily Page, is played with the headlines and Weegee style photographs imparting the crime drama plot points of the previous chapter. It is established that we’re in a hyperbolic film noir universe highly faithful in tone and presentation to numerous classic films of that genre. Inexplicably though, characters often take out flip cell phones to converse. Since it is all played with total seriousness, it doesn’t seem out of place but like part of a surrealistic fantasyland.

Much of the action takes place in a greasy spoon run by cheery and kindhearted Sally. Underworld figures, a fast-talking reporter, G-Men, honest and crooked cops, a double-crossing dame and the conflicted hero gather there to conspire and eat grub. The author vividly renders all of these typical characters with attributes and personalities true to the ones encountered in hard-boiled movie yarns.

The cast is so fascinating in their immersive total commitment to their roles that they often bring to mind comparisons to their cinematic counterparts. Long lean Alison Parks fiercely evokes every troubled duplicitous broad from Ida Lupino to Gloria Grahame. As chatty Sally, Cindy Keiter wonderfully conveys comedy and pathos in the style of Thelma Ritter. Sympathetic Gregory James Cohan as Freddie Tower, the conflicted hero on both sides of the law, forcefully conjures up allusions to the many parts Sterling Hayden played in that era. Matthew J. Nichols portrays the vicious Rodrigo as a glorious recreation of the sniveling Richard Widmark in Kiss of Death.

With his overcoat, reporter’s notebook and rapid-fire delivery, Allen Warnock is the perfect embodiment of every snoopy journalist who cracked a case wide open. As the police on all spectrums of justice, Ridley Parson, Charles Wilson, James Holden and Lars Drew are a spellbinding team who all skillfully play out their L.A. Confidential style subplot with great zest and emotion. 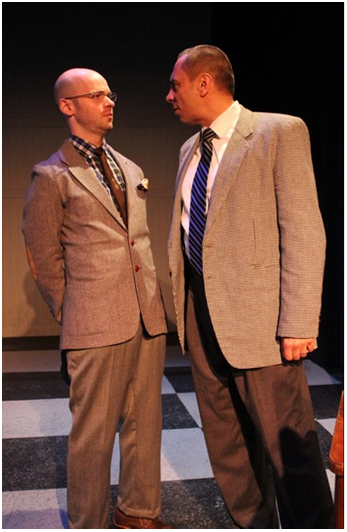 Allen Warnock and Charlie Wilson in a scene from Double Crossed: The Ballad of Rodrigo (Photo credit: Jane DeBartolo)

Director Amber Gallery solidly holds all of the tangled events together with her assured staging, inspired visual flourishes and deliberate pacing.

A key contribution to the success of the show is set designer Jason Bolen’s black and white square floor tiles and the plain diner and police station set ups. With simplicity and clever minimalism he skillfully captures the look of the black and white locales depicted in Warner Brothers and Columbia Pictures. Mark Hankla’s lighting design and Aaron Gonzalez’s projection design artfully and faithfully duplicate the desired grim look of that cinematic world. From boxy suits, flowing overcoats, fedoras and black leather jackets, costume designer Izzy Fields marvelously dresses everyone to look as if the cast had stepped off of a movie screen.

After the startling and compelling opening scenes, Mr. Grossman’s fanciful slang-laden script sometimes lumbers resulting in a languid pace. However, like the films he pays tribute to, there are a myriad of engrossing twists and turns that build to a riveting finale.