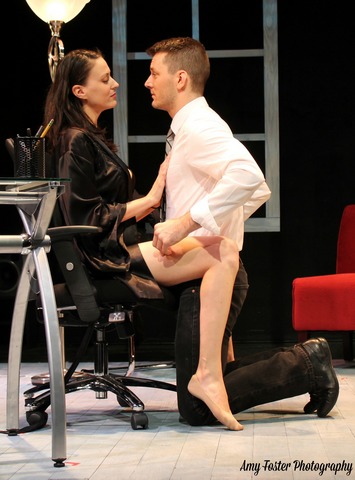 Throughout history, the supernatural has always been a topic of interest in the theater. From as far back as the Greek tragedies, the idea of a higher being ruling the mortals of Earth has been discussed in many plays. As time has gone on and more forms of theater have emerged, playwrights are increasingly—in many different ways—blending in these mythical elements with a more grounded plotline to create a melded story combining both reality and fantasy. Unfortunately, not all attempts are as successful as others, and while Devoted Dreams by Christopher P. Latro reaches for the stars, this particular production only hastens the play’s fall back down to Earth.

As the lights come up, we are introduced to a universe-ruling monarch,  Zachary (Shelley Valfer), and his wife Emery (Barbara Thomas), respectively, who somehow need to shape the path of a group of humans on Earth, without actually making their presence known. After a lengthy monologue by Zachary to open the show which is a confusing mash up of heightened and contemporary language, the pair decide the best course of action would be to send their son Silver down to Earth to act as a human and shape the lives of these morally troubled few.

From here things got pretty hairy. It was decided that the role of Silver should be cross-gendered, so that the youthful and boyish looking Michelle Girolami was cast as the spritely son of the Rulers from above. Though this choice is pretty obvious and glaring to the audience, Girolami makes the best of the role and is engaging enough to distract from the casting decision.

Silver heads down to Earth and is found alone in a park by a woman named Lesley (Sarah Swift), who happens to be one of the subjects of the Monarch’s mission. Swift’s Lesley takes Silver to her and her husband’s household to take care of him, and what ensues is a confusing conversation where this supposed boy questions Lesley’s decision to take home a child she found alone in the park, questions her relationship with her husband Alexander (Brandon Alan Smith) and goes as far as to suggest that maybe Lesley and Alexander aren’t on the same page about what they want in life—namely a child.

Then we are introduced to Alexander, a hard-working business man with a lot of promise. Smith’s Alexander is a character with terrible decision-making skills, and as the male protagonist is the most morally suspect character in the play. After some not-so-subtle exposition, it is revealed that Alexander is embezzling money from a client company and is also having an affair with a woman who happens to be involved with the chairman of the company from which the fraud is being enacted upon. 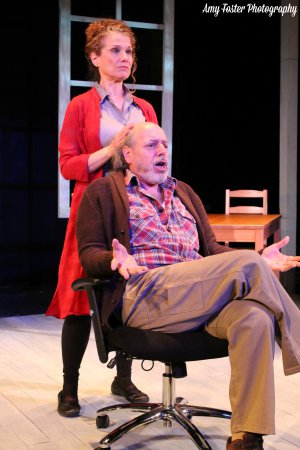 Here’s where things really fell apart: the decision was made to double cast three major roles in the play with three other roles which were really not that different from their counterparts. For example, Lesley, the wife of Alexander, was also cast to play Alexander’s lover Eva. The actor Ray Field was cast as Gravier, the chairman of the company which was subject to the embezzling, and then also cast to play Alexander’s boss Youlensky. This last example might have worked except the acting choices which were made were not strong enough to distinguish one role from the other. Lastly, the actors for the Monarchs (Valfer and Thomas) were double cast as the parents of Alexander, Mr. and Mrs. Blumenthal. The choice to cast the Monarchs as the parents works the most, but only because the parents’ characters have the least to do with the plot.

The most mind-boggling choice was to use the same actress to play both lover and wife. This decision made it nearly impossible to garner an emotional response from the audience, in large part due to the dilution of the implications of adultery. Serving no aid to the casting, the costume designer (Michael Alan Stein) does little to indicate that the actress is playing two characters—save for putting on a pair of black pants for the wife and wearing a black dress as the lover. The script certainly didn’t help this choice either, as there were multiple instances where Swift had to quick change between lover/wife because scenes featuring one of the two characters were placed directly following the other.

This leads to an equally challenging subject. The scenic design by Lauren Mills is curiously minimalist for a seemingly high concept project. The basic set was the structural outline of a house, with white window frames hanging against a black backdrop. A desk, table, and a few chairs were on stage for the entire play, and almost none of these set pieces moved between scenes. What resulted was one large wash of a scene which didn’t really take place in any specific location at all. Maybe it was intentional to feel abstract, but the whole production felt as if there was never really a beginning or an end. Lighting design (Jamie Roderick) is as simple as a few blackouts, and at times there are actors changing costumes on stage and no theatrical lighting techniques were employed to conceal this at all.

Directed by Anna Bamberger, Devoted Dreams is a mind-boggling production. It would seem as if the objective was almost to minimize this production as much as possible, as a challenge to play against the mythical and high-concept subject matter. Despite the short-sighted production values, there are also structural problems in the script which were not concealed in the slightest by the casting decisions and certainly didn’t help the actors. Though it is true in some cases that less is more, in this particular situation the concept might as well be thrown out the window.