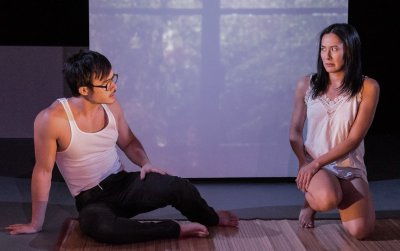 In 1967, the Vietnam War was in full swing, the “flower power” movement was gaining traction across the country, and Asian Americans were fighting hard to repel the alienation of their race and integrate into American culture. In fact, at this point in time the term “Asian American” hardly existed, and instead an entire people were constantly reduced to slanderous and offensive terms—the least of which was “Oriental.”

Enter Charles Francis Chan, Jr., aka Frank Chan (Jeffrey Omura), a man on a mission to liberate his race once and for all and establish “Asian American” as the official term to describe this new wave of immigrants in 20th century America.

The National Asian American Theater Company’s world premiere of Lloyd Suh’s Charles Francis Chan, Jr.’s Exotic Oriental Murder Mystery is best categorized as fiercely provocative satire. The play has two storylines. The first follows a 1960’s Frank who is developing and producing a murder mystery; the second being scenes from the aforementioned murder mystery, which is a stylized production featuring an Asian woman in white face as an elegant old debutant, and conversely an American Vietnam veteran in brown face as the Asian Detective Charles Chan, namesake to the production. 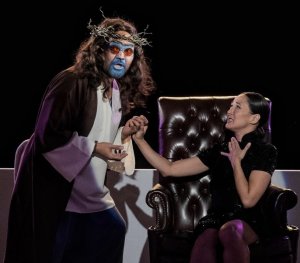 Based on Agatha Christie’s The Mysterious Affair at Styles, Suh challenges racial and sociopolitical stereotypes in a way which is entertaining and light-hearted but also meaningful. The small cast of six are all double cast in a second role, with the exception of Orville Mendoza as Monkey, Frank Chan’s imaginary guide: a beret wearing capuchin monkey with his face painted blue and a big orange tail protruding from his coat. Monkey is a guitar playing, quick-witted companion who provides insightful advice to Frank, and much laughter to the audience.

Jeffrey Omura’s Frank is a likeable protagonist, a scatter-brained young man filled with ambition and passion. Slightly delusional in his aspirations (this character trait manifested via Mendoza’s imaginary guide, Monkey), Frank’s intellectual rants are both hilarious and informative—a balancing act conducted by Omura which shows both a rich understanding of the subject material as well as a keen eye for comedic timing. Omura is also double cast as Hastings, the detective investigating the murder central to the intra-story plot.

Aside from his socio and political aspirations, Frank’s story is also one of emotional growth. Early on, Frank is tossed out of a long-term relationship with Suzy—played by K. K. Moggie, also double cast as Eleanor, the previously referenced character performed in White Face—thanks to his frantic nature, and seemingly directionless aspirations. This leads to his pairing with Kathy (Jennifer Ikeda), his eventual wife and collaborative partner. Kathy is a tenacious woman with a fiery spirit; a fitting spouse for Frank that matches his passion and ambition, but also takes a more pragmatic approach to contrast Frank’s dogmatic demeanor.

Directed by Ed Sylvanus Iskandar, the production is impressively consistent in its style, form, and pace. The actors’ respective performances are heightened when necessary, but—crucially—grounded. The varying transitions between storylines are seamless, and many different tactics—including musical performances by Monkey and the rest of the cast—are employed to distract the audience as the set changes from one location to the next. 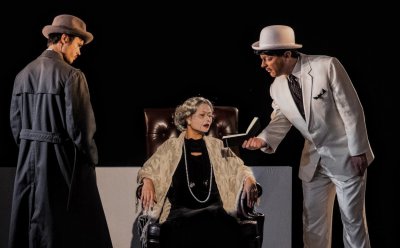 Performed at the Walker Space, the theatrical effects and lighting design by Seth Reiser combine to create quite a spectacle. Set design by Jason Sherwood is sleek—the entire set is painted white—and the clever use of a projection on a scrim in between set changes results in one of the more fascinating moments of the evening. The costume design by Loren Shaw is appropriate for the two storylines: the real-time story features colorful flower power garb, while 1920’s overcoats and noir-esque apparel outfit the characters of the murder mystery.

Clever, witty and engaging, Lloyd Suh’s high-concept play is about as unique as it gets for New York theater. The play constantly teeters between hilarious and offensive, and the exploitation of racial stereotypes spurs much laughter but also serves as a reminder that there is a lot of work to be done before racial inequalities are totally eradicated from society.