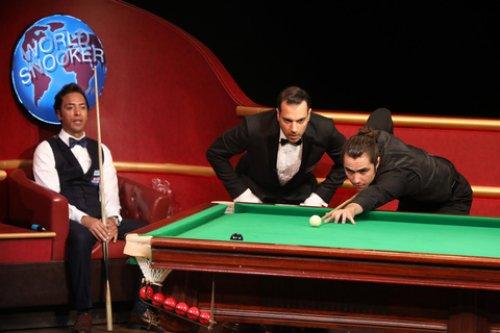 Harold Pinter meets David Mamet meets Neil Simon meets Alfred Hitchcock in the richly suspenseful comedy, The Nap, which originally played at the Crucible Theatre in Sheffield, England, where the play is set. While its title might suggest a snooze of a play, as written by Richard Bean (of One Man, Two Guvnors fame) it ricochets with more trigger turns than an ess curve.

The title actually refers to the felt covering of a Snooker table, and if you were wondering what Snooker is, it’s the British equivalent of Billiards or pool, with different rules. As the play unfolds, we learn a great deal about Snooker including that it was invented by the Brits in India in 1875.

It isn’t revealing too much to say that the play culminates with a real Snooker match between two men vying ultimately for the world championship and ostensibly being watched by 23 millions viewers all over the world. And since they’re playing in real time, Bean had to come up with alternate dialogue, depending on which of them wins. Those two men are the local Sheffield champ, Dylan (Ben Schnetzer), and his competitor Abdul, who is played by world-class Snooker champion Ahmed Aly Elsayed. (Elsayed actually won the Egyptian Snooker Championship for three consecutive years before moving to the USA and winning US National Snooker Championships for another three consecutive years.)

With all of this as background, what emerges is a love story plus a tale of multiple betrayals. And as clear as the writing and storytelling are, you never really know where you’re going until The Nap gets you there in the end. 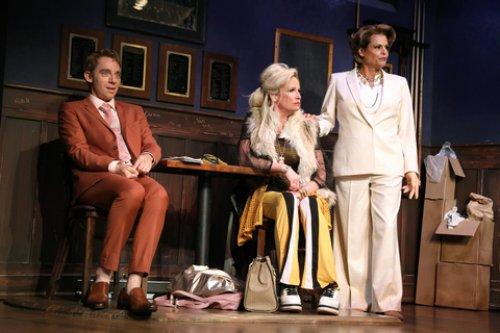 Under Daniel Sullivan’s direction there’s a top-flight, 11-person, ensemble performance, featuring Alexandra Billings in a knockout appearance as the transgendered Waxy Bush, a gangster with a hidden agenda and a black-gloved wooden hand. (Dr. Strangelove, anyone?) A star of TV’s Transparent, Billings delivers a strictly tour de force performance from the get-go, saying, about Dylan, “Aren’t we all lucky to have this child effigy in our mist.”

The other characters include Dylan’s father Bobby (a sympathetic John Ellison Conlee), a one-time Snooker player himself, who served time for dealing drugs, and Danny’s mother Stella, who’s portrayed by a suitably gaudy Johanna Day. As we learn soon enough, before Waxy had her sex change, she was Stella’s boyfriend, Mickey Bush. (Waxy is also Dylan’s principal sponsor.) And then there’s Stella’s current boyfriend Danny, who’s brought to comical life by the stalwart Thomas Jay Ryan, and Dylan’s manager Tony (Max Gordon Moore), whose loud, pastel colored suits show off Kaye Voyce’s dead-on costume designs. Have there ever been better-designed costumes to define the characters as much as the script does?

There are also, early on, Mohammad (Bhavesh Patel) and Eleanor (Heather Lind), who claim to be from the “Gambling Commission” and arrive at the dingy practice hall, where Dylan has just finished ironing “the nap,” warning him against “throwing” a game. As they explain, just last week in Brussels, where he won the first six frames, there was a “spike” on the first: “Five million Hong Kong dollars. All of it placed on you to lose.” We also learn that as his sponsor, Waxy has spent £50,000 on Dylan, over the years.

Even more than its focus on Snooker, much of the script is devoted to describing Waxy–who she is, what she is, who she was, and on and on and on–before we meet her. It’s a tribute to both Billings and Sullivan, that it’s nothing of a letdown when she finally arrives on stage. (Consider Bean’s description of Waxy’s arrival in the script: “Enter Waxy. A woman of about fifty five, well dressed, heavy make up, and a wooden left arm with a silk glove on it.”) And then, there are the constant malapropisms Waxy utters, such as saying “mist,” above, when she meant “midst,” or saying “optometrist” instead of “optimist,” or “allegations,” when she intended “accusations,” and her forever mangling the Shakespearean quotes she uses. 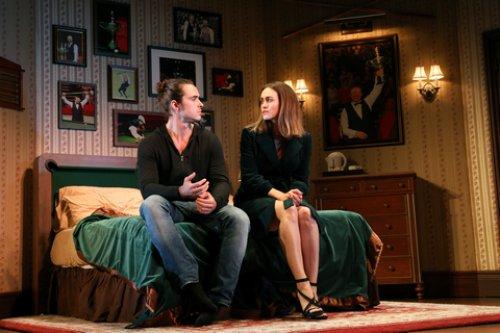 As it shuttles us from that seedy “British Legion Snooker Room” to a hotel room–with décor devoted to a previous Snooker champion, who used to live there–and Waxy’s garishly flamboyant living room with a zebra-striped chest, no less, David Rockwell’s extravagant set designs are never less than dazzling. In fact, if every character has an element of sleaziness, it’s hard in the end, not to pity them their backgrounds and baggage.

Though Sullivan brings a pristine realism to the proceedings, The Nap is first and last a well-made play, so tightly drawn that it keeps on snapping into action–and that’s without the Snooker game that comes at the end, which entails tying up a great many strands we didn’t even know were loose.