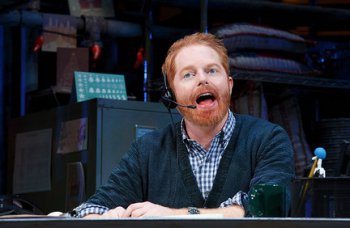 The restaurant industry is a breeding ground for eccentric personalities, and in no place more so than those to be found in New York City. Portraying over 40 characters in 80 minutes, Jesse Tyler Ferguson stars in the first official Broadway run of Becky Mode’s Fully Committed, a dissertation on the New York restaurant industry and an acting lesson all rolled into one.

Meet Sam, a struggling New York actor whose day job is as the reservationist for a popular albeit fictional Manhattan restaurant. Seemingly surrounded by phones at every turn, Ferguson’s Sam has devices that connects him to the chef, the hostess, his manager, as well as to the outside World and those looking for a much sought after reservation. Demonstrating a full spectrum of physical and vocal capabilities, Ferguson manipulates his body and voice to bring to life the many characters that Sam interacts with over the phone.

For the most part, Ferguson has successfully created a unique characterization for each of the personalities he embodies; however, some roles are not as developed as others. Some characters—who are maybe in the play for only a line or two of speech—are portrayed more broadly than those who Sam speaks with on multiple occasions. At times, the script does fall into the trap of stereotyping, a prime example of which would be Ferguson’s portrayals of bussers, runners, or any other lower level kitchen staff, whose speech patterns are curiously similar to one another.

Though some of his characterizations are more unique and clever than others, Ferguson’s efforts largely are impressive and commendable. Ferguson is at his best not when he is on the phone with the random New Yorkers vying for a reservation, but when he’s speaking with those characters that make Sam call into question the validity of his job and his priorities.

With the help of director Jason Moore, Ferguson has brought to life a character who isn’t just a vehicle for a turntable of personalities, but a human being with needs, desires, and a deep longing for a sense of fulfillment. Sam’s obvious pain and apprehension discussing his acting career is uncomfortably honest, and is something with which surely many people can relate. His interactions with his father are also poignant, in that these are the moments where Sam becomes more than just a character, but a man with everyday problems and struggles. 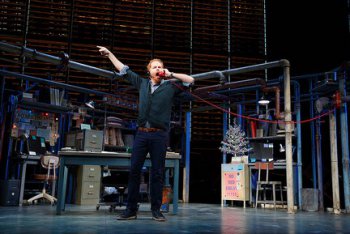 Presented at the Lyceum Theatre, Fully Committed in Broadway form is a beautiful thing. Derek McLane’s scenic design is spectacular, and he has created a living, breathing apparatus to represent the mysterious and dark netherworld of Sam’s restaurant. A contraption made of hissing and shaking pipes, filing cabinets, and weatherworn posters and signs, the set is meticulously designed and engineered. Furthermore, flowing out of the top of the set and nearly reaching the proscenium arch is what can only be described as a tornado of restaurant chairs, a clever and realistic representation of the industry in New York.

Backed by an affable and charismatic lead actor, Fully Committed is a well-rounded production that is fun and energetic, and—between the myriad of characters popping in and out of the story—has a message full of heart and sincerity. With an updated script to accommodate the current climate of the hospitality business in New York, Becky Mode has created a timeless account of a New Yorker that is one all too recognizable.