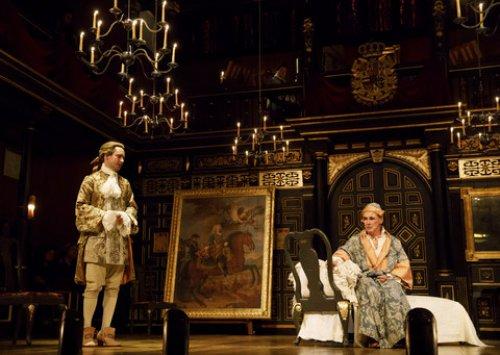 Sam Crane as Farinelli and Mark Rylance as King Philippe V in a scene from “Farinelli and the King” (Photo credit: Joan Marcus)

In a role he was born to play, Academy Award and three-time Tony Award winner Mark Rylance stunningly returns to the Broadway stage as King Philippe V of Spain in Farinelli and the King by his wife, composer and musicologist Claire van Kampen. John Dove’s lavish and elegant production with live music played on period instruments by seven musicians seated in an onstage balcony, countertenors Iestyn Davies and James Hall alternating as the singing voice of Farinelli, and with audience members seated in stage boxes, this is a superior entertainment. The only flaw is that the script which gives little backstory and just as little history is more of a scenario for an opera libretto than a fully fleshed out historical play.

When we first meet King Philippe in 1737, he is suffering from manic-depression in his palace in Madrid. In the middle of the night, the king unable to sleep is attempting to fish for a goldfish in a bowl which he carries in one hand, his fishing pole in the other. This sort of erratic behavior has been going on so long that Don Sebastian De La Cuadra, his Chief Minister, is ready with abdication papers. His beautiful second wife Isabella of Italy is at her wits end as for a long time the king refuses to get dressed or attend cabinet meetings, and alternates between melancholy and violence.

And then Isabella decides to try one last thing: she hires the world’s most famous castrato Farinelli to come from London and sing for her husband. Farinelli’s heavenly voice turns out to have a tremendously calming influence on Philippe but a new problem arises: will Farinelli stay in Spain or will he return to London and his career on the opera stage? Philippe worries that if Farinelli leaves he will decline into total madness. The effect of music as a cure for mental illness has been known since at least 1695 as stated by playwright William Congreve’s “Musick has charms to sooth a savage breast” in his one tragedy, The Mourning Bride, and music is often piped into medical institutions today as a form of therapy. 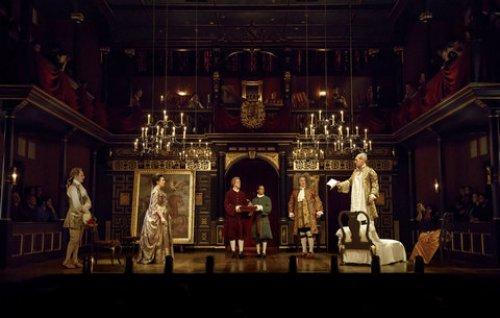 While the play entertains and the performances hold one’s interest, there are holes in the script. We learn nothing of the causes or beginnings of Philippe’s illness, we have to take it as given. Although we know that he is the grandson of the French King Louis XIV, we learn nothing about his history or his first marriage. In addition, the only thing we learn about Farinelli is that he is Italian and that his composer brother arranged for his castration when he was ten to preserve his angelic voice on the death of their father.

We are told that Isabella is from Italy but nothing of how she became the Queen of Spain or how long she has had to cope with her husband’s illness. It is possible to enjoy the play without asking these questions but the play makes us wonder about these things to which we are given no answers. Aside from the scenes in Madrid and later a Spanish forest to which Philippe, Isabella and Farinelli retire, there are low comic scenes at the opera house in London with impresario John Rich which are different in tone from the rest of the dialogue.

Giving a performance of the caliber of his earlier Shakespeare’s Globe portrayals of the Countess Olivia in Twelfth Night and the title role of Richard III which also played Broadway’s Belasco Theatre, Rylance is mesmerizing. He is one of a handful of actors who when they are on stage you cannot take your eyes off them. Playing the gamut of emotions, as well as playing off of the audience, Rylance continually takes us by surprise at his choices. His famous speech pattern which includes hesitation is perfect for the mad king who often seems to change direction midsentence. Even when he is silent he commands the stage. As we listen to Farinelli sing, we watch Rylance’s face to see his joyful reaction which tells us all we need to know. It is no wonder that he is often called the greatest stage actor of his generation. 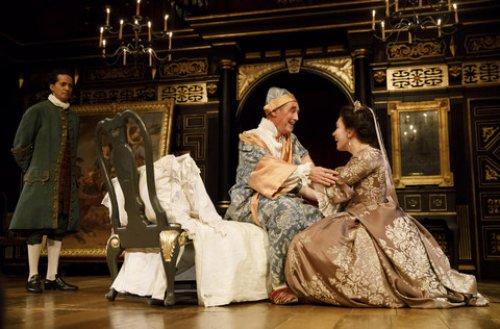 Huss Garbiya as Dr. Cervi, Mark Rylance as King Philippe V and Melody Grove as Queen Isabella in a scene from “Farinelli and the King” (Photo credit: Joan Marcus)

Playing on the idea that artists are two people, their talent and their private life, van Kampen has Farinelli played by two people: Sam Crane acts the role, and countertenor Davies (Hall at matinees until the beginning of March when the schedule changes) appears periodically to sing the nine baroque arias all but one from Handel operas. Dressed identically, Crane and Davies look like twins and both remain on stage when Davies is singing. The device is at first off-putting but just as Philippe has two personalities, we grow used to two Farinellis. The real surprise is that the arias that van Kampen has chosen as music arranger while lovely show no excessive demands or embellishments for which Farinelli was famous. The music is beautiful but not dazzling or flashy.

Jonathan Fensom’s sumptuous setting for the 18th century Spanish palace in black and gold lit by candlelight (in Paul Russell’s atmospheric lighting design) for the first act is similar to that of the Shakespeare’s Globe productions of Twelfth Night and Richard III. The second act uses a floral drop and potted plants to take us to the forest outside San Idlefonso to which Philippe has retreated to get away from court life in Madrid.  Fensom’s 18th century costumes are also magnificent in the style of court life in the 1730’s. The notable hair and wigs are by Campbell Young Associates.

Aside from Rylance and American actor Lucas Hall as the servants Miguel and Jethro, the rest of the cast is made up of actors from the original London production. Except for Colin Hurley who appeared in Twelfth Night and Richard III with Rylance all are making their Broadway debuts. Crane’s Farinelli (the actor) is retiring, humble and soft-spoken in the presence of the king. While Davies as the singing voice of Farinelli beautifully delineates his nine arias, he is rather bland in the acting department.

As Queen Isabella (Elisabetta in Italian), Melody Grove is charmingly compassionate as Philippe’s loving consort but we do not get a handle on what kind of woman or politician she is. But then the play is silent on those topics also. Edward Peel is rather over the top as Philippe’s chief minister, Don Sebastian De La Quadra, while Huss Garbiya as his medical adviser, Dr. José Cervi goes in the other direction as is rather self-effacing even though he also appears to have a good deal of power. Hurley goes for easy laughs as the put-upon theater manager John Rich who is bankrupted when Farinelli chooses not to return to London.

With this cast led by Mark Rylance, Farinelli and the King is a polished and stylish entertainment with its authentic 18th century ambiance. However, the script by Claire van Kampen has many of the hallmarks of a first time play. One cannot imagine this played by a lesser cast. Rylance, on the other hand, rises to the occasion and gives another one of his extraordinary performances. He seems to be enjoying himself enormously and so will you.

For tickets, call 212-239-6200 or visit http://www.farinelliandthekingbroadway.com