Kate Loprest and John Patrick Hayden in a scene from “The Big Broadcast on East 53RD” (Photo credit: Carol Rosegg)

So far in 2017, the concepts of “fake news” and “alternative facts” have effectively monopolized the mainstream media. In an attempt to make a statement on the bizarre times in which we live, Dick Brukenfeld has brought to the stage of the TBG Theatre The Big Broadcast on East 53rd, a head-scratching 1980’s comedy which does it’s best to make something out of nothing but hardly manages to make a statement in the least.

Here’s the premise: Penny (Kate Loprest) and Ray (John Patrick Hayden) are married and living on the east side, and for whatever reason they are both experiencing different feelings of unrest in their current situation–marriage or otherwise. One morning while perusing the New York Times obituaries section, Penny curiously comes upon an obituary for her husband Ray–who isn’t dead and is standing in the room with her. 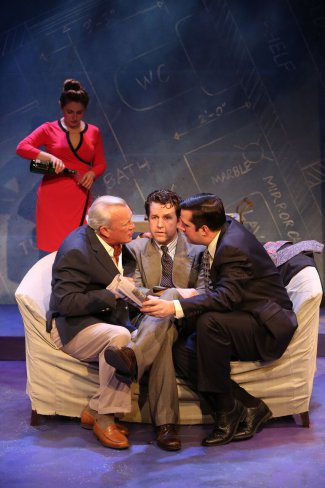 Loprest and Hayden do well enough given the circumstances, but the relationship is clearly lacking chemistry, a noticeable flaw which makes the play’s far flung premise that much harder to grasp. Halfway through, for motivations still unknown, Ray’s brother Mungo (Chris Thorn) shows up and he as well is convinced of his brother’s death. Mungo and Ray debate for ten minutes about whether or not Ray is actually dead, and at this point it is made pretty clear that Mungo’s character is more of a hapless throw-in by Brukenfeld than anything else.

Rounding out the cast are Alexis Bronkovic as Ruth–Penny’s best friend–and Bill Tatum, who plays Ray’s boss. Once again, the driving motivation behind nearly every character is nowhere to be found. It seems that simply for the sake of creating a play about fake news, Brukenfeld opted to fill his script with lifeless characters that don’t question anything and are content to believe that Ray is dead. The performances across the board are unsympathetic and played mind-bogglingly straightforward. For what it’s worth, the actors do all that they can with the material at hand, turning in acceptable performances given the circumstances. 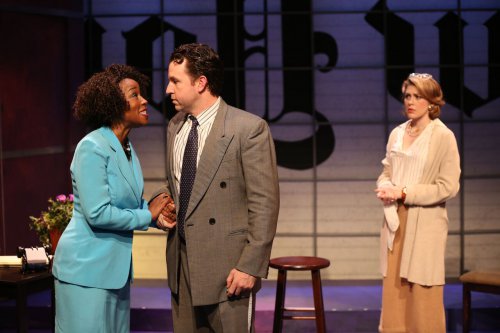 Directed by Charles Maryan, the play moves quickly–despite the script’s hindrances–but is in general uninteresting. The most likeable aspect of the production is the set design by Atkin Pace, which is colorful and dreamlike and features clever lighting design by Jamie Roderick–projections of newspaper articles and copy are spread across the dark blue walls of the theater in bright shades of white and yellow, an eye-popping gimmick which is pleasing aesthetically. However, though the production design is interesting, it is also uncomplimentary to the play’s time period of the 1980’s and is more appropriate to a production set in contemporary times.

The thin premise of Ray’s falsified death is the driving quandary behind this entire play, a trivial subject which is exhaustingly beaten to death by the play’s end and isn’t complex enough to sustain a 90 minute production. A play about fake news is certainly a clever and timely idea, but the shallow plot on which this play is founded has very little to say of any significance. The result is a flat production which leads to an unsatisfying and unfulfilling theatergoing experience.