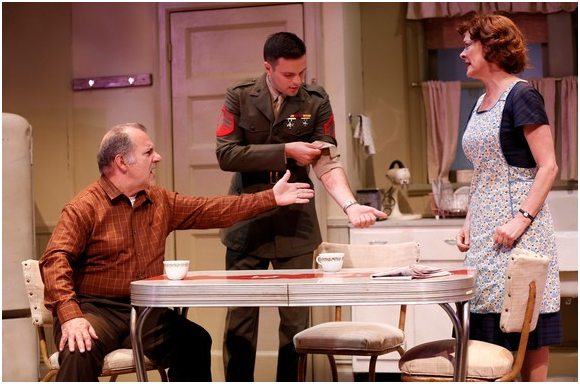 in a scene from Almost Home

Vietnam marine veteran Walter Anderson’s first play, Almost Home, is an old-fashioned kitchen sink drama complete with working sink, stove and refrigerator. It tells the engrossing story of Sergeant Johnny Bennett returning to his Bronx home from Vietnam in 1965 after four years in the marines on a 72-hour pass with a big decision to make as to his future. The high-powered cast including Tony Award winner Karen Ziemba as Grace Barnett, Joe Luisi, from the original cast of the Tony Award winning Take Me Out, as her husband Harry, and Jonny Orsini, winner of the Clive Barnes Award and Theater World Award for 2013’s The Nance, as the returning soldier, does well with Anderson’s gritty and realistic dialogue. Unfortunately, as a new playwright Anderson’s dramaturgy is weak and he leaves many important themes and questions undeveloped.

When Johnny gets home to his parent’s apartment near White Plains Road and 214st Street, he has two choices: he has been offered an opportunity to stay in the marines as a drill instructor in San Diego and is also considering attending a junior college in California which had accepted him. What he doesn’t know is that shady Captain Nick Pappas of the 47th Precinct who helped him out in the past when he had gotten into trouble as a street kid is expecting him to go into the police academy and to be of use to him in the department. Recently elected Mayor Lindsay has announced that he is planning to investigate the Bronx police department and Pappas wants someone in his corner. And Pappas has a hold over Harry that may swing the decision his way.

In a prologue set seven years earlier, we discover that Johnny’s father is indebted to Pappas for making a charge of drunk driving and resisting arrest go away. Harry is now an alcoholic who plays the horses and is obligated to Pappas for $2000 for his latest gambling debt. Both Harry (a World War II veteran) and Johnny are suffering the mental scars of their war experiences. Rooting for Johnny to go to college is his former grade school teacher Miss Jones, a resident in their building, who had opened a new world to Johnny with books. 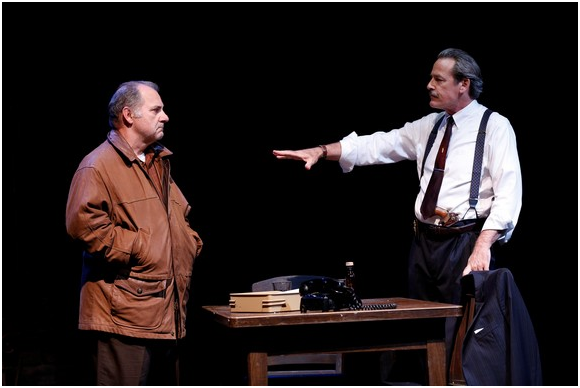 in a scene from Almost Home

Although the characters are very believable, they are too much stereotypes as we only learn one thing about each and they talk about the same things over and over. There is no back story other than the relationship with Pappas over the previous eight years. The actors are only asked to play one dimension to their characters. The only thing we learn of Harry and Grace’s marriage is that she has been dealing with his drinking and gambling since 1945. We are to believe that Harry’s guilt over his actions in the war causes him to drink. The play also does not deal with Grace’s being his codependent and putting up with this all the years of her marriage.

Harry is on a temporary leave of absence from his job of 34 years as a telephone company lineman but we are never told why. Although Miss Jones taught Johnny in third grade, we are to believe that she has been an influence and part of his life ever since. On the other hand, Pappas had taught Johnny to box as a teenager and may be expecting him to go back to that avocation. While the play flirts with what dreams must be sacrificed to protect the ones we love, the stakes never run high and the tension never seems to increase in the course of the play. Though sinister, the suave Pappas never seems very threatening which diminishes the threat that he poses if he doesn’t get his way. The abrupt ending solves few of the questions posed other than the main one. And most damning, Frank Gilroy’s Pulitzer Prize winning play, The Subject Was Roses, covers this same material with much greater depth.

While director Michael Parva has not solved the play’s problems, he keeps the pacing moving as quick as a trot and has helped the actors flesh out their characters. Ziemba makes a fine, caring mother. Lisi has the evasiveness of the confirmed alcoholic and petty gambler. Brenda Pressley is both dignified and shows her integrity as the African American teacher not afraid to stand up to the corrupt cop. As Captain Pappas, James McCaffrey has the easy charm of the unethical man who is used to getting his way. Orsini has the most difficult role as the conflicted veteran which he handles well, but the play doesn’t give him much wiggle room to reveal any other qualities.

The realistic working kitchen setting by Harry Feiner is extremely memorable, and also contains suggestions of two rooms at the precinct. Michael McDonald’s costumes are hardly noticeable as they are exactly what these people would wear. The sound design by Quentin Chiappetta includes the evocative radio broadcasts which perfectly bring back the 1960’s. Graham Kindred’s design suitably changes the lighting from the dimly lit precinct scenes to the bright Barnett apartment.

Almost Home is an admirable initial effort from a new and talented playwright. However, this first play leaves many of its themes undeveloped or dangling when it is over. It does offer a compelling cast in an engrossing story which is a believable slice of life drama, an achievement not always accomplished.