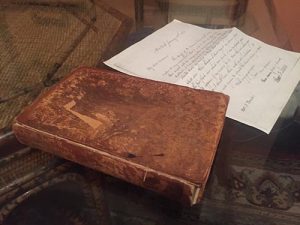 Recently the news was full of reports of another note in a bottle from the early 20th century, which washed up on some beach and was discovered by an awestruck passerby… it’s something conjured up by Hollywood screenwriters.  But interestingly enough, I recently discovered a 202 year-old letter in an ancient book… right here on the bookshelf in my New York City apartment.  Surely no one had opened this dusty old volume: The Collected Sermons of the Archbishop of Canterbury- in over 200 years—why would they? Otherwise they would have found the letter that I found.  The religious book had been published in London in 1752 and had been on my shelf for decades, inherited and untouched, as are many of my antiquarian books.  This is a volume I inherited from my longtime partner, and it was passed down thru his family somehow, until it reached my bookshelf.  One day I decided to browse through this book, handling it carefully like a museum piece because the front and back covers are very loose and as I turned the fragile pages, I stopped at page 114 when I discovered a yellowed piece of stationery folded and placed inside.  I’m not sure what I expected, but as I opened it, the dateline at the top of the letter immediately grabbed my attention and forced me to sit upright:  in an elegant longhand script (obviously written with a quill) it said:  “New-York January 15, 1814.”

One is accustomed to seeing letters like this behind glass in museums or the rare papers section of the New York Public Library, but certainly not in one’s Manhattan apartment. A rather formal and polite letter-distinctively proper- it was no doubt written in flowery archaic language on once-white stationery 8 inches wide x 10 inches. It was a letter from a gentleman to a lady. From the simple, yet elegant letter, it appears that the gentleman was an Episcopal priest, writing to inform the lady parishioner of the illness of a certain “Dr. Harris” and he uses poetic terms such as “my fair flock”. It’s signed “Your sincere friend & servant, Samuel F. Jarvis.” Samuel was abbreviated Saml. which apparently was customary at the time. My educated guess is that this was perhaps a “first draft” of a letter which wasn’t sent for some reason. Since paper was precious, the back of the letter contains “scribbles” in the same handwriting, which look like notations of Bible verses, possibly for an upcoming sermon?  The letter is written to a Mrs. Bristow (or Brinton perhaps, the writing is hard to decipher). 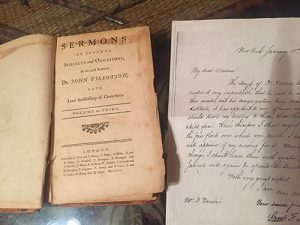 The letter also mentions St. James’ Church so with a little googling, I was able to discover that this refers to the famed Upper Eastside Episcopal congregation. Apparently, the author of the note, Samuel Farmer Jarvis was the first rector of St. James Episcopal Church, beginning in 1810.  I tried to contact the church to share my excitement and perhaps have a comment but no one got back to me.  A bit of googling tells me that Jarvis lived 1786-1851 and was 28 years old at the writing of this letter to Mrs. Bristow. I was hoping the church returned my emails so I could find out if this lady was in fact part of the original congregation.  Originally the church was located in lower Manhattan, and like the rest of New York, migrated northward over the centuries. The current church was built on a hilltop in 1924 at Madison Avenue and E. 71st Street.

St. James was founded to serve as a summer chapel for New Yorkers with country homes north of the boundaries of New York City (basically north of Chambers Street) when much of Manhattan was still villages and countryside and long before Central Park’s construction. Today the church is a well-known fixture in the “museum mile” district of the Upper Eastside…down the block from the Frick and many private clubs and schools. The faux-gothic church is located next to the elegant former 1898 residence of Gertrude Rhinelander Waldo which is now the Ralph Lauren Polo store.

St. James is also a few steps away from 740 Park Avenue, which is considered “the best address” according to Michael Gross in his 2006 book:  “740 Park Avenue, the Story of the World’s Richest Apartment Building”. 740 Park Avenue was once the home of John D. Rockefeller Jr., Mayflower descendants and various “society” families including many billionaires and titans of industry. Young Jacqueline Bouvier Kennedy Onassis grew up in this building at her grandparents’ apartment after her parents’ rather public divorce. On April 6 of this year, the building suffered a major fire which was covered by all the local news outlets and caused severe damage to the elegant 1929 landmark designed by Candela & Harmon.

More googling tells me that January 15, 1814 was a Saturday. The letter was obviously not sent which must be how it ended up in my crumbling book of sermons…perhaps Rev. Jarvis just put it away because it distracted him from preparing his Sunday sermon, and then forgot about it, to be discovered by me two centuries hence. Here is the complete note:

The illness of Dr. Harris being such as to render it very improbable that he will be able to officiate this winter, and his congregation being consequently left destitute, it has appeared to me of more importance that I should devote my services to them, than St. James’ should be kept open. While therefore, I shall regret my absence from the fair flock over which you preside, I am confident you will approve of my reasons for it. Were they not under your charge, I should leave them with greater reluctance. St. James’ will again be opened the second Sunday in April.

I am, dear Madam,

The entire letter…really it’s just a note… is unremarkable except for its extreme age and that it’s a charming throwback of quiet, elegant manners from another era. And of course the fact that all the years this little note has been waiting to be found in that book, history has unfolded. As a longtime New York history buff and parttime guide for small groups, I was so glad to be the recipient of this discovery and completely amazed and a bit dazed by it.  As I sat holding the letter for awhile on the day of its discovery, soaking it in, I was imagining all the things that have happened in the world since 1814 when the letter was completed and placed in the book. The first thing that occurred to me was the letter was written while the War of 1812 (1812-15) was happening. There were only 15 stars on the flag then—in fact, Francis Scott Key’s Star Spangled Banner wouldn’t be written for another 9 months during the Battle of Baltimore and the siege of Fort McHenry in September of 1814! James Madison was currently serving as the fourth president, and in seven months his wife Dolley would make history as she courageously escaped the President’s House on August 24, 1814 when the British burned the “new” capital city of Washington D.C.  During the subsequent re-building the house’s blackened façade was covered with white paint which gave it the new name The White House. 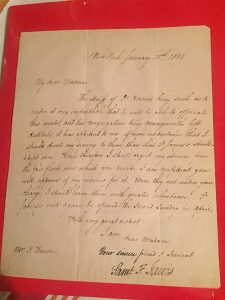 mehow time travelling…. imagining all the people yet to be born and the inventions and discoveries yet to happen when this letter I was holding was penned. Most of the Greek Revival “landmark” houses in Greenwich Village weren’t built till 1830 or 1840!

In 1814, Abraham Lincoln was only 5 years old; the California “gold rush” was 25 years away;  the “wild west” with its covered wagons and cowboys hadn’t yet happened—in fact the Louisiana Purchase was only 11 years old and Lewis & Clark’s expedition had only been completed a few years before this under Thomas Jefferson, who was still living in retirement on his farm in Virginia! So much had yet to happen when this letter was put in the book in 1814!  New-York still had a hyphen and the city’s grid system of streets had just been laid out in 1811 and was in the process of being implemented. Slavery wasn’t repealed in New York until 1827 and not until 1865 for the rest of the country! The Civil War was still decades away in 1814, World Wars were yet to happen, the Statue of Liberty’s artist wasn’t born yet, Ellis Island wasn’t even imagined, the industrial revolution later would explode followed by countless inventions and on and on. As I looked around my bookshelves, I began to realize that this letter was written before 90% of the authors on my shelves were even born.

In all the years since that note was put in the book, New York City has grown into the giant metropolis it is now– And thru all of this, that little letter from a priest to a lady parishioner, was left in the book which acted as a time machine and passed it down thru generations until the day I decided to open it.